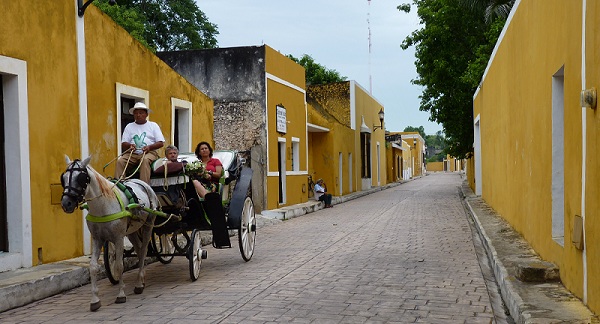 Two hours outside of Cancun, we turned off the main highway and into the small town of Piste. And at this point, our road trip officially began.

The goal was to spend two days driving around the Mexican state of Yucatan, a state that offers a major change from life in the state of Quintana Roo, the state where Cancun, Playa del Carmen and Tulum dominate the entire tourism industry of Mexico. Yucatan, on the other hand, is no tourist mecca, apart from the Mayan pyramid of Chichen-Itza which receives daily busloads of day trippers from the more touristy areas near Cancun. Remove Chichen-Itza and you have a large region that provides a most unique insight into Mexican culture and more specifically, into modern day Mayan culture.

Perhaps you’re thinking, “Mayans? I thought they were only an ancient civilization?”. I once thought that as well, right until I arrived to Mexico last year and began seeing signs in the Mayan language, a language that has no resemblance at all to Spanish and is still widely spoken in these parts. The Mayans have been around for a long time, more than 4000 years in fact, and yes, they are still around, with many of their communities being located in the state of Yucatan.

THE VILLAGES OF YUCATAN

Starting in Piste, we rolled along the narrow, quiet roads that led us straight through the dense jungle of the Yucatan. And as if my mood hadn’t been lifted enough by the scenery, thousands and thousands of beautiful yellow butterflies suddenly filled the air around us, as if they were welcoming us into the heart of Mayan country. For over an hour we drove through the butterfly-filled jungle and my mouth and eyes remained wide open in awe the entire time.

Every now and then we would reach a Mayan village, evident by the village names that were difficult to pronounce and which one would never expect to find in Spanish-speaking Mexico.

We passed through such communities as Xanaba, Citilcum, Tixpehual, Yokdzonot and Tixkokob, and each village offered another glimpse into Mexico that simply is not possible while living in or visiting the usual vacation hotspot that is the Riviera Maya. 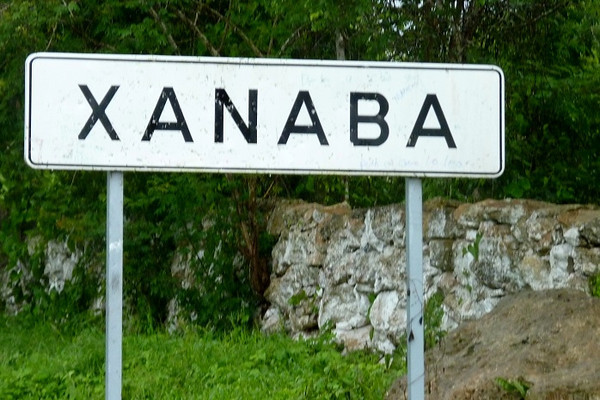 In the late afternoon of that first day in Yucatan, we found ourselves entering the 15,000-person town of Izamal. This town is designated a “Pueblo Magico” (Magic Town) by Mexico’s government, a designation given to towns that offer visitors a ‘magical’ experience due to their unique cultural, historical or natural significance.

And if there’s one thing you can say about Izamal, it’s this: It is yellow. I’m not talking about the flowers or the butterflies or even the signs in the streets. I’m talking about every single building being the exact same shade of yellow.

The result is one impressive looking town, which is why, moments after our arrival in the town center, we couldn’t wait to begin wandering around. Everywhere I looked I saw yellow and it literally made me giddy with delight. Every time I looked down another street, it naturally turned out to be just as yellow, if not more yellow, than the previous street, and as a result, I felt the need to yell out, “That street is yellow!” every single time (much to the annoyance of everyone around me of course).

We wandered across the soothingly peaceful central plaza, full of street vendors and locals chatting to each other while sitting on wooden benches under the shade of the trees. We visited the Franciscan Convent, built atop the remains of a Mayan pyramid, a convent where Pope John Paul II gave a speech to local indigenous groups back in 1993 and which is, of course, as yellow as all of the other buildings in town. From the convent we roamed further away from the center of town, eventually locating the Kinich Kakmo pyramid, a most impressive Mayan ruin site that almost never gets a mention in any tourism material.

Upon our descent from the pyramid, and just as the sun began to set, we unanimously decided to spend the night in Izamal. We quickly booked a room at the simple yet atmospheric San Miguel Arcangel Hotel, located right on the central plaza, with views of the convent and much of the town from our balcony.

And once we threw our bags on the beds, we were off again, this time to eat some Yucatecan cuisine at a local restaurant (where we ended up watching an intense ping-pong game that was taking place inside of a 24-hour coffin shop across the street).

Then, with stomachs full, we took a seat on a bench and enjoyed a lengthy rest while observing the mellow activity of a Saturday night in Izamal. Families ate and laughed together, children zoomed around on skateboards and bikes, a few elderly men played their guitars under a tree and horse-drawn carriage taxis came and went, bringing people wherever they needed to go.

I was a happy man as I sat there on that bench, so much so that I found myself on several occasions imagining what it might be like to live in Izamal for a few months. There is something magical (hence the label by the Mexican government) about such isolated locations, locations where life is simple and what we consider to be important worries and stresses of our normal daily lives no longer exist.

Some people may find such a town boring and I can certainly understand that. But for me, I find such a town to be both healthy and intensely appealing. Maybe it was just all that cheerful yellow.

On the last day of our road trip we departed Izamal and drove to Merida, the capital city of the state of Yucatan, where we spent half the day wandering around once again, visiting a couple of museums, enjoying the festival in front of the cathedral and eating local food that cannot be found anywhere else in Mexico.

But I must admit, despite the striking multi-colored buildings and the energetic and positive atmosphere of Merida, a city of one million people, I spent much of the time thinking about Izamal and the other villages and towns we passed through the day before.

And when the time came to leave Merida and begin the long drive back to Playa del Carmen, I did not hesitate for even a moment in choosing the route I would take. There was no way I was going to get on the toll highway and speed straight across the jungle, all the way back to the Caribbean coast.

So I turned off the main road and entered the village of Kantunil instead. It would be local roads one more time as I wanted another opportunity to experience the atmosphere of this region.

And as we passed through the small Mayan villages of Kaua, Cuncunul and Ik Kil, communities that few travelers reach, I was once again reminded that such a simple, traditional way of life has much to teach those of us who struggle to find peace in the modern world.

Have you been to the state of Yucatan? Does it sound like a region you would be interested in visiting?