If the Wiener Schnitzel that I ate at the Plutzer Brau restaurant in the center of Vienna last week was not the largest Wiener Schnitzel ever created on this grand planet of ours, I shall shave my head and eat only cold soup for the remainder of this trip. Or maybe I’ll just travel to whatever restaurant serves a larger Schnitzel and eat two of them in one sitting.

But really, even though the Plutzer Brau itself does not claim to serve up the largest Wiener Schnitzel known to mankind, I really do find it quite difficult to believe that a larger Wiener Schnitzel could possibly exist.

This restaurant, which was hand-picked by my local friend Rudi, is a local establishment that is not only quite difficult to find but is also quite worth the trouble of finding it. Even Rudi got us lost a couple of times en route as the restaurant is located in a far corner of a small, relatively hidden lane, the entrance to which looks like every other lane in the neighborhood.

But once you do take your seat at one of the outdoor tables at the Plutzer Brau, you can then be certain that a high quality, Vienna-style evening meal will soon be served. And if you want to try out the specialty of the house, you have no other option but to order the largest Wiener Schnitzel.

That is exactly what I did and about twenty minutes later, this is what the waiter placed in front of me…. 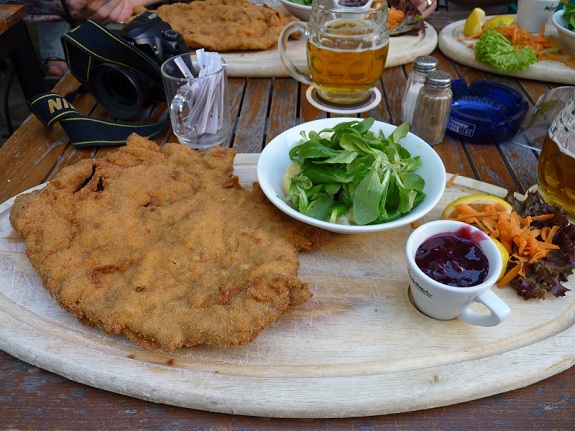 For someone with such a huge appetite as myself, I also have no problem admitting that I struggled, struggled tremendously in fact, to finish this meal. In the end, I did manage to eat it all, as did my friends Rudi and Fabian, but we did need an abnormally lengthy amount of time to do so as every bite presented an even greater challenge than the previous one. We were full after five bites but the Schnitzel was so good that it was impossible to put the fork down.

Eventually, we did each reduce our individual Schnitzels to one final bite and once that last piece disappeared into our mouths, we were then forced to remain in our seats for about an hour and a half afterward. While sipping schnapps and groaning from the pressure placed upon our overstuffed bellies, we let the food digest long enough so that we would have enough strength not only to lift ourselves out of our seats, but to walk to the proper Underground station in order to travel back to Rudi’s apartment. Even after waiting so long this was still no easy feat.

Of course, this short post certainly wouldn’t be complete without a few more photos that show how, piece by piece, that massive Wiener Schnitzel went down… 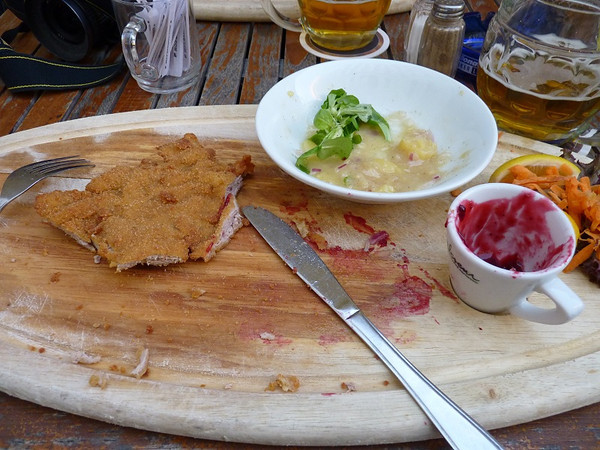 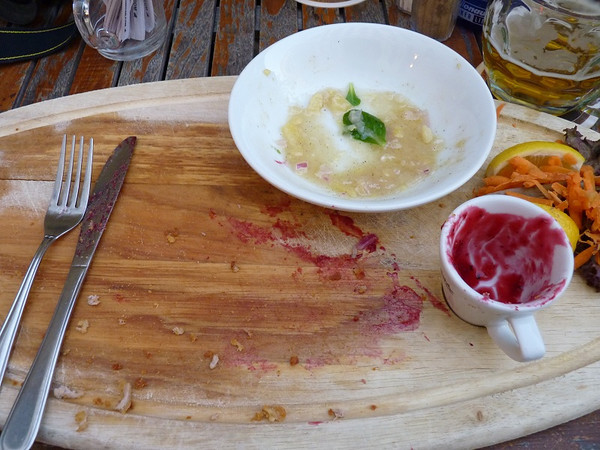 And just in case you might be wondering how many Wiener Schnitzels have been eaten so far this year in Vienna, here’s the ‘official’ Wiener Schnitzel counter that is located in one of the Underground stations…as you can see, quite a significant amount of Schnitzel has been enjoyed.

I really hope that none of you inform me about a Wiener Schnitzel that is even bigger than this one!