Why You Should Visit South Caucasus

Why You Should Visit South Caucasus 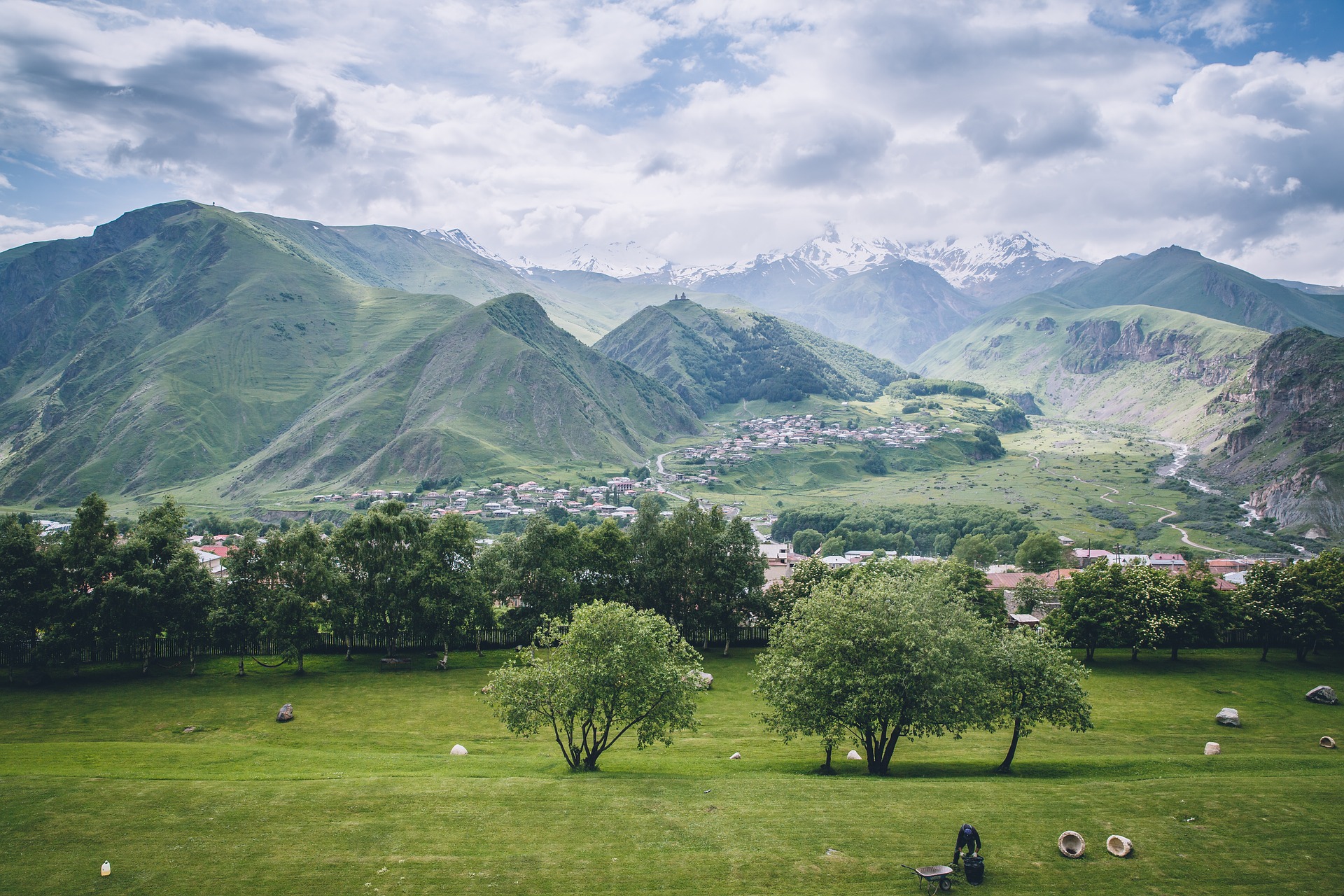 Mysterious and exotic, full of enigma and charm, Caucasus tours are filled with alluring landscapes and lovely people that are sure to take your breath away.

Flanked by the Black Sea to the west and the Caspian Sea to the east, the Caucasus is home to the Caucasus Mountains, including the Greater Caucasus mountain range, where Mount Elbrus, Europe’s highest peak, rises majestically over Eastern Europe and Western Asia. Predominantly occupied by Azerbaijan, Armenia and Georgia, the Caucasus is so diverse and varied that visiting one village to another feels like stepping into a different world.

Traveling to the Caucasus used to be a trip off the beaten path. However, the introduction of the eVisa, made access to the region more convenient and affordable. For those who want to experience the region’s abundance of marvels, here is our ultimate travel guide to Caucasus.

Nestled between Asia and Europe, Azerbaijan is a compelling mixture of both continents. Yet, it is neither Asia nor Europe. It is a mesh of contrasts and variety, ancient and contemporary, rural and urban, quaint and stylish. From the medieval castles dotted all over the country to the modern Flame Tower skyscrapers that decorate the capital city of Baku’s skyline, Azerbaijan is distinctly Azerbaijan.

Azerbaijan’s rich culture and heritage, colorful history, architecture, and diverse landscape, make it a reservoir of unique experiences. History enthusiasts can explore Icheri Sheher, Baku’s walled Inner City, which features the UNESCO World Heritage Sites of the Maiden Tower, and the Palace of the Shirvanshahs.

At the Martyrs’ Alley and the Eternal Flame Memorial, visitors can pay tribute to the demonstrators killed by Soviet Troops in the infamous Black January in 1990. A stroll along Baku Boulevard with its amusement park, fascinating bars and cafes, and an unobstructed view of the Caspian Sea, would soothe any weary traveler.

The country’s attractions are not confined to its capital. Azerbaijan has a diverse assortment of landscapes, from wetlands and mountains to arid wastelands and lush valleys. Along Absheron Peninsula are mud volcanoes and a burning hillside caused by gas leaking through crevices in the earth, a phenomenon which earned Azerbaijan the title Land of Fire.

In the highlands are idyllic rural villages clustered amidst plush orchards set against a backdrop of blue skies and the Great Caucasus Mountains. Due mainly to its unique climate and terrain, the country enjoys abundant biodiversity, making it a paradise for nature lovers and wildlife enthusiasts.

Yet, Azerbaijan’s greatest treasure is its people. In Azerbaijan tradition, a guest is not allowed to leave the house without a cup of tea, a practice that attests to the locals’ hospitality and warmth. The same aspects are reflected in Azerbaijani cuisine. The richness of the dishes mirrors the people’s love for family and good food. If you’re lucky you might witness locals make the popular dolma, a dish made from grape leaves and stuffed with minced meat. So historically significant is the dish that in 2017 dolma making was included into the UNESCO Intangible Cultural Heritage Lists.

Often overlooked as a tourist destination, Armenia is a cache of fascinating cultural heritage, awe-inspiring landmarks, incredible sceneries, and warm, friendly people. The country’s past, although laced with pathos and tragedy, is a testimony of Armenians’ courage and resiliency. An excursion to this ancient and mystical country is as fulfilling as it is enlightening.

In 301 AD, Armenia became the first country to adopt Christianity as a state religion. The Armenian King Trdat III begun building Christian churches, including the Etchmiadzin Cathedral, the oldest one in the world. Armenia’s religious history is evident in the extraordinary medieval monasteries scattered across the country.

Armenia’s terrain is mostly mountainous, crisscrossed by swift-flowing rivers, and dotted with sparse forests. The dramatically striking landscape is ideal for trekking and other outdoor activities. In the Armenian highlands, you will find Lake Sevan, famous for its crystal waters that switch colors, from azure to deep blue to turquoise, depending on the time of the day.

Perhaps the most iconic natural landmark in the country is the biblical Mount Ararat, located on the Armenian-Turkish border. The mountain’s snowcapped peak is visible from many parts of Yerevan, Armenia’s capital. Yet, you can witness its most breathtaking view on top of the Yerevan Cascade, an enormous stairway made of limestones.

All of the above clearly makes for a perfect road trip as well. Hiring a car should be considered in order to ensure you reach as many of the most impressive sights as possible. With small guesthouses located in most towns and even opportunities for camping, just pack up your stuff and go. If you take something like a Berkey water filter with you, you’ll be able to reach even the most remote areas knowing you have access to clean water too.

A visit to Armenia is incomplete without experiencing its sumptuous cuisine. Kick-off your gastronomical quest with spas, a creamy soup made from fermented yogurt. For the main dish sample kyufta, Armenia’s version of meatballs or khorovats, its version of barbeque. To satisfy your craving for a hearty snack, try basturma, dried meat coated with garlic and fenugreek, usually wrapped in Armenian pita bread. Complete your meal with the famous Armenian golden apricot or with a piece of kadaif, a dessert made of shredded dough soaked in sugar-based syrup and layered with cheese and chopped nuts.

By far, the most visited country in the South Caucasus, it offers a wide range of activities that would excite even the fussiest traveler. Its capital Tbilisi has a throbbing nightlife, an impressive array of world-class restaurants, and a chill hipster vibe that attracts people from around the world. However, Georgia’s most valuable attribute is its people. Friendly, proud, warm, and lively, Georgians take hospitality to heart.

Despite its tiny size, Georgia boasts of diverse landscapes, from the picturesque beaches along the Black Sea coast to the vast ski resorts on the surrounding mountain ranges. All across the country are lakes, rivers, and therapeutic hot springs, such as the one in the Borjomi, a renowned health and wellness destination since the ancient times.

Georgia’s attractions are also as varied as its unique landscape. In the north is Shatili Old Town, a spectacular collection of defensive watchtowers and flat-roofed houses clustered tightly on a steep hillside. In the south is Vardzia, a sprawling cave monastery dating to the 12th century, while in the east is the historical province of Kakheti, a premier wine growing region, a mecca for wine connoisseurs and those aspiring to be.

In the west, you’ll find the Gelati Monastery, a monastic complex that was established in 1106 and a UNESCO World Heritage Site. A short drive north of Tbilisi is the ancient city of Mtskheta, the former capital of the country. Here you will find the Svetitskhoveli Cathedral, another structure recognized as a UNESCO World Heritage Site because of its outstanding architecture.

While in Georgia, you should sample the wine. Some historians believe that Georgia has been producing wine for over 7, 000 years, making it the birthplace of the drink. Take time to enjoy the best Georgian wine along with delectable Georgian cuisine in the company of welcoming locals, and you’ve got yourself an experience of a lifetime.

The wonders and mysteries of the Caucasus are waiting to be discovered and explored. Booming Baku, artistic Yerevan, and cozy Tbilisi – the cities are as multi-layered as the heights and dips of the mountain ranges. Whether you’re looking to satisfy your gastronomical cravings, delve into the vivid history of the region, or immerse yourself in a culture that is distinct yet familiar, there is always something for everyone in the Caucasus.