Why I Won’t Attend Another Music Festival

Why I Won’t Attend Another Music Festival 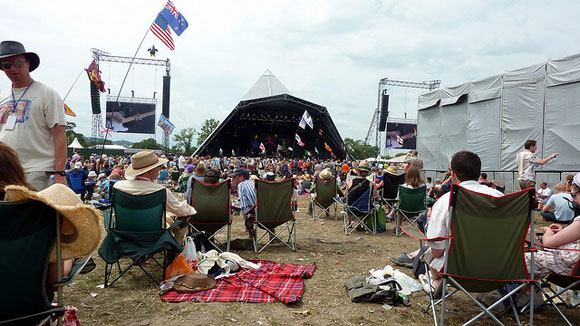 Something flew onto my upper lip and I woke up. In my exhausted state, still half-asleep, my attempts to swat whatever was bouncing around my face, nearly ended up giving me a bloody mouth. The insect swooped down again and hopped from my left cheek to my left eye before gently coming to rest on my nose. I swatted again, hitting my nose with more force than I would have liked.

The problem then grew when I felt a second moth flying around my face, and it became even worse as I felt three and then four and before long, dozens of moths attacking me from all angles. It was a full on offensive that left me wondering how on earth all of these moths got into my tent in the first place.

At one point, I opened the flap of my tent and tried to force all of the moths outside with large swooping motions of my arms. It didn’t work and instead, they actually seemed to grow in number, as there were now even more moths attempting to fly into my ear canals, up my nose and even into my eye sockets, all at the same time.

The rain outside forced me to remain in my tent and while I could have buried myself in the depths of my sleeping bag and wrapped my face in a t-shirt, I was determined to get rid of these moths.

Unfortunately, I failed. But after a couple of hours, my exhaustion became too much once again and despite the crazed moths, I somehow managed to fall back asleep.

The above tale took place two years ago during my last visit to Australia, while I was attending the Meredith Music Festival with some friends, an annual festival that takes place in rural Victoria. Before the festival had begun, I was undoubtedly excited to spend some time in the country, listening to good music, especially upon hearing that the forecast called for near perfect weather for the duration of the three-day event.

The problem began, however, when, at the exact same second that we drove through the entrance gate of the festival, the rain began to fall. Fifteen minutes later, as my friends and I tried to set up our tents on a muddy patch of land, the rain poured down with greater force. By the time we made our way down to the main stage and began listening to some music, we could barely see the stage through the rain.

And on that first night, at around 9:00pm, after shivering under a tree while holding a broken umbrella for 8 hours and listening to bands that I no longer cared about, I wandered back to my tent wanting nothing else but to fall asleep.

Fall asleep I did. But as soon as I drifted off, that’s when the moths arrived.

After my exhausting battle with the moths, I woke up the following morning to the flap of my tent flapping around in the wind. I apparently forgot to shut the flap after trying to shoo the moths away during the night. Climbing out of my sleeping bag, I looked for my glasses but couldn’t find them anywhere and so I decided to step outside into the blurry world for a big morning stretch.

Well, it turns out that I had not battled an army of ferocious moths during the night at all. Instead, there had been a large hole in the side of my sleeping bag and as a result, the feathers had been pouring out of that hole, one by one, flying all around the tent and landing all over my face….and hair and every other part of my body.

So there I stood in the rain for all Meredith festival-goers to see, completely covered from head to toe in a thick layer of white feathers. 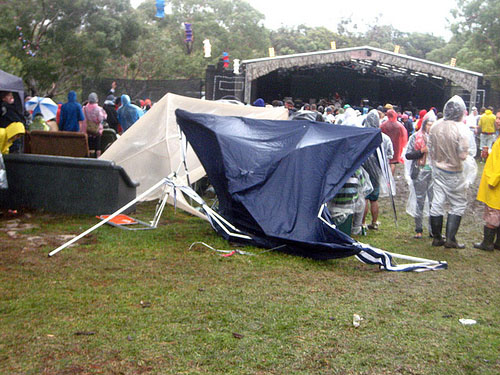 Day two of the festival played out much like day one with record amounts of rain continuing to fall. The only difference was that I was covered in feathers all day and when I returned to our campsite in the evening, my tent was flooded. However, despite seeming like a most unfortunate occurrence, after a quick look around me I actually felt quite thankful. One of my friend’s tents had literally blown away and was now sitting upside down about 50 feet from its original site and my other friend’s tent had completely collapsed and now lay in the middle of a large muddy puddle.

Fully soaked and just wanting to get some decent sleep again, I stumbled all the way back towards the stage and asked my friend who drove us to the festival for the keys to her car. I then put on every piece of dry clothing I had, sat in the driver seat and tried to sleep. An hour later, every door to the car opened simultaneously and my friends all piled in, having no other place to sleep as well.

So that’s how we passed the second night, with five of us packed into a small car, all sitting there wet, cold, stinky and grumpy while trying to fall asleep with heavy winds and rain beating down on the outside of the vehicle. Not a word was said, but I’m quite sure that every single one of us would have traded the few musical acts we did manage to see for a few hours in a heated room with a comfy bed.

In fact, these days, whenever I even hear the words “music” and “festival” mentioned in the same sentence, I shudder and immediately walk away. Just a few weeks ago, when I arrived in Melbourne for my current visit, my friends asked me whether or not I would be attending the Falls Music Festival or the Golden Plains Festival this year.

Not a chance. Call me old or boring, or call me both, but my Music Festival days have come to an end.