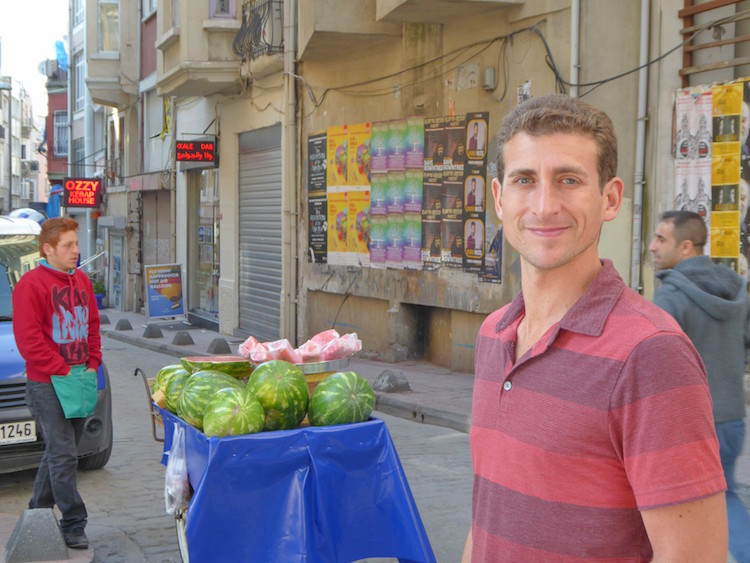 During the three days I spent in Istanbul earlier this month, something didn’t feel right.

Sure, I followed the general routine that I usually follow, and have enjoyed greatly, during my earlier travels to this city. I booked a private room at the friendly Cheers Hostel, I returned to my favorite eateries scattered around the back streets and lanes of a variety of neighborhoods, I smoked shisha at my favorite nargile cafe located in a beautiful 300-year old ex-school-turned-market situated behind a small cemetery, and I spent time each day admiring some of my favorite sights.

But on this occasion, as I did all of the above, I didn’t feel as comfortable as I have felt on those previous twelve or so visits. I couldn’t get in my travel groove for some reason and as a result, I wasn’t enjoying everything I was doing as much as usual.

It’s difficult to pinpoint what exactly was different about it all, but I can say for certain that I noticed something, and it bothered me, and to an extent, worried me too.

At one point, I even commented to another traveler I had met, as we walked through the park situated between the Blue Mosque and the Hagia Sofia, that the lack of a police presence in this most touristy section of this well-traveled city was bizarre considering how much of a target this area must be. This observation only added to the heavier-than-usual atmosphere I was feeling.

Everywhere I went, this city which I love very much and have so many incredible memories from, felt more and more unfamiliar with each passing hour.

And as a result, after a short three days, my gut starting telling me, quite clearly, to get out of town.

Deciding to trust what I consider to be my well-honed traveler instinct, on my third night in Istanbul, I booked a flight to Bucharest for the very next morning. I woke up early, took the tram and metro to the airport and off I went to Romania, a short one hour flight away.

The next day, the attack happened in Sultanahmet. Ten tourists were killed, a mere 400 feet from where I was staying, at the exact spot that I had walked across far too many times to count during this three day visit alone.

Is The Traveler Instinct Real?

The idea of a traveler instinct is an interesting concept.

As someone on my FB page recently commented, this ‘instinct’ can sometimes be attributed to confirmation bias, where we have our preconceived notions about a particular destination and the people who live there, and as a result, we interpret all that we observe in a way that fits those already-held ideas.

While I agree with that to an extent, and I’m sure it’s sometimes the case, I don’t think it’s the full explanation.

I certainly had completely opposite ideas of what my time in Istanbul would be like on this occasion, based on all the overwhelmingly positive experiences I had in that city over the past ten years. From the moment I booked my flight to Turkey, I assumed that I was going to return to a place that always emitted a positive vibe (at least to me as a traveler) and that always gave me a positive travel experience.

One could also say that since I was looking for such a positive experience, anything that didn’t fit that mold could be seen as stranger and more negative than normal. Perhaps, but in my opinion, it’s unlikely considering that I’ve certainly learned by now that things don’t always go according to plan and I generally accept whatever comes my way without much disappointment.

Besides, this isn’t the first time I’ve noticed my traveler instinct.

I’ve now caught three people over the past five years who were trying to pickpocket me. The first time it happened, I was walking down a busy street in Mumbai and suddenly, I had a feeling that I should turn around. Sure enough, I caught a man with outstretched arm reaching for my back pocket where I happened to have left some money.

And it’s not as if I had been turning around every two minutes thinking that everyone around me might be trying to steal my stuff.

There was no indication that anything was happening except for a gut feeling at that very moment. Maybe I subconsciously saw his shadow, maybe I heard footsteps more closely than normal behind me, maybe I noticed a sudden crowd around me and realized the increase in risk that a pickpocket would operate in this area. I have no idea, but the point is, I felt something that made me turn around, and that feeling turned out to be right.

So there has to be more to it.

How We Develop A Traveler Instinct

Of course, we are not usually aware of this process. We are only aware of the end result (the instinct) which tells us that a certain situation is normal, safe, unsafe, strange, or anything else, so that we can act accordingly. Suddenly we just know what to do, we make decisions on the fly based on our fine-tuned instincts.

This is especially true when we travel to the same destination more than once. The collection of data we have in our brains about how things are supposed to be in that particular location is obviously greater the more times we visit and the longer we stay, and that helps us interpret everything around us more quickly and, probably, more correctly.

This is what I felt in Istanbul, a city I know very well. I had so much previous experience to compare everything I was now seeing and feeling to that I was even more confident in what my gut was telling me. That’s why I left when I did.

Who Needs Real Proof? Not Me.

Of course, maybe this is all nonsense in the end. Maybe there’s nothing to this traveler instinct idea at all.

Is it just luck?

It’s not as if I have much in terms of real proof.

It’s not as if I have a long list of tragedies or robberies or attacks that my own instinct has helped me narrowly avoid over the years. That’s not the case at all.

The reality is that it’s quite difficult to know exactly what this traveler instinct has done for me since I generally rely on it to make sure I don’t end up in trouble, not necessarily to help me get out of serious trouble. What it has helped me avoid is something that there is no way for me to be aware of.

But after all of this travel, I really do feel a traveler instinct within, one that seems to improve over time, and one that seems to be working quite well. By paying attention to this instinct as I’ve navigated the world over the past sixteen years, both myself and my possessions have remained remarkably safe in such a wide variety of destinations and situations.

And after this recent Istanbul experience, it would be difficult to convince me that it’s the result of something other than this traveler instinct.

Has your traveler instinct helped you at all? Do you believe this concept is real?