Why Have Travelers Stopped Talking To Each Other?

Why Have Travelers Stopped Talking To Each Other? 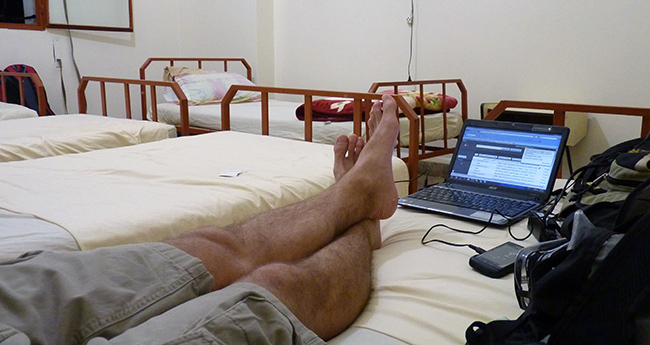 “So I’ve just arrived at Broome Backpackers [a hostel in Broome, Australia], staying four nights in an 8-bed mixed dorm room. It’s 9pm and there have been five of us in the room for the past hour. The other four have been on their laptops or mobile phones. Nobody has spoken. At all. Not one word.

I’ve been sitting here reading a book the entire time and now I just had to write you an email as I cast my mind back to our travels through India, Thailand and beyond several years ago, to a time when travelers actually conversed with each other.”

Fellow travelers, or those just starting out, that’s a sad email.

There indeed was a time when barely five seconds would pass between checking into a hostel dorm room and finding yourself talking with the other travelers in the room. People immediately introduced themselves, not with just a nod of the head and quick grumble of a ‘hello’, but by standing up, shaking your hand and asking some questions.

And inevitably, this would lead to more conversation, to other travelers joining in, to hanging out with these strangers who instantly became your pals. There was a time when every traveler was thoroughly excited about these interactions, realizing just how lucky they were to have such an opportunity to meet people from all over the planet.

Before we all became so caught up with technology, we instinctively spoke to those around us. Now we often just head back to the hostel in the evening, sit on a cushion or at a table or lie in bed and type away on our keyboards or mobile phones, keeping our heads down as we spend hours surfing the internet just for the fun of it.

I’m not saying that travelers don’t interact with each other at all these days. Of course we do. It’s just that I have also experienced countless situations such as the one my friend described above and I have also had a similar conversation about this very topic with so many travelers that there is no way to deny the fact that technology is seriously harming our ability to be social.

And when we travel, being social is what leads to the most rewarding experiences.

When I traveled to the Romanian town of Sighisoara last year, I noticed that the hostel owner was not exactly in the best of moods for a couple of days. When I finally had a chance to speak with him, he told me that he no longer enjoyed owning his hostel and was thinking of selling it. He said that he had originally created the hostel as a place where travelers could congregate and share and learn from each other but instead, it turned into a bunch of rooms where everyone just played on their laptops all day long.

He told me stories of not so long ago, maybe 3 or 4 years, when every single night a dozen or more travelers would gather in the common room, interesting conversations about an infinite number of topics would take place, everyone would cook together, drink together, have fun together, creating an atmosphere that the hostel owner simply labeled as ‘perfect’.

And now, that no long happens at his hostel and even worse, it no longer happens in many hostels, hundreds and thousands of them, around the world.

A Balance Between Technology & Socializing

I’ve written before about the death of random travel experiences due to technology. Instead of asking a shopkeeper in a foreign city for directions (and who knows where that might lead, possibly to an invitation to meet his family or enjoy a home-cooked meal), we just jump on Google Maps and off we go, missing out on that human interaction and its potential benefits.

And in my opinion, we also miss out when we don’t interact with our fellow travelers. It’s a shame that things are changing like this. It’s an even bigger shame considering that we are often on our laptops or iPads or phones while traveling not because we actually have something we need to do, but because these days, we almost don’t know how to do anything else. That’s a bit extreme I know, but it does seem to be heading in that direction.

So, what is it that makes us so willing to turn on the laptop instead of socializing with the other travelers around us?

Are we so eager to upload our photos and share our experiences with the entire world, a world that probably isn’t as interested in our travels as we would like to believe, that we’d rather choose an entire evening in front of our laptop over one filled with conversation and activity with interesting people we would never have met had we not been traveling in the first place?

I’m just as guilty as everyone else here and I’m not trying to deny that. I work online and so I spend a lot of time in front of my laptop while traveling. At the same time, whenever I am faced with a decision, which happens every day, as to whether I should be on my computer or whether I should look up, shake someone’s hand and get to know a new person on this planet, I like to believe that I do choose the latter option the majority of the time.

Again, I’m not saying we should all toss our laptops into the river…

To those who work online, as I do, keep on working online and making your travel dreams a reality.

To those who share their adventures on a blog, continue with that blog!

To those who upload photos and send frequent emails to family and friends, telling them all about your travels, don’t stop doing that either.

What I do believe is that we should always be aware of how much time we are actually spending in front of our technological devices while traveling and to make sure that we are not missing out on the greatest reward that travel is prepared to give us – meeting and interacting with new people.

Look up, say hello, put the laptop down every now and then and go have a drink with a stranger from your dorm room. Try to gather a few travelers together and cook a meal in the hostel’s communal kitchen. Or just go for a walk around town with a new friend instead of typing away on your keyboard in the corner.

While you might fall behind slightly in your work or with your blog or with your emails, or you might not have time to conduct random Google searches for things such as ‘yoda bat‘ and ‘talking oranges‘, you will be benefiting in ways you simply can’t imagine from the time you spend with your fellow travelers.

Any thoughts on technology and travel or on the change in hostel experiences that’s taking place? Have you noticed that many of us travelers are more interested in their gadgets than we are in interacting with each other?