When You’re On The Road, Sick & All Alone

When You’re On The Road, Sick & All Alone 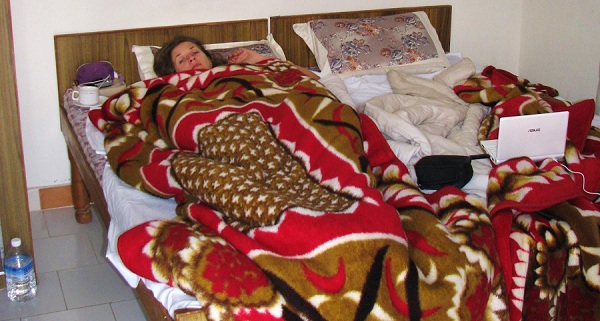 For the past week I’ve been battling the flu as well as the idea that I’m currently in the midst of experiencing my first real winter in over ten years. Even as I type this post there is an actual blizzard taking place outside, yes, a blizzard.

Bucharest is covered in snow, my nose is clogged and I’m stuck inside because I don’t own any boots.

This is the life of a traveler.

Of course, it is my choice to be in the middle of Eastern Europe during the middle of winter. I take full responsibility and I don’t regret for even a second this decision. I’m here because I want to be and if I do make it out of this winter alive, then I’ll add this experience to the list of the most incredible feats I’ve achieved in my decade plus on the road.

As for the flu, it certainly sucks being sick while away from home. Luckily for me it sucks a bit less since I don’t have a home to be away from. I don’t find myself spending hours alone in my room dreaming of my comfortable bed, of eating my favorite foods or of being taken care of and tucked into that bed by my wife.

It does so happen that I have some friends here in Bucharest and I’m actually staying with one of them. And her efforts to feed me endless bowls of chicken soup, platefuls of chocolate crepes and the occasional shot of homemade elderberry liquor have certainly helped make this the most bearable bout of the flu I’ve ever had to deal with.

And when I walked right into a wall in the middle of the night while in a state of complete delirium it was admittedly nice having someone direct me back to my bed.

But what if you are on your own, stuck in a blizzard or monsoon rains in the midst of your travels, completely sick as a dog and without a single person to comfort you? This definitely is a part of travel and it’s not exactly the most enjoyable part as you might imagine.

Over the years there’s been a couple of times when I’ve been sick and all alone in some random destination, times when I would stare out the window and wonder if I would ever feel better again or if achieving my travel goals was actually worth the suffering I was experiencing at that moment.

In general, I would deal with my sickness by rolling around in bed moaning in agony, shuffling outside once a day to grab the quickest food possible and trying to think how long it would take for someone to notice that I had died in my little hotel room.

But again, here in Bucharest I’ve been spoiled this time around. However, as I ate yet another bowl of delicious chicken soup, received yet another neck massage and downed another shot of elderberry liquor this afternoon, I did start to imagine what I would have done if my friend was not around.

What if I was on my own and terribly ill, stuck in some faraway town, unable to speak the language, wanting to do nothing but curl up and vanish from the Earth?

Any advice? What have you done when you’ve been sick on the road and found yourself dreaming of home? How do you think you would survive such a situation?