(Note: I was planning to spend some time in Thailand over the next two months but my plans have suddenly changed for a few reasons that I won’t go into now. After making a quick stop in Bali, I’m now actually headed back to the US. More to come about this change soon.) 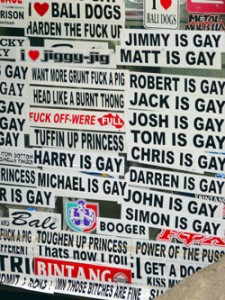 Never before in my life have I come across such a disgraceful scene of tourism gone wrong as what I encountered during my stay in the Kuta area of Bali this past week.

From the moment I arrived, I suspected that the Bali I had envisioned for so many years was not exactly the reality. Picture this: Drunken foreigners everywhere stumbling around half-naked while tossing trash on the ground and screaming out profanities to everyone they passed on the street. This is pretty much what I observed non-stop while staring out the taxi window during the 20 minute drive from the airport into Kuta. Combine this with a never-ending collection of western fast-food chains and clothing shops as well as tourist bars offering $1 tequila shots, and the beautiful, fantasy destination that is supposedly Bali was nowhere to be found.

And while I have nothing against tourism, or even the intense form of it that you find in many parts of the world, I have a problem with Kuta. To see the Balinese people, who are such friendly, gentle people by nature, become so corrupted by the influx of selfish, disrespectful tourists proved more than disturbing to me.

I can’t even describe what it was like to watch these kind, constantly smiling people be reduced to street vendors selling t-shirts that state “Do It Up the Bum, Avoid Kids” and “F**k You Bitch” and bumper stickers that read, “Mark is Gay”, “You’re a Homo” and “You’re Fat But I’ll F**k You Anyway”. This embarrassing byproduct of tourism was present everywhere I turned. Even the housekeeper in the hotel I stayed at pushed around a cart full of cleaning products that had a big sticker on it that read, “I Shit Fat People”.

And she had no idea what that even means, just as the t-shirt vendors had no idea what they were truly saying when they yelled out “Suck It Or Leave t-shirt for you, cheap price!” to every tourist that walked by. That’s the problem when tourism goes so terribly wrong. The local people are sometimes unknowingly forced to stoop down to the shockingly infantile level of a breed of tourists who should never be allowed to leave their home countries.

I firmly believe that the locals are not to blame at all. I blame each and every one of the oblivious tourists who show not an ounce of respect for Kuta, for Bali, for Indonesia or for any of the people they come into contact with. I have never seen such full-on disrespectful tourism in all of my years on the road, with such a concentration of people in one area who thought it perfectly acceptable to turn a foreign island into their own personal booze, drugs and sex playground.

And this leaves the local Balinese with no choice. If they want to earn some money to feed their children, their only option is to accept the nonsense and fill their shops with the “Damn Those Bitches Are Fine” t-shirts that the naked, constantly cursing tourists demand. After all, the locals wouldn’t be selling this crap if people weren’t buying it. The fact is, few visitors to Kuta are interested in buying traditional Balinese wood carvings. Actually, visitors seemed to be incredibly interested in buying wood carvings of penises instead (which were for sale in almost every shop). So you can’t blame a local for selling those penises in order to put food on the table.

Some might argue that similar transformations have taken place in other parts of the world such as Khao San Road in Bangkok or Cancun, Mexico. But I beg to differ. Having spent a good amount of time in both of these other locations, I find that, despite the heavy tourism, the corruption of the local people and way of life has been held in check in comparison to Kuta. Khao San Road, as unappealing as it may be to some travelers, retains a bit of Thai charm which seems to force western culture to adapt to Thai culture, not the other way around.

And as for Cancun, it is definitely an Americanized city, but it is also one that is quite pleasant to visit and if I may say, is full of tourists that show much more respect than what I found in Bali. And maybe I’ve just missed it but I have never seen anyone selling t-shirts and stickers that say “Want More Grunt, F**k Like A Pig” in Cancun.

The point is, while in Kuta, I felt absolutely ashamed to be a traveler. Ashamed is not even strong enough a word to describe what went through my head as I watched inebriated tourists bark out their demands for yet another bottle of Bintang beer while engaging in lewd conduct that simply has no place at all on Bali. Of course, each time, the young local waitress would simply take the order and smile, unable to react in any other way, even in the face of such blatant disrespect.

I know I’m not the only traveler to feel so strongly about this. In fact, my good friend Jodi from LegalNomads.com summed it up quite well when she wrote to me that during her time in Kuta, all she wanted to do was walk around with a big sign that said ‘cover your tits’ while tapping a few people on the shoulder and saying “I mean – you’re in the AIRPORT in a bikini…how is that ok?! (It’s not).”

To me, so much of what I saw in Kuta is not ok.

THE REST OF BALI

One important thing I need to mention is that this was a rant only about the Kuta area of Bali. During the time I spent away from Kuta, exploring the temples, volcanoes, lakes and other regions of this island, I did in fact discover the Bali that I originally hoped to find. The rest of Bali really is a treasure of a destination, one that maintains its local culture and in turn, offers interested travelers a very real glimpse into the Balinese way of life. 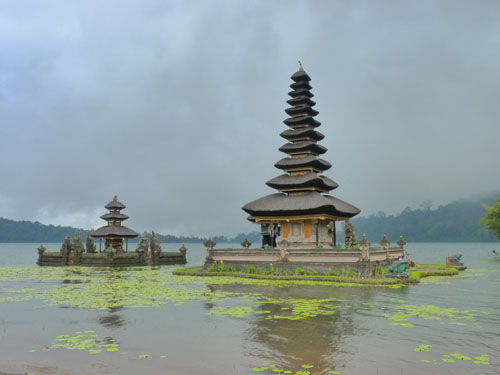 But as for Kuta, never again. And as a result of this visit, I will forever be even more conscious about how I act and how I present myself when interacting with a foreign culture. I certainly challenge you to do the same as well.

Have you been to Kuta? Any thoughts to share?