What’s Wrong With Visiting Our Parents?

What’s Wrong With Visiting Our Parents?

About a month ago, I was in a car that was driving down the FDR Driver in Manhattan when we suddenly hit some of that famous NYC traffic. As a result, and for quite a long time, there was nothing else for me to do except stare out the windows – at the buildings, at the bridges, at the people, at the East River….and at this sign:

(sorry for the poor quality, it was taken with my cell phone) 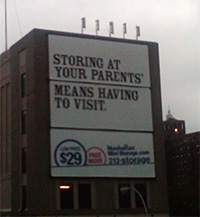 While at first this may appear to be just another billboard for a storage company, I must say that as soon as I read the words, I was stunned. Immediately, I pointed the sign out to my friend who was driving the car, but after glancing at the sign he just shrugged his shoulders. And not one person in any of the cars around us seemed to give this sign anything more than a passing glance either. Given the fact that this massive billboard was located in plain view of at least 1,000,000 people per day, I reached the conclusion that it’s message was deemed acceptable by the general population.


19 PEOPLE UNDER ONE ROOF

In many of the countries I’ve been to – both undeveloped and developed – the focus on family is so strong that it is quite common to find multiple generations living together in the same house. I have friends in Europe, Asia and Central America who still eat every single meal with their parents, siblings, aunts, uncles and cousins, even though they are now well over 30-years old. Many of these same friends also still live with their parents or in the same cluster of houses where their entire extended family dwells.

I will also never forget the family I met on the Indonesian island of Sumatra who invited me to spend a few days in their three-room home, which turned out to be inhabited by 19 family members (and four dogs)! And I was amazed, as far from the usual squabbles and frustrations often associated with large family gatherings back home, this turned out to be one of the most loving, welcoming households I have ever witnessed.

To these people, family plays a much larger role in their lives than it does for many people in the US or a handful of other first-world countries. When my friends in Thailand, Costa Rica, Italy and India think of family, they think of living together, eating together, socializing together and sometimes even working together.

And I’m not just talking about families who live together out of necessity, due to extreme poverty or a lack of resources. The families that I’ve met, across all levels of wealth, actually want to live together and spend so much time together!

From what I’ve seen, this isn’t such a bad idea at all. The resulting closeness appears to manifest itself into an environment of increased trust, support, emotional bonding and strengthened family morals. I’ve also clearly noticed a greater degree of genuine happiness among such tight-knit extended families, regardless of their living conditions.

OH NO! NOT ANOTHER FAMILY OUTING!

That whole idea that families are burdens and that we should move as far away from them as possible as soon as we’re able to survive on our own, is something that I no longer agree with.

Of course, I’m not saying we should all pack our bags and move back in with our parents, inviting our grandparents, cousins, Uncle Harvey and Aunt Marilyn to join us along the way, just so that we can all sit in a circle on the living room floor every day to eat our noon-time meal.

But, on the other hand, do we really need to have the idea that we should visit our parents less frequently than many of us already do, implanted deep into our minds? I do know that the billboard was intended as a joke (don’t worry, I do have a sense of humor!), but even jokes can have an affect on society. And to answer your question, yes, I did just see the film Inception.

When we think of our parents or our families, we should be excited about any opportunity to eat a meal together, to converse with each other and share our lives. Unfortunately, distance and time often begin to chip away at whatever level of closeness we began with. As a result, when we finally do have the entire family sitting around the dining room table for the first time in two years, it becomes quite difficult to re-connect. So we end up arguing over why we never told our parents about being laid off from work or even worse, arguing about who’s going to drive to the supermarket to buy the cheesecake that Cousin Laura forgot to bring.

That’s why the above billboard didn’t sit well with me. I would have much rather seen its opposite – “Storing With Your Parents Means Having To Visit, SO STORE IT WITH YOUR PARENTS!” – displayed for every New Yorker to see. Granted, this would put their storage facility out of business quite quickly, but think of all the close-knit families it would be responsible for creating!

Before I end this post and more importantly, before my mom calls to ask me whether or not I think my own family is close-knit, let me quickly state that wonderfully close families are of course possible without having everyone live under the same roof! In fact, I do have a wonderfully close family myself (among certain members at least) and despite spending most of my time overseas, I somehow end up seeing my family as often or even more often than many people I know who live permanently in the US.

After all, I do proudly store my two boxes of worldly possessions in a closet at my mom’s house, so take that “Manhattan Mini-Storage”!

How often do you see your family? Has distance or time apart had an effect on how close you are with them?