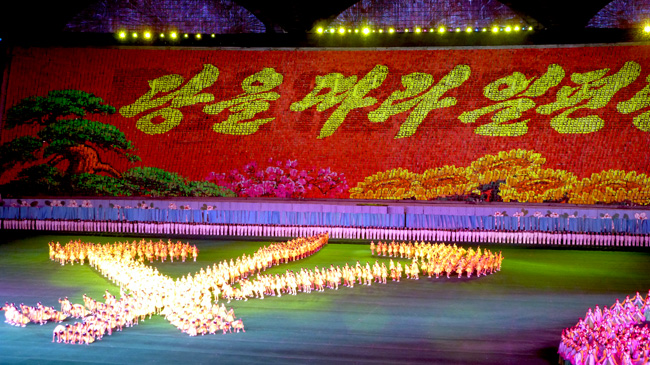 On the second night of the trip, our group had the opportunity to witness the Mass Games in Pyongyang, North Korea. In fact, when I had signed up for the trip to North Korea, one of the main reasons I chose these particular dates and this particular itinerary was because it did indeed include this experience.

The Mass Games is a synchronized spectacle of gymnastics, acrobatics, dance, drama, music and special effects that has been held every year since 2002 in North Korea, between the months of August and October, as part of the annual Arirang Festival. It involves over 100,000 participants (yes, 100,000!), some as young as five or six years old, who practice for months leading up to the event. The performance lasts for 90 minutes and takes place inside of the May Day Stadium in Pyongyang, which is the only stadium where the Mass Games are held in this country and it also happens to be the largest capacity stadium in the world.

The focus of the event is on the story of North Korea, with a perfectly, and unsurprisingly, fine-tuned message that highlights the North Korean race’s superiority and their triumphant victory in the Korean War, while praising the national party, their leaders and the country’s founding principles throughout. There are acts that also focus on North Korea’s friendship with China and Russia as well as dramatic scenes that portray the folk story of Arirang, in which a young couple in love is separated from each other due to the actions of their landlord, naturally representing the division on the Korean peninsula (the couple) and the perceived outside interference of the USA (landlord).

What was taking place on the field during these 90 minutes was simply surreal, with not a single performance involving less than several thousand people it seemed. From our vantage point, the performance was absolutely flawless and these were not simple routines. They were complex, difficult and often involved such feats that few of us would ever attempt (let’s just say that there were a lot of people flying through the air).

However, perhaps the most interesting portion of the Mass Games is what takes place at the back of the stadium, directly opposite from those in attendance. This is where 20,000 students between the ages of 15-16 sit as they play an integral part of the show. Each of these students has a book with dozens and dozens of pages, each page with a different color or pattern displayed on it. Throughout the 90 minutes, these students constantly, and simultaneously, change the pages of their book while holding them in front of their faces. This creates massive mosaic ‘pictures’ that stretch along the entire back of the stadium that change according to the part of the story being told on the field below. 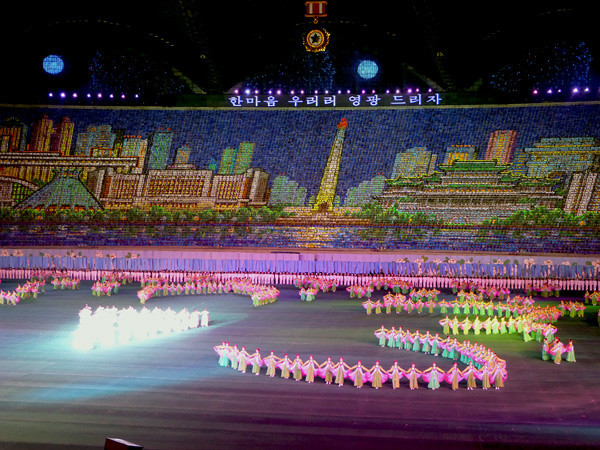 I must say, though, that I’m not sure if watching these disciplined students create these images (or even watching the performances on the field), working together in incredible unison, is unbelievably impressive or unbelievably frightening. While being chosen to participate as one of these students is apparently a great honor for the individual and their family, the training required is reportedly extremely intense. From what I was told, the group spends three months practicing every day for five hours after school and then they practice another three months during the summer, every day, all day, until the Mass Games officially begin. And the conditions/treatment to which they are supposedly subjected to in order to ensure they perfect their routines have also been labeled controversial. It’s certainly not surprising when you actually observe the perfection that is achieved. Imagine trying to convince 100,000 of your own countrymen and countrywomen to participate in such an event, and to undertake the months of practice required, all without getting paid, strictly for the love of the nation?

The night we attended the Mass Games, there were thousands of North Koreans around us, including dozens of highly decorated members of the military, as well as a hundred or so foreigners. And I had no idea what I would witness when I took my seat and waited for the spectacle to begin. When the stadium eventually went dark and the first note of music was blasted through the speakers, and the first mosaic picture was created by those 20,000 students, I leaned forward in my chair, turned on my camera and opened my eyes wide…

Here’s a few short videos and some photos of what I saw: 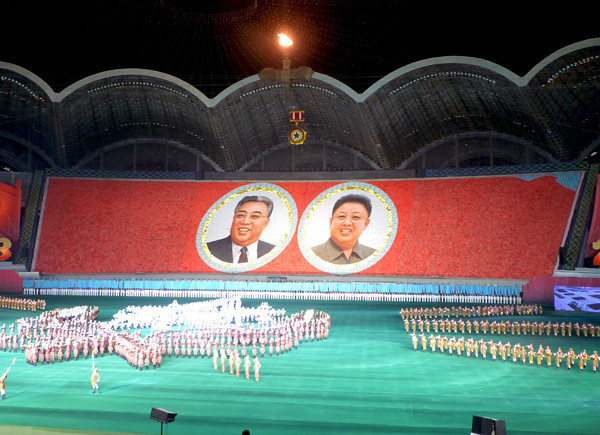 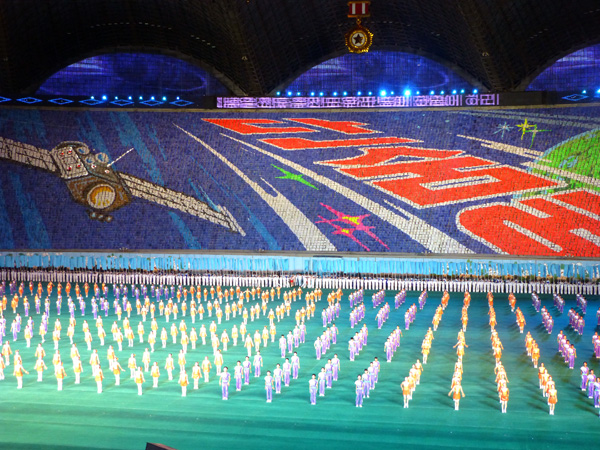 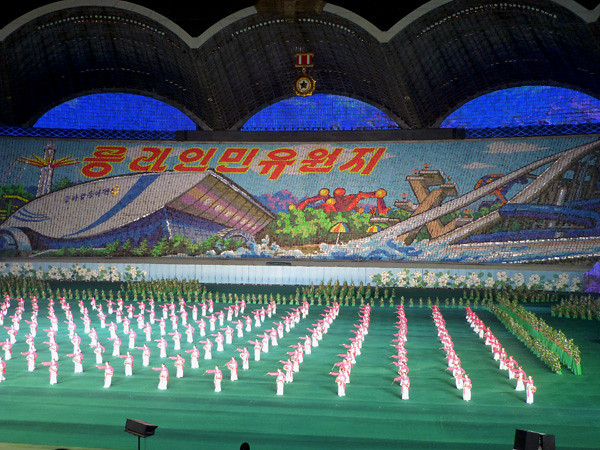 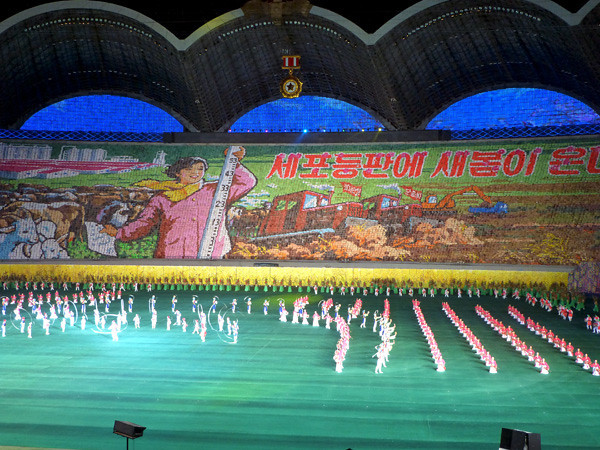 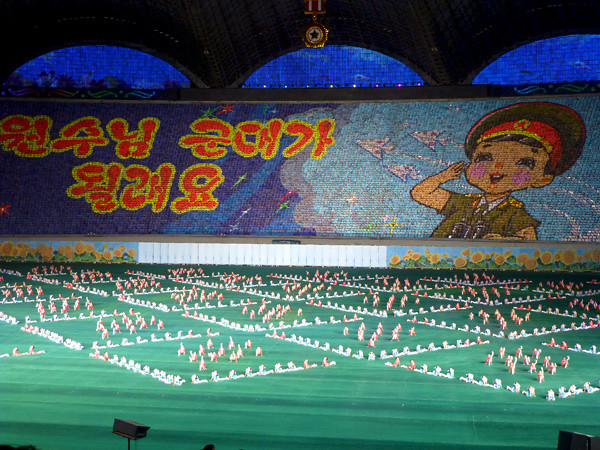 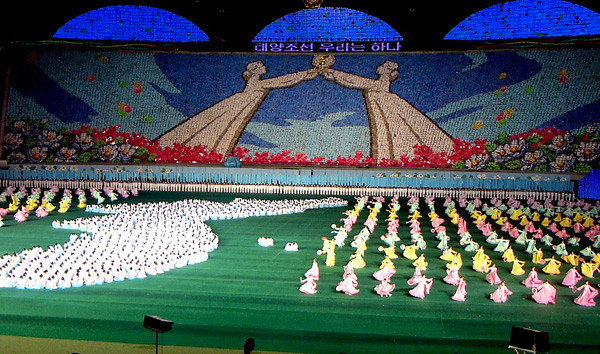 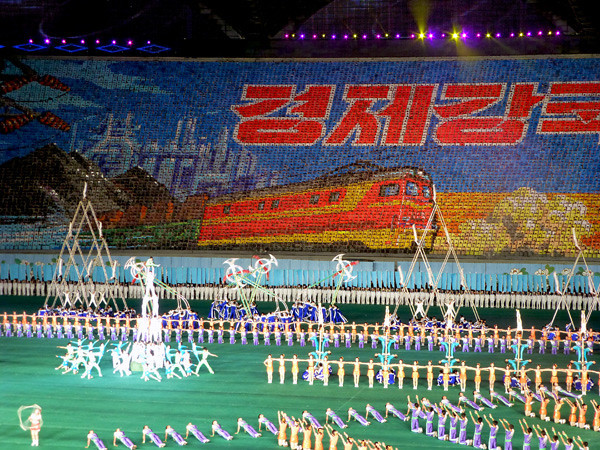 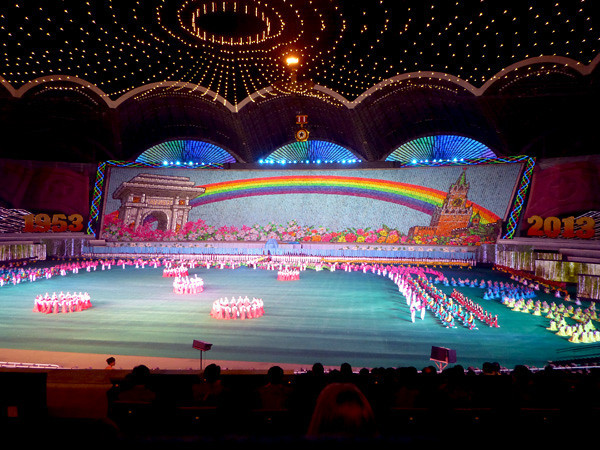 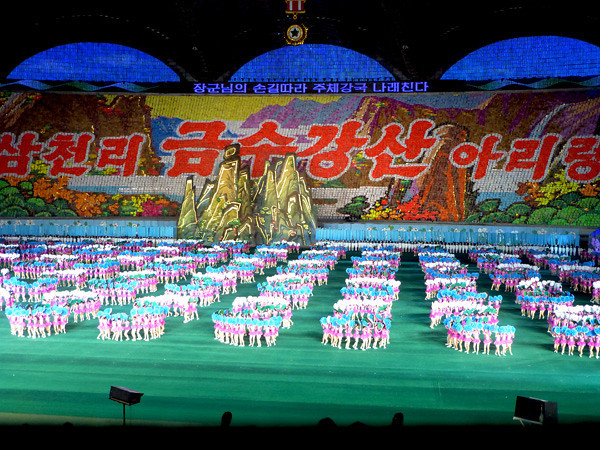 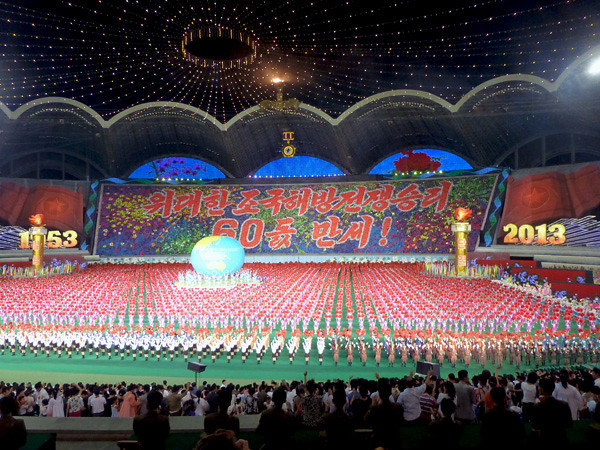 And that’s a sample of the 2013 Mass Games in Pyongyang, North Korea.

On a different note, some people have written to ask me how on earth I managed to go to North Korea in the first place. So I just wanted to say that just about anyone is welcome to visit this country but you do have to go as part of an organized group through an agency that specializes in North Korea tours. The agency takes care of your visa and it’s much, much easier than most would imagine. I went with Koryo Tours, who did cover the cost of my trip, which I briefly wrote about at the end of my previous post about North Korea.

What do you think of the Mass Games?