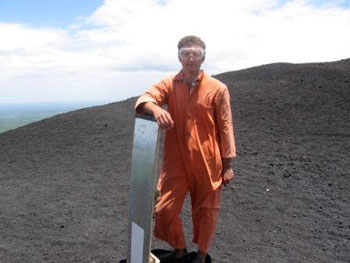 If you want an adrenaline rush that involves moving at 50 mph, eating rocks and slashing open several parts of your body, the perfect sport has finally arrived. It’s called volcano boarding and there is also only one place in the world where you can do it – Cerro Negro, an active volcano near the town of Leon, Nicaragua.

This ‘sport’ involves hiking up to the top of a volcano, sitting on a tiny wooden board and then sliding down the steaming mountain to the bottom. Now, this isn’t your normal sledding experience. This isn’t the small hill behind the elementary school. There is no snow. Nor is there any dirt or sand for that matter. You must sled over rough, razor-sharp volcanic rocks ranging in size from golf balls to genetically-engineered grapefruits.

Here’s how it went for me. I was the last of our group to sled down the volcano. Wearing a bright orange safety suit and flimsy goggles, everything started off quite innocently. I pushed off from the starting point, slowly glided along and marveled at the dozens of volcanoes off in the distance. Unfortunately, this period of thorough enjoyment lasted for approximately 7 seconds, right until I realized that I was flying uncontrollably down an active volcano at speeds usually reserved for fighter planes.

At the bottom of the volcano, the tour guide was clocking our speeds with a radar gun. So, as soon as I realized that there was no stopping me, I set my sights on breaking the record of 50 mph.

I honestly could not believe how fast I was going. Black volcanic rock started smashing against my face, dozens of tasty pieces entered my mouth and I could barely hold on as I zoomed along. I couldn’t see a damn thing either and I kept almost losing my balance. But somehow, everything still seemed to be under control…until I said to myself “I am definitely going to crash”. Seconds later I hit a small bump and crashed.

I was about halfway down the volcano when I wiped out. The small bump caused me to fly into the air, flip over, smash against the rocks and accept the fact that death was upon me. My momentum then caused me to roll wildly over and over and over along the painful surface for about 200 feet. When I finally stopped rolling, I just laid there with my face buried in the volcanic rock, finding it slightly absurd that I had actually survived.

My arms and legs were spread out and bent and I could feel blood pouring out of my left hand. But the most unfortunate part was that I still had to get down the second half of the volcano. I had no choice. And so I slowly crawled back to my sled and despite the pain, started to slide down once more.

I attempted to slide very slowly this time but I failed miserably and soon found myself flying down at top speed and enjoying another meal of volcanic rocks. And quite predictably, I crashed once again, just as I was about to reach the end. In an all too familiar scene, I flipped over, tumbled and violently skid along the rocks until I finally landed at the bottom.

For a few minutes I sat there stuck knee deep in volcanic rock as the rest of the group began to pack up and walk towards our awaiting vehicles. I wanted to cry and laugh and scream but the pain didn’t allow me to do anything but sit quiet and still and wonder why I had paid $23 to do such a stupid thing.

Blood dripped from my arms, my legs and my hands and my skin was scraped off in more places than I would have preferred.  It was just plain nasty and the injuries reduced my walking speed to that of a turtle without legs. 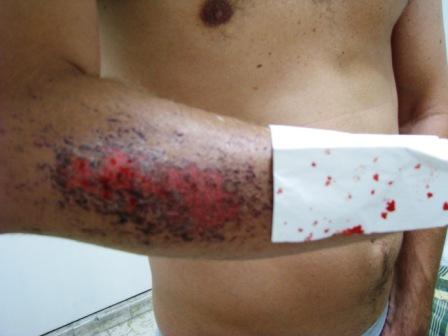 Once back at the guesthouse in Leon, I spent 30 minutes in the shower scratching the thousands of tiny volcanic rock fragments out of the open wounds on my body. And trust me, that hurt so much more than it even sounds. I then pasted my body with Neosporin and wrapped myself up in 18 miles worth of gauze.

That night, as my friend Mike (who somehow managed to suffer fewer injuries despite wiping out in a considerably impressive manner as well) & I had a few drinks, we ran into the tour guide from earlier in the day. As if sensing my need for even an iota of solace, the guide informed us that we had both been on target to break the speed record before we had each wiped out. He even consulted his log book of recorded speeds in order to prove he wasn’t just trying to put a smile on a wounded man’s face.

Regardless, this wounded man was instantly beaming with joy as all the intense pain and suffering vanished into the sweet Nicaraguan air. But, as one might expect, this glorious feeling of accomplishment lasted only for a few fragile minutes, as I suddenly noticed blood seeping through the gauze on my right arm and my left leg went completely numb.

It’s been over four weeks now and the scars are still visible. But I must say, despite the injuries, I would highly recommend volcano boarding to anyone passing through Nicaragua. So if you’re ever there, head over to the Bigfoot Hostel (the main tour operator that offers these trips) in Leon and sign yourself up…