Visiting The Directorate of Residence In Kurdistan

Visiting The Directorate of Residence In Kurdistan

There is some confusion as to whether or not travelers to Iraqi Kurdistan are required to visit the Directorate of Residence during their stay in order to validate their visa. After all, the visa stamp that one receives upon entering the country does clearly state, in both Arabic and English, “Visit The Directorate Of Residence Within 10 Days”. And in my case, the immigration officer who placed that stamp into my passport repeated twice the need for me to visit the Directorate.

However, other travelers, such as Anil of FoxNomad.com, were not given these instructions upon entering the country and despite choosing not to visit the Directorate, had no issues whatsoever upon exiting the country at the end of their stay.

As for me, on my second day in the regional capital of Erbil, I decided to take a taxi to the Directorate of Residence just to be safe. And the following, like some of my other Iraq posts, is not only a tale of what I discovered, but perhaps a useful guide for anyone else who finds themselves in the same situation.

Note: None of the photos have anything to do with the Directorate of Residence but as you’ll see, I was not allowed to take any photos outside of or within the complex.

Step 1: “No Guns or Phones Allowed”

I enter the Directorate complex through an unmarked gate off of a small lane. Immediately upon entering, I am asked to hand over my mobile phone, camera and any other electronic devices at a check-in counter, which I do, while pretending not to be alarmed by the fact that everyone else around me is handing over their fully-loaded handguns.

Proceeding through a thorough pat down, I reach a small courtyard filled with dozens of people – Kurds, Iraqis, Iranians, Turkish and Syrians – all trying to obtain various visas. Without any signs to guide me, I hop from building to building until I find someone who can point me in the right direction.

The next step involves two small tin shacks at the back right corner of the courtyard (see map above). The man inside the shack on the left makes 2 photocopies of my passport and visa (250 Iraqi Dinars per copy) and the man inside the shack on the right then fills out several forms, which he hands over to me after I ‘pay’ him 500 Iraqi Dinars for filling out the forms.

The form filling man directs me into the main building where I am told to search for “Room #3”. The building has four floors and the room numbers are in no order whatsoever, which is actually quite irrelevant considering that “Room #3” does not have its number on the door at all. After several sets of bad directions from employees of the Directorate, I find “Room #3”, located on the first floor with a sign on the door that reads “Control Room”.

The door to the office is closed, but I quickly learn that it is acceptable practice to just barge right in. I hand my passport and paperwork to a man at a tiny desk who hands my paperwork over to the more official man sitting to his right. Among other questions, this man asks me how long I want to stay in Iraqi Kurdistan.

My original stamp is valid for 10 days and so I ask for an additional 10 day extension, to which the man asks to see a letter from my employer in Iraq. After explaining that I am merely a tourist, he refuses my extension, however, after some persistence on my part, he eventually writes a short note on a scrap of paper and sends me off to his ‘boss office’. The friendly boss immediately approves my extension, although, while shaking his hand in appreciation, he tells me that I need approval from the ‘big boss’ first. The ‘big boss’ flat out refuses the extension and immediately sends me back to “Room #3”.

Back in the Control Room, defeated and increasingly confused, the man scribbles something onto my forms in Arabic and tells me to visit “Room #15”. 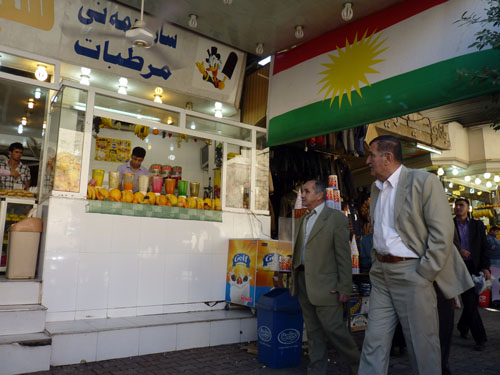 It turns out that “Room #15” is located in the basement. I approach the small window next to the door, hand over my passport and paperwork again and take a seat on the floor of the overcrowded waiting hall.

After 45 minutes, a man calls my name and I enter “Room #15”, where my photograph is taken and an officer asks me the same questions as the man upstairs (Where are you from? Why are you here? What is your profession? What is your father’s name? What is your mother’s name?). The officer then gives me my passport and directs me to “Window #7”, located at the other end of the room.

At “Window #7”, a female soldier asks me the exact same five questions, enters some information into her computer and then places an orange circular sticker on the front of my passport.

Oh my. “Room #11” is no ordinary room. Nobody is allowed to enter “Room #11” and instead, one must join the massive crowd of people pushing and shoving their way towards the small window next to the door. This step, while a vital part of the process, is not for everyone, as I am forced to stick up my elbows, jab endless people in the ribs and step on some feet with a considerable amount of force.

Upon finally reaching the window, a man grabs my passport and paperwork and without a word, disappears into the room.

IMPORTANT TIP: Once your passport is taken, DO NOT give up your prime position near the front of the crowd. I made the amateur move of backing away from the window and the result was most unfortunate. If you move away from the crowd, you won’t hear your name being called when your passport is ready. I waited for one hour against a wall at the opposite end of the hallway and only when I decided to fight my way to the front of the crowd again, did I discover that the man had been calling my name for over thirty minutes. And inexplicably, because I didn’t pick up my passport when called, I had to return to “Room #15” and have my orange sticker replaced with a new one. 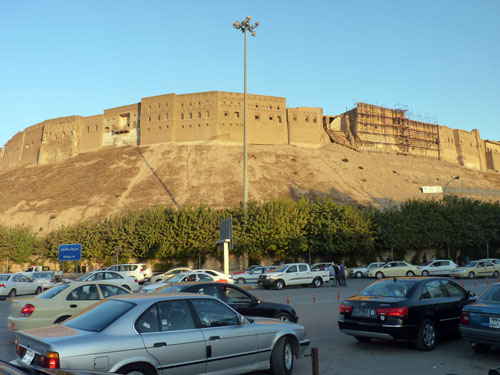 I am told to return to the first floor and visit “Room #18”, another room that does not have its number on the outside of the door. “Room #18” is better known as the “Passport Fees & Fines” office.

The young man in the doorway does not allow me to enter but takes my passport from me. I peek into the office and notice that he places my passport at the end of a long line of at least 100 passports that snakes across two huge desks and eventually ends in front of a man sitting at a computer, who is spending more time drinking tea, eating pastries and talking on his mobile phone than working.

IMPORTANT TIP: If you’re in a rush or simply can’t stand this process any longer, don’t wander too far from the doorway no matter how many times a man comes out of the office and yells at everyone to stop crowding around the doorway.

I camp out by the door for thirty minutes before I finally put on my sad face, which I hope will convince the man in the doorway to bump my passport up a few places. I also point to my non-existent wristwatch and try to explain that I need to be at the airport soon. (This isn’t a lie as Anil was flying into Erbil that day and I planned to meet him at the airport.)

At first, the man ignores me and so I pull out 2000 Iraqi Dinars ($1.65 USD) from my pocket and wait for the right opportunity to slip him a bribe. But before I can hand over the money, I notice that he has just moved my passport to the front of the line.

I watch the man behind the desk talk some more on his mobile phone while typing in my passport information with one finger. He then slides my passport onto another desk, where another man sits in a chair, talking on his mobile phone of course. After ten minutes, I am called inside where I receive a hand-written ‘bill’ that I am instructed to take to the “Bank Counter”.

Surprisingly, the “Bank Counter” is conveniently located right next door to the “Passport Fees & Fines” office. I pay the 2250 Iraqi Dinar ($1.90 USD) fee and take the official receipt back to “Room #18”.

I exchange the receipt for my passport and despite the pain from having banged my head on a sharp metal bar sticking out of the wall in the process, I nearly fall to my knees in happiness that the process has finally come to an end.

Unfortunately, at the exact same moment, the man behind the desk informs me that I must now pay another visit to “Room #11”. 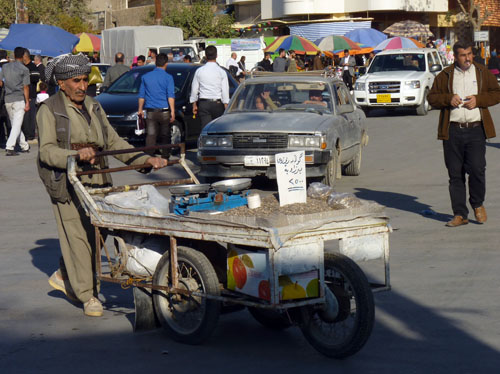 Back downstairs I go to the once chaotic “Room #11”, which is now almost completely empty. A guard at the door directs me to a desk inside where a man types some more information into a computer, asks me the same five questions and hands my passport to a woman next to him. She places a large stamp in my passport, right under the stamp I had received at the border, and then hands it over to yet another man.

This man flips through the pages of my passport for a few minutes, drinks a cup of tea, looks for something in a large stack of papers on his desk and eventually, grabs a black pen and enters the expiration date of my visa onto the new stamp.

With my passport in hand once again, I ask the man where I need to be next.

Without even looking up he mutters, “Finish. You go.”

And so, almost 4 hours after I walked into the Directorate of Residence in Erbil, I pick up my mobile phone and camera from the security desk and stroll back into the world outside, without having received the visa extension I wanted and completely unsure of why I had to go through this process in the first place.

So while this post may not provide the answer as to whether or not you need to visit the Directorate of Residence during your stay in Iraqi Kurdistan, if you do find yourself in the midst of this obstacle course, you should now be able to navigate the process with ease.