You Should Visit Riga, Latvia…It’s Quite Pleasant

You Should Visit Riga, Latvia…It’s Quite Pleasant

Only one word enters my head when I think of the time I just spent in Riga, Latvia. And that word is ‘pleasant’. I’ve tried, but that’s the only word I can use to describe it, so much so that originally, this post was just going to say “Riga is pleasant” and nothing more.

Of course, my inability to describe this Baltic city more thoroughly might have something to do with the fact that I only spent an embarrassingly short two nights and two and a half days in Riga. More time is obviously needed in order to get a proper feel for a particular destination.

But alas, I shall write about the experiences I did have in those short 60 hours, simple experiences that once again, led me to reach the profound conclusion that Riga, Latvia is….pleasant.

To The Old Town We Go…

During my first full day in the city, I walked out of my hotel (Hanza Hotel – highly recommended 3-star hotel that can be as little as $20 per person!) and headed west along Pragas Iela, which led me straight into the medium-sized Central Tirgus (Central Market). As one would expect from pretty much any market on the planet, the stalls were full of fruits, vegetables, clothing, meat, fish and baked goods. I bought two peaches, enjoyed the pleasant aroma of freshly baked pastries and then moved on, pushing my way through a crowd gathered around two medics trying to lift up what appeared to be a very inebriated homeless man lying in the middle of the road.

After crossing over the Daugava River and passing the International Bus Terminal, I popped down into an underground passageway and then, after choosing the wrong exit the first time around, finally popped back up on the other side of the intersection, right on the edge of the Old Town. 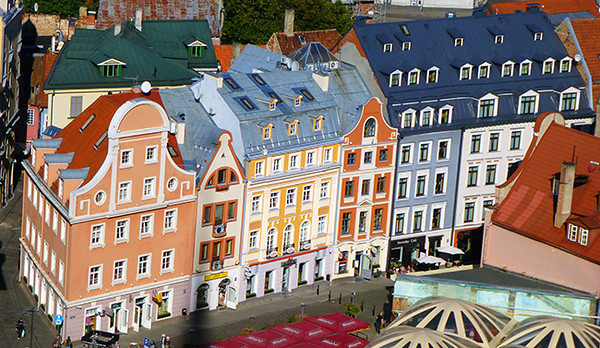 A few steps later and I was standing among the colorful collection of restored historical buildings, which happens to contain the largest collection of German Art Nouveau architecture on the planet, a fact that, when read carefully, is quite a pleasant fact indeed. (Riga had a large German population until the Nazis arrived and sent them back to Germany.)

So the first thing I did once in the Old Town was to trip on the rough cobblestone street, not once and not twice, but three times in a span of about thirty seconds, simply because I was looking up at the buildings and not watching where I put my feet.

Once that bout of clumsiness was over and I figured out how to walk again, I proceeded to spend several hours in this part of the city, just walking, turning left and turning right, choosing random streets and lanes and just seeing where it would all lead me.

I came upon the St. Peter’s Cathedral, where I took the elevator up to the observation deck for some mighty pleasant views of the city, and I found Town Square, Cathedral Square and the Riga Castle. I went into the Museum of the Occupation of Latvia and the House of Blackheads and I visited the Swedish Gate and The Three Brothers, the oldest homes in Riga. For three and a half hours I roamed. 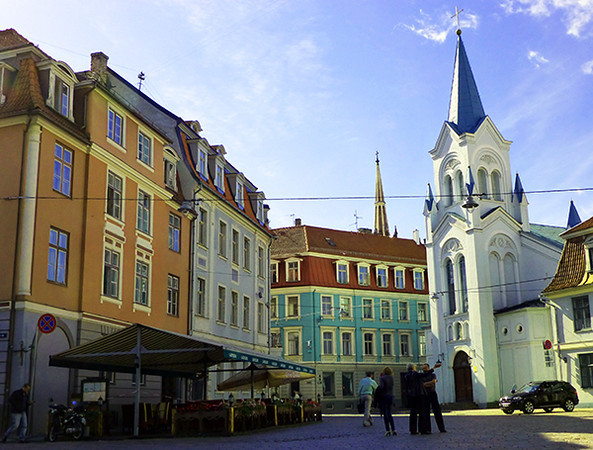 Not having a map was a great idea as getting lost in the Old Town is probably the best thing a traveler can do. It’s probably the only way to find such places as the Ligitas Gardumi cafe, located down a tiny lane (as wide as my wingspan) that appeared to be completely empty and uninteresting. But when I entered the door of the cafe, I was greeted by a cozy place in a most pleasant setting, where I ate the most pleasant mushroom quiche I have ever eaten.

After this midday quiche break, I continued my wandering, walking along the northern edge of the Old Town, eventually coming across the Freedom Monument and its surrounding parks, right near the Powder Tower and the intersection where I sat down on a stoop without looking down first and ended up sitting in some fresh bird poop.

And that’s the moment when I decided to return to my hotel room for a rest.

Beyond the Old Town

In the evening, I ventured back outside again, fully intent on walking the 1.5 kilometers to the Lido Recreation Center, a complex in the opposite direction of the Old Town that houses one of Riga’s most popular restaurants, a restaurant that everyone I know who has any connection at all with Riga had recommended I visit. And since the restaurant is located on somewhat of a highway/major road, I figured that I would take the back streets to get there.

As you might imagine, taking the back streets is often a great option, however, I soon discovered that it is sometimes not such a great option if you don’t know the area and have never been on those back streets before. After walking for twenty minutes, I found myself in an unpleasant neighborhood, one with plenty of broken windows in the dilapidated Communist-era buildings, plenty of homeless men following me around and more than enough groups of rough-looking teenage boys drinking beer and staring at me.

Eventually, after trying to find a way out of this area, I ended up cornered by some tram tracks, a dark tunnel, a graffiti-filled wall and another suspicious group of teenagers, and I had no choice but to give up the idea of eating at the Lido Restaurant.

Oh well, so it goes. 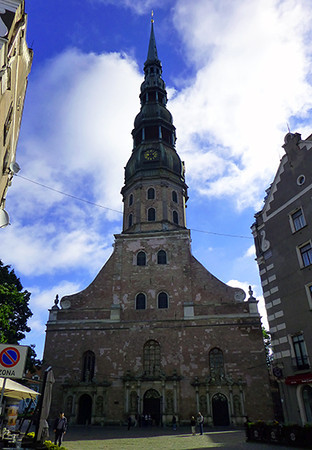 Turning around, I looked for the massive spire of St. Peter’s Cathedral far off in the distance and started walking towards it, never before so happy to be going to church. I didn’t actually make it to the Cathedral though as I decided to turn onto Krisjana Barona Street and visit the neighborhoods to the north of the Old Town instead.

And this proved to be a solid decision as I met two nice university students in one of the parks who offered to quickly show me around the Art Nouveau Quarter, a neighborhood along Elizabetes and Alberta Streets that is home to several interesting buildings created by an architect named Mikhail Eisenstein. The two students showed me the pleasant area, we chatted for a while and then they recommended a local restaurant where I could get a nice, sorry, pleasant, dinner.

That was it. After saying goodbye to my ‘tour guides’, I went to the restaurant they recommended and I sat down for a simple local meal. And as I sipped my beer, okay, my pleasant beer, waiting for my food to arrive, one thing was certain…

The city of Riga was pleasant once again.