My Travels to Dakhla, Western Sahara: Straight Into the Unknown

My Travels to Dakhla, Western Sahara: Straight Into the Unknown 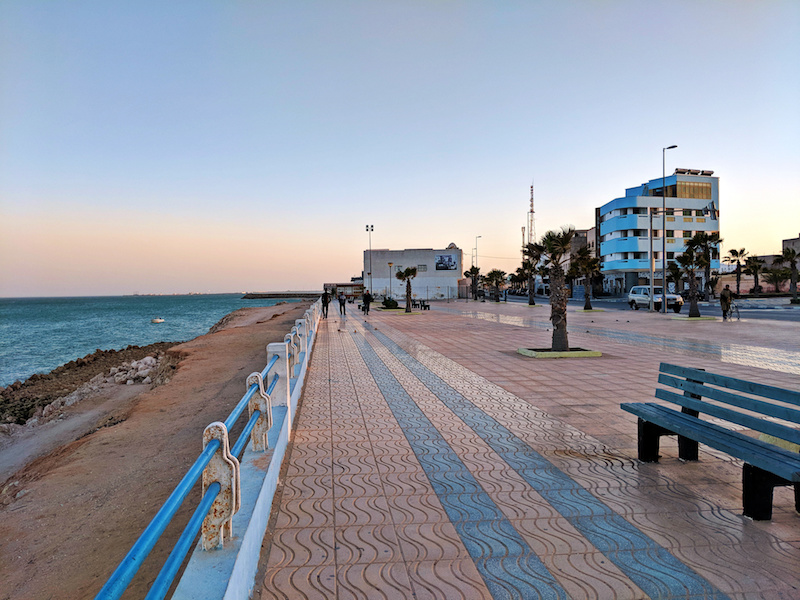 Imagine an eerily quiet town in North Africa, set at the edge of the Sahara Desert, right in the middle of an impossibly narrow peninsula that juts out into the Atlantic Ocean. Imagine a harsh and constant 40 kmh wind blowing into your face, with sand flying around, caught up in the gusts, and going straight into your eyes and mouth.

Looking around, you find empty intersections and very few vehicles on the streets, and you quickly notice that there’s barely any people walking around either. When someone does glide by in the distance, in their traditional hooded robe or cloth covered face to protect themselves from the elements, you wonder where the other people could possibly be.

Imagine a town with seemingly little connection to the outside world, as if it were located on an entirely different planet altogether.

Why Would I Travel to Dakhla?

The reason I decided to travel to Dakhla, Western Sahara (or Moroccan Sahara depending on who you talk to) was a random one. I was in Casablanca, Morocco and I had 8 days before I needed to be in London to meet up with my girlfriend. I searched for flights to all kinds of cities and suddenly, I saw Dakhla on the map. It was a relatively short distance away by plane, the fare was quite inexpensive and I knew absolutely nothing about the place.

It seemed like the perfect destination and I booked my ticket.

My Intro to Dakhla

On my first afternoon in Dakhla, I found myself sitting on a bench in the middle of an empty, yet brand new, concrete boardwalk along the water. I zipped up my windbreaker and stared out in front of me, across the Dakhla Bay, with the faintest view of the mainland far away in the background.

After 10 minutes, a man walked by, we nodded, and he sat down at another bench. The wind pounded my head. I sat in disbelief at how little activity was around me. Where were the people? What was I supposed to do here?

And I started to wonder if my decision to travel to Dakhla was a good one.

Time passed, the wind howled, the sun began to set. And before long, perhaps as the sky turned from blue to bright pink, I began to perk up.

A Trip Into the Unknown

I don’t know what triggered it exactly but I soon made an important realization that would change my perspective.

It’s actually quite exhilarating to not know. There’s something special about having no clue whatsoever about where you are and what there is to do. If I was going to make the most of my time in Dakhla, I needed to find the people, I needed to bust out some horrendous French and try to communicate, I needed to start asking questions and creating my experience.

What I really needed was to go back in time 15 years, to those days when we didn’t have access to all kinds of information and had no choice but to show up in a new city without knowing what to expect. Sure, I could have looked up some information about Dakhla and its surroundings but I didn’t really have time and there really isn’t that much information out there anyway.

Prior to my trip, all I had done was book a room.

And so it went. I transported myself back to the good old days.

I asked the guesthouse owner for recommendations. I talked to the woman in the bakery and the man at the travel agency that I had mistaken for a tourism office. I tried my best to communicate, in my horrendous French and so-so Spanish, with the waiter at the small local restaurant and with the man selling fruit on the side of the road.

And in the end…I got nothing. Nada. Rien du tout.

Turns out, there really isn’t much to do when you travel to Dakhla. As my guesthouse owner bluntly put it, “there’s nothing going on here at all.”

There’s a lighthouse (that was closed), a market (that was quite empty) and a main square that was as desolate as could be. The beach in town was all torn up and under some kind of construction. There were tea shops but they were almost all without any tea drinkers.

The experience was raw, and fascinating in its own way. It was an old school trip straight into the unknown.

Is Dakhla Worth a Visit?

By Day 3, I had a routine. I woke up in my comfy room at the Guesthouse Dar Rio Or and went upstairs to the owner’s apartment. Here they served me a large breakfast of coffee, eggs and several kinds of bread, which I ate on my own of course as I was naturally the only guest. Two hours of work on the little balcony off my room. Three hours of roaming around town, an afternoon rest and an evening wander along the water, with a simple dinner at one of the simple eateries.

On paper, and based on my description above, it would seem that there is little reason to travel to Dakhla.

But on the other hand…

…when’s the last time you’ve been in a city and you were the only traveler there? How often can we visit a place that is completely without tourism infrastructure or tourism influence and is as real as it gets?

Dakhla is eerily quiet. The wind really does hurt. You’ll inhale a good amount of sand, too. You’ll spend a lot of time sitting on benches, sipping tea and pondering life, not because you’re in the middle of a spiritual awakening but because, again, there is nothing else to do.

However, when a local sits next to you on the bench, when the baker smiles, when the shoesmith offers to show you how he makes his shoes…when the kids kick you the football, when the taxi driver doesn’t want to drop you off because he can’t believe a foreigner is in his taxi, when nobody tries to rip you off…when a market seller realizes you’re not from these parts and you share a laugh after they tried to sell you a live chicken, when you stare out at the Bahia de Dakhla and your mind drifts into a state of pure peace and quiet…

To be outside the normal influences of tourism was invigorating, challenging and rare. And as a result, such an experience can only be positive.

Planning a Trip to Dakhla?

Here’s my Quick Guide to Dakhla post where I talk about entry/visas, safety, accommodation, where to eat, what to do and more.

If you plan to travel to Dakhla and have any questions, just let me know!