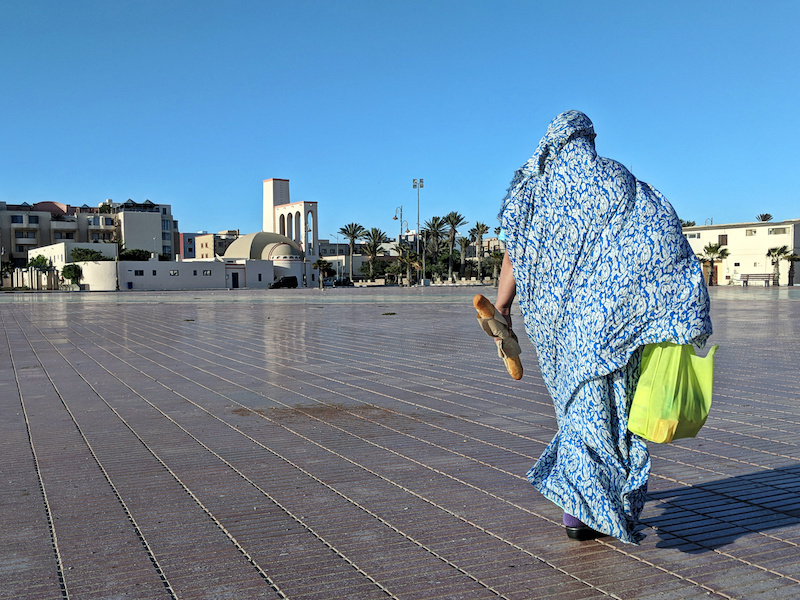 Western Sahara is a disputed region in North Africa and is not a recognized country. About 80% of the territory is controlled by Morocco and 20% makes up the Sahrawi Arab Democratic Republic. There is a sand wall that separates the two regions.

From what I’ve gathered, after the Spanish gave up control of this entire territory in 1975, Morocco and Mauritania shared control, with the native Sahrawi people lacking the power needed to take over their claimed homeland. Eventually, amidst fighting, Mauritania moved out of the region and Morocco reinforced its presence. Western Sahara has been a disputed territory ever since, with most of the Sahrawi people living in and operating from refugee camps in Western Algeria.

Dakhla is under Moroccan control, with Moroccan military checkpoints throughout the area and Moroccan government buildings and flags clearly displaying their presence. However, Morocco’s sovereignty over the territory has yet to be recognized by the international community.

Like many places, the history and current situation is complicated.

Most people arrive via flight from either Casablanca or Agadir or overland from Morocco or Mauritania. Entry requirements are the same as Morocco given its control over Dakhla and 80% of Western Sahara. As a result, you do not need a visa if you have a passport from the UK, EU, USA, Canada, Australia or New Zealand and you can stay in the region for 90 days. Other nationalities should check for the latest information as you might need to apply in advance for a visa.

The very small airport is actually in the center of town. It’s about a 3 minute drive to any hotel. When you arrive you will go through a quick immigration check and then be on your way. Taxis and drivers are waiting outside the one exit and are easy to find. Overall, arriving and departing at the airport is very simple as there are only a couple of flights per day, either to Casablanca, Agadir or Las Palmas, Gran Canaria.

You can also arrive via land from the north (Morocco) or the south (Mauritania). I did not cross the land borders but from what I’ve heard, it’s a standard immigration check to enter the region.

In Dakhla, the currency used is Moroccan dirhams. There are several ATMs in town and a few money exchange offices as well. There are also two ATMs at the airport in the arrivals hall. Most restaurants and smaller businesses will not accept credit cards so cash is important to have.

Languages spoken in Western Sahara include Hassaniya Arabic, Moroccan Arabic, Spanish and French. In Dakhla itself, there wasn’t much Spanish spoken, mostly Arabic and French. Very little English is spoken but people are friendly and will certainly do their best to communicate.

Western Sahara is a disputed territory and as a result, there is always the possibility of conflict and political demonstrations. You should check for the latest information on safety, via local and government websites, to assess any potential danger. With that said, Morocco’s heavy military presence in Dakhla itself does keep things relatively quiet. From what I was told by those I met in the region, Dakhla is quite safe in terms of regular crime.

The main thing to watch out for is dehydration and a constant dry and dusty wind during the spring and winter that can really take its toll on you.

Guesthouse Dar Rio Oro – There aren’t many decent sleeping options in Dakhla but this one was as solid as the reviews stated. Good sized rooms in a cozy building across the street from the water, centrally located and with a friendly Arabic, French and Spanish-speaking owner who can assist with organizing a day trip into the desert. Rooms are approximately $40 USD per night, breakfast included. (Request a room with a private bathroom and this view!)

After walking around for 1 week, the only other accommodation that looked decent were the Hotel Albaraka ($100 USD per night) and Hotel Mansour ($80 USD per night), both in the center of town. However, I don’t see any reason to pay those prices when you can get the Dar Rio Oro for less than half.

*If you use this link to book accommodation, you’ll save up to $30 on your booking (and I’ll receive $20 as well): Booking.com discount

There’s a handful of restaurants in town and you can always head into one of the bakeries for a sandwich, pastry or quiche as well. The main market, while quiet, does have some stalls serving prepared food.

I ate most of my meals at the friendly Ikram’s. This small restaurant is in the exact center of town at the main traffic light and offers simple, inexpensive and tasty soups, wraps, grilled meats and fish and salads. A hearty meal costs about 50 dirhams ($5 USD). The place only has about 6 tables but seemed to be popular compared to other restaurants. Across the street is the decent Restaurant Bahia, again, with simple offerings that were, in my opinion, not as good as Ikram’s.

For proper restaurants, there is the Villa Dakhla, offering typical Moroccan dishes as well as international food at a premium price. The setting is great, right on the water and they do serve alcohol. Casa Luis serves up good Spanish-Moroccan cuisine and Chez N’Tifi, on the edge of the town center, is an excellent option for cheap, local fare. Casa Lola and Samarkand were also both recommended but I never tried them.

In the evenings, many tea shops open up in town, although most remain pretty empty. If you find one with patrons, it’s a good chance to enjoy some Moroccan tea while trying to interact with locals who will certainly be curious about you.

Dakhla is small! You can walk everywhere and anywhere in this town. You can even walk from the airport to the town center in about 18 minutes. If you want to visit the outskirts, which include the opposite coast, the lighthouse or the nearest beach, you might want to take a taxi.

Taxis are shared and you simply wave one down, although you might have to wait a while for one to actually pass. Then, just tell the driver your destination and get in. They’ll get you there eventually, probably picking up and dropping off another person or two along the way. At the end, you hand over 15 dirhams ($1.58 USD) and you’re good. If you’re taking a taxi to the Beach KM 25 or the popular windsurfing area, located about 20-25 minutes north of town, you’ll have to negotiate a price ahead of time.

In Dakhla itself, there isn’t much. Lighthouse, market and Oum Lbouer, the closest beach which is about 10 minutes drive out of town.

North of Dakhla, about 20 minutes, is Beach 25 (at KM 25 on the main road) on the edge of the Dakhla Lagoon. This spot marks the start of an area that is popular with those interested in windsurfing or kitesurfing. You can actually stay out here at one of the windsurfing camps, such as Ocean Vagabond, which offer bungalows and a restaurant/bar near the water (they range from budget to quite upscale). The main downside is that apart from the beach and windsurfing camps, there is nothing else around. If you’re really into windsurfing or kitesurfing, it’s perfect. If you’re just curious, it’s best to stay in Dakhla and spend an afternoon out here.

The desert and mainland coast! If you gain anything from this guide to Dakhla, it should be the need to hire a driver with a 4×4 vehicle and let them take you off the peninsula and show you the surrounding desert and the untouched coast. It’s some of the most inhospitable land on the planet but with that comes some of the most stunning and surreal landscapes I’ve ever seen in my 19 years of travel (it even rivals the unbelievable Socotra Island). We’re talking off-roading in the rough, barren Sahara, gorgeous white sand beaches without a soul around, 100 meter tall sand dunes rising out of the water, massive sweeping plains of soft pink sand and so much more.

I’ll be posting more about this in my next post, complete with videos and photos such as this one…

(The owner of Guesthouse Dar Rio Oro organized my driver. It was actually her neighbor, Sidi, a really kind guy that charged a reasonable $80 USD for a 10 hour adventure all over the mainland.)

Want to Know More About My Trip to Dakhla?

Check out my post Travel to Dakhla: Straight Into the Unknown for the complete story.

If you have any questions after reading this guide to Dakhla, just let me know!