How would you feel if you planned your dream trip to the Dominican Republic, flew to the Caribbean, spent ten incredible days on an island and only upon returning home, discovered that you had actually been on the island of Dominica?

Would it affect what had been a memorable experience?

Of course, I doubt that this scenario would really happen, at least not on such a large scale. But on a smaller scale, it certainly can occur during our travels.

On Sunday morning, for the first time since arriving in Australia at the end of December, I finally ventured beyond the city limits of Melbourne. In a rented, bright blue Nissan Micra, Liz and I drove west out of the city and towards the Great Ocean Road, a well-known coastal region of Victoria. Our eventual destination was the small beach town of Anglesea, where a friend of mine had reserved his brother’s beach house for a week so that six of us could enjoy a short beach break.

About an hour and a half outside of Melbourne, and after a sweet yet talkative elderly volunteer at a roadside information center spent thirty minutes explaining to us, in painstaking detail, every single activity and sight in the entire region when all we asked for was a map, we caught our first glimpse of the ocean as we pulled into the laid-back town of Torquay.

The town of Torquay is essentially a surfers hangout, where the main attraction is the beach, and more specifically, Bell’s Beach. Made famous by the 1991 classic surf film Point Break (the final scene was set at Bell’s Beach) and known for having the longest running surf competition in the world, this legendary location seemed the perfect place to begin our five-day adventure along the Great Ocean Road. 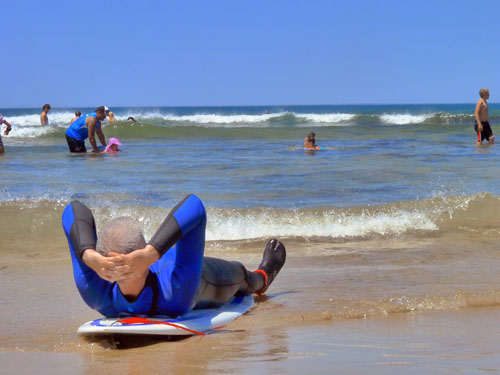 For days prior we had talked about visiting this beach, and given our interest in surfing from our days back in Mexico, we were genuinely excited to catch a glimpse of surfers riding such famous waves.

After picking up some food in the centre of town, I drove back onto the main road, confident that I would easily locate Bell’s Beach, which is, after all, the most well-known attraction in the area. And sure enough, five minutes later, I turned onto Bell Street and immediately found myself driving down a small road packed full of both cars and people heading towards the beach.

We had arrived. High-fives all around.

I parked the car, we grabbed our sarongs and food and we practically ran up the dirt path that led to the top of a small hill. At the top of that hill we stood in silence as we marveled at the impressive stretch of beach before us. We happily inhaled the refreshing ocean air and smiled widely at the golden sand and emerald waters. It was easy to understand how this location had become so famous.

Despite the crowds, we found a small empty patch of grass and sat down to eat our lunch, which included a vegetable and cheese roll that I proceeded to drop all over my shirt simply because I had difficultly concentrating on eating with such a remarkable beach in front of me.

To the left were hundreds of colorful people engaged in such activities as sunbathing, playing beach cricket or building sandcastles. In front of us were dozens of more people swimming and frolicking around in the ocean. And to the right were the surfers, approximately fifty or so brave individuals attempting to ride the waves of one of the world’s most holiest surf spots. 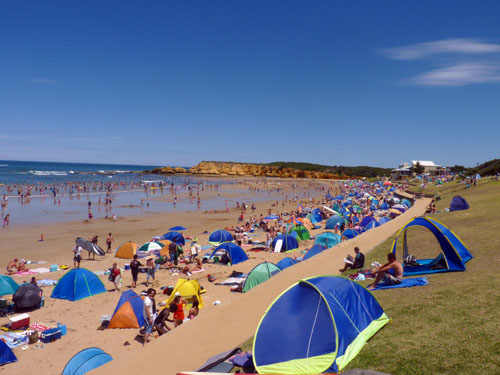 After our leisurely lunch, we walked down the hill and wandered along the beach for over an hour, while making several honest attempts to go for a swim. Of course, being used to the much warmer waters of Mexico, we only made it up to our toe nails before finding it too cold to proceed any further. But it still felt wonderful to be standing in the ocean at a place I had looked forward to visiting for quite some time.

Eventually, after sitting on the grass once again and watching the surfers ride their waves, we said goodbye to the beautiful Bell’s Beach and returned to our car, where we gave each other one more high-five in celebration of our successful two hour visit.

We then exited the car park and began the drive along the coastal road towards the town of Anglesea.

And then, less than a minute later, we passed a large sign that read, “Bell’s Beach – 500 meters ahead”.

It turns out that we had not been at Bell’s Beach after all. We had actually spent two hours at the far less famous Surf Beach instead. Bell’s Beach is located on Bell’s Beach Road, not on Bell Street.

Upon seeing that sign, we didn’t have time to do anything but shrug our shoulders, share a short laugh and carry on with our drive to Anglesea. We had friends to meet and were already running late.

But during the rest of the drive, I couldn’t help but wonder if we had enjoyed our visit to Surf Beach because it was actually a beautiful beach or if only because we thought it was the famous Bell’s Beach at the time?

The more I thought about it, the more I realized that Surf Beach basically looked like quite an ordinary beach, similar to hundreds I’ve seen before all over the world. And so, before long, I began to feel that my positive experience there was most likely a direct result of my expectations and not at all of what I had actually discovered.

Does this happen consistently during our travels? Do we sometimes appreciate a travel experience simply because we believe we are supposed to appreciate it? Even if we end up at the actual place we’re looking for, do our expectations blur our interpretation of reality?

In other words, is it possible to view the Taj Mahal as anything less than impressive?