The Simplest Hotel In The World

The Simplest Hotel In The World 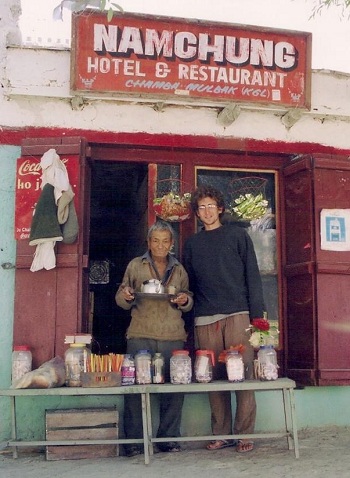 For some reason, this morning, just seconds after waking up, I started thinking about an elderly Indian man. But this was not just any elderly Indian man, he was the owner of a small hotel, the simplest hotel you’ve ever seen, in the tiny Ladakhi village of Mulbekh, located some three days north of Delhi by car or bus, and at an altitude of 3500 meters, way up in the heart of the Himalayas.

It’s embarrassing to admit but I don’t know this man’s name despite having spent two nights at his hotel some years ago. And while I certainly don’t remember the names of all the hotel and guesthouse owners I’ve met over the years, my stay at this particular hotel was a particularly memorable one…

When I hopped off the bus in Mulbekh, it did not take long at all for me to learn that this 5500-person village had only two accommodation options.

Glancing to my left, I noticed what appeared to be a brand new three-level hotel, conveniently situated across the street from the Chamba Statue, a 1300-year old Buddha image carved out of the rock face, which happened to be the main attraction in the village. There were a few cars in front of the hotel as well as ten or so Indian tourists sitting in the restaurant next to the lobby.

Glancing to my right, I saw a crumbling and faded green and red building with a hand-painted sign above the door that read, “Namchung Hotel & Restaurant”. There was an old man – yes, the old man I thought about this morning – sitting on a plastic chair in front of a tiny shop that appeared to be part of the ‘hotel’.

Without hesitation I turned to the right and walked up to the old man, who turned out to not only be the owner of this simplest hotel I’ve ever seen, restaurant and shop, but the only employee as well.

He spoke no English. I spoke only a few words of Hindi and zero words of the other languages that could be heard in this remote mountain region. But we managed to communicate nonetheless.

And before long, this man led me around the back of the building and to my room. It was actually the only room available, not because there were other guests, but because this hotel only had one room. The floor was made of dirt, the bed was made of rope. There was no electricity, only candles. There was also no lock on the door but I had a feeling this was the kind of village where I didn’t have to worry about my belongings.

Excited to be spending two nights here, I threw down my backpack, returned to the front of the building and ordered a chai, which the old man naturally prepared himself. And then we sat there drinking tea together, staring out over the beautiful Himalayas as we communicated through gestures and broken Hindi.

NOT YOUR NORMAL HOTEL

After drinking two cups of chai, I asked the man where I could relieve myself, something I had to act out in order for him to understand. He simply led me to a small patch of grass behind the building, a patch of grass that was in plain view to the residents of at least twenty homes in the village. That grass was the toilet, no matter what kind of business you needed to take care of.

When I asked the owner where I could wash my hands, he went into the kitchen and returned with a glass of water. He then proceeded to slowly pour the water into my hands as I rubbed them together.

And when I inquired about taking a shower, a question to which I could not wait to hear the answer, he quickly pulled out a piece of paper and drew me a map. From what I gathered, I had to cross the street, walk down a small path, turn right onto another path, turn left onto yet another and after a while I would reach the Wakha River. So that’s what I did and sure enough, thirty minutes later I found myself bathing in its icy waters, and loving every second of it.

Returning to the hotel after my ‘shower’, I asked the kind man, who always answered my questions with a smile on his face, where I could find some food. He simply motioned for me to sit on a wooden box in front of his small shop and then he disappeared inside.

When he returned twenty minutes later, he handed me a metal plate with some rice and a few spoonfuls of what appeared to be potatoes in some kind of sauce. Whatever it was, I wolfed it down quite quickly, and while this was no award-winning meal, it was definitely edible, which was a good thing considering that he would cook me the exact same meal the next day for breakfast, lunch and dinner. 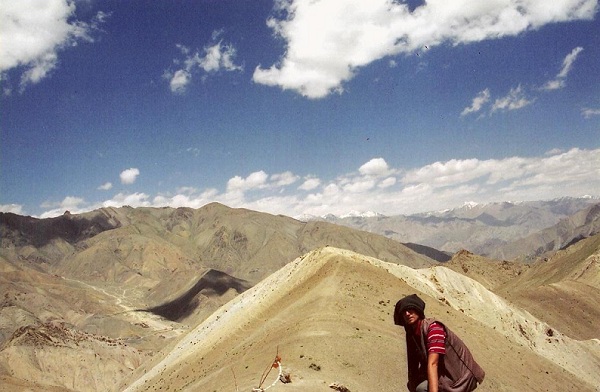 And so my two days and two nights passed at the Namchung Hotel. In between bathing in the river and eating rice and potatoes, I also wandered around the village, played football with some Tibetan children and took a couple of short hikes into the mountains. Every evening though, I would sit right back on that wooden box in front of the hotel, right next to the owner, and we would watch the sunset, drink chai and try our best to communicate.

I’m not sure I’ve ever enjoyed a hotel stay as much as I enjoyed this one. Maybe that’s because apart from a room and some food, I also received my most memorable lesson in simplicity. I didn’t need a carpeted floor or even a sink. I didn’t need a toilet or a shower or electricity or a 10-page menu to order from. I also didn’t need nightlife or shops or a cinema or internet.

I found happiness in just being, in witnessing the Himalayan mountains, in breathing in the freshest of air, in the colors of the houses, in the smiles of the locals and of course, in getting to know another wonderful human being whom I never would have met had I not started traveling.

Could I have lived in Mulbekh forever? Nope. But I’ll certainly never forget my stay at the one-room, dirt-floored Namchung Hotel and the life-changing lesson that stay taught me.

Unfortunately, I don’t have more photos of this simplest hotel in the world. My photos of this region were part of a large batch that I accidentally deleted a couple of years ago and the above were the only ones that were saved.