The Night I Felt The Powerful Vibe Of South Africa

The Night I Felt The Powerful Vibe Of South Africa 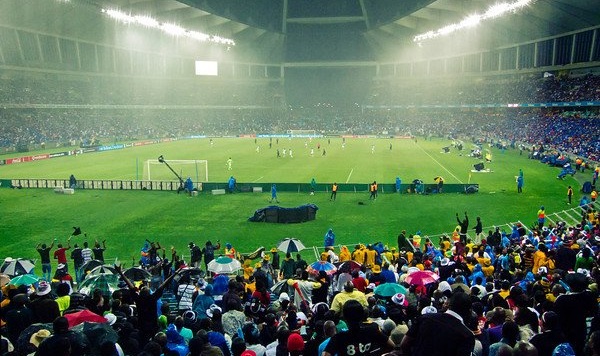 This post is going to highlight another aspect of South Africa, an aspect that probably had more of an impact on me than any of the others during my recent visit.

I’m talking about the ENERGY baby!

Before I arrived in South Africa, I had heard from several travelers that as soon as one arrives in the country, you can instantly ‘feel’ Africa. You can feel the vibe, feel the life, feel that energy.

And I felt it alright.

However, it wasn’t until our wonderful Durban tour operator picked us up one evening and drove us over to the strikingly impressive Moses Madiba Football Stadium that I came to fully appreciate the unique, powerful and without a doubt, addicting, positive energy of South Africa.

Somehow, our South Africa Tourism host managed to secure us tickets to a football match between the Orlando Pirates and the Bidvest Wits, which was quite a feat considering that this match happened to be the Finals of the Telkom Charity Cup.

But the thing is, as soon as we walked through the entrance of the stadium, slithered our way through the crowds and found some seats just a few rows from the field, I realized that the game itself didn’t really matter.

It might as well have been a team of Smurfs playing against a team of balloon animals, as the highlight of the evening involved not what was taking place on the field, but what was taking place in the stands. I hardly noticed the actual football match as I was immediately swooped up in the extraordinary energy created by the 50,000+ people in attendance.

What I witnessed was a massive party, with a football match taking place in the background. Everyone danced wildly, blew into their vuvuzelas, waved their flags, shook their bodies, jumped in the air, swayed together, sang together, clapped their hands (to the rhythm of the music in the stadium not to the play on the field)…without taking a rest for the entire first half. And the fact that every single person in that stadium had such a huge smile on their face just made the already festive atmosphere a heck of a lot more festive.

Of course, once the first half came to an end, I relaxed a little in my seat, sipped my beer and prepared for a twenty-minute break in the action. But, silly me, little did I know that half-time was going to be even crazier (and I mean that in the best possible way) and more spirited than when there were actually players on the field competing for a championship.

The party did not just continue, but incredibly, it somehow managed to grow in intensity as soon as the players were in the locker rooms.

At one point, I started thinking about sporting events back in the US where stadiums must put on quite an elaborate half-time show in order to keep the crowd from falling asleep. But here in South Africa, the half-time show consisted of eight people sitting on a flag in the middle of the field. Basically, there was no half-time show at all.

Instead, there was a person up in the sound booth who cranked up the hypnotic music even louder until the entire stadium was dancing, shaking and jumping around more than ever.

And this went on for the entire twenty minutes of half-time. It was simply an amazing thing to watch. There were no fights, no arguments, no rude or curse-laced chanting. There was dancing and hugging and laughing.

I don’t think there’s a single human being on this planet who, after spending time in a South African football stadium, would not be in the happiest, most joyful and absurdly giddy mood imaginable. It’s just not possible to sit in that stadium and successfully deflect the energy swirling everywhere around you.

And why would you want to do that anyway? The world needs more places where 50,000 people gather to celebrate life. That’s essentially what was taking place. It was one massive celebration based on the understanding that we are all in control of our own happiness.

Why sit around and watch a sporting event in near silence, perhaps occasionally letting out a cheer or two, when you can stand up, shake your body, twist and shout, bond with those around you and guarantee that you all have one insanely memorable, entertaining and enjoyable experience!

So, as the ‘life party’ continued throughout the second half of this football match, as the rain came down, the beers were sipped, photos were taken, high-fives were exchanged and new friends were made, I could not help but feel overwhelmingly overjoyed, not only about being in South Africa and experiencing the ‘vibe’, but simply about being alive.

And that’s about as rewarding a travel experience as it gets.

Have you ever been to a place with such energy or experienced anything like this?

*This trip was sponsored by South Africa Tourism. Several photos above are courtesy of Matt from ExpertVagabond.com whose photographic skills I simply can’t compete with.