The Museum Of Broken Relationships

The Museum Of Broken Relationships

I’m walking around Zagreb, Croatia, freezing cold, hungry and far from being in my normal travel groove. Nothing seems interesting, I have nobody to talk to and I start to think that this might be one of those days where I should return to my room and just work on my laptop all afternoon.

I make the decision to grab some quick food before heading back to my hotel and I begin to wander down a narrow street that seems to be full of dining and take-away options. But as I pass kebab shops, pizzerias and bakeries, nothing seems too appealing and so I continue my search.

Five minutes later and I’m standing at the base of an outdoor set of stone steps, which I randomly start to climb without hesitation, leaving the street behind and inching my way upward. One hundred and twenty seven steps later I reach the top. Now I’m in the Upper Town of Zagreb and the first thing I notice is that there is almost nobody else around. The neighborhood seems completely empty, with the sound of a car off in the distance the only sign of activity.

Heading along Kamenita Street, and without a map or guidebook, I reach the St. Mark’s Cathedral and the main square. I walk around the Cathedral, nod to a couple of the heavily armed security guards guarding what appear to be government buildings and I then turn left and walk down Cirila I Metoda, a street I chose to explore for no particular reason at all.

At this point, I remember that I had been quite hungry and so I keep my eyes open for a place where I could buy a snack. Further down the road I notice a building on a corner, with lights on, a sign out front and even a couple of people hanging outside the door. I skip my way down to the entrance and read the big sign, which leads me to put my hands on my hips and exclaim, ‘Now that’s interesting!’

I was not standing in front of a restaurant, instead, I was standing in front of a very intriguing museum, the Museum of Broken Relationships, which had been recommended to me by another traveler I had met in Slovenia. And now that I had randomly ended up at it’s very entrance, I had no choice but to enter and see what this place was all about.

THE MUSEUM OF BROKEN RELATIONSHIPS

Having won the Kenneth Hudson award for the most innovative museum in Europe this year, this museum promises to offer visitors an experience that differs greatly from a typical museum visit.

The idea is that, while human beings often celebrate love and relationships, as soon as one of our relationships comes to an end, we are trained to automatically try and cleanse ourselves of every reminder of that relationship in order to heal our emotional suffering and return to a state in which we may seek out a new relationships to enter into. So the founders of the Museum of Broken Relationships began to wonder why we don’t formally recognize and focus on failed relationships as well, instead of trying to make them vanish, especially considering the powerful emotional effect that such relationships tend to have on our lives.

Then, the founders took this concept and created the museum, a museum in which the exhibits are all donations from those who have lived through a broken relationship and one which gives people an opportunity to perform an official farewell to someone, to something, to a time that is no longer. As a result, people can choose to deal with the emotional hardships of a failed relationship by exhibiting whatever it is they once felt the need to hold on to.

A SAMPLE FROM THE MUSEUM

First, this is probably one of the smallest museums I’ve ever visited, only occupying five tiny rooms. However, I spent over 2 hours inside, moving slowly from display to display, reading every single story of a broken relationship and the significance of the objects that were donated to the museum.

To give you an idea of how I managed to spend so much time here, let me show you a sample of some of the items that were on display, as well as the stories that went with them. (I’ll show a photo of the object and then write out the accompanying text that was written by the person who donated the item.)

“An Under-Knee Prosthesis”
In a Zagreb hospital I met a beautiful, young and ambitious social worker from the Ministry of Defence. Love was born when she helped me get certain materials, which I needed for my under-knee prosthesis, as a war invalid. The prosthesis endured longer than our love. It was made of sturdier material!

“A Broad Bean Heater”
There’s a saying in Egypt that broad beans are best served warmed up. Our relationship never got warmed up, but the friendship remained as strong as dried broad beans.

“A Honey Bunny”
The bunny was supposed to travel the world but never got farther than Iran. This is not photoshopping, but a real photo of the bunny in a desert near Tehran.

“A Hundred Swedish Crowns”
This small bill is the only thing left after a relationship and a trip to Stockholm. He told me: “Keep it, you’re going to use it the next time you come and see me…” But there was no “next time”.

“Air Sickness Bags”
A range of air sickness bags as a memento of a long-distance relationship. One Croatia Airlines, one Lufthansa, one Hapag Lloyd Express and three GermanWings. I think I still have those illustrated safety instructions as well, showing what to do when the airplane begins to fall apart. I have never found any instructions on what to do when a relationship begins to fall apart, but at least I’ve still got these bags. 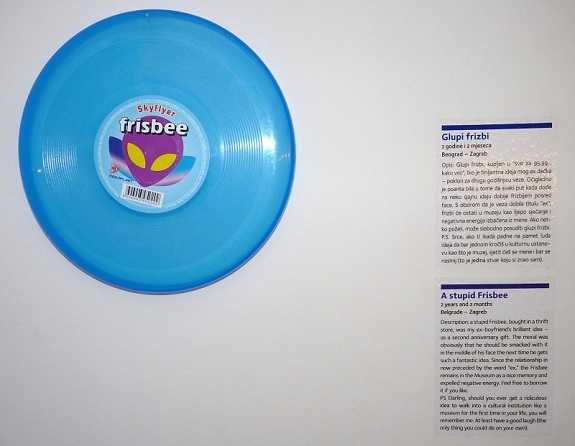 “A Stupid Frisbee”
Description: a stupid Frisbee, bought in a thrift store, was my ex-boyfriend’s brilliant idea – as a second anniversary gift. The moral was obviously that he should be smacked with it in the middle of his face the next time he gets such a fantastic idea. Since the relationship is now preceded by the world “ex,” the Frisbee remains in the museum as a nice memory and expelled negative energy. Feel free to borrow it if you like. PS Darling, should you ever get a ridiculous idea to walk into a cultural institution like a museum for the first time in your life, you will remember me. At least have a good laugh (the only thing you could do on your own).

And so, room to room I went, ever so slowly, not wanting to miss a story, not wanting to skip even one remnant of a relationship that no longer exists. While at first this may seem to be quite a depressing way to spend an afternoon, the effect of my visit to this museum was actually quite the opposite. I felt a sense of connection to others, a sense of understanding, and perhaps even better, a sense of relief that my own failed relationships are just a handful of an infinite number of relationships that all ended up the same way.

So if you’re ever in Zagreb, Croatia, and especially if you find yourself wandering around town wondering why your relationships just never seem to work out, pay a therapeutic visit to the Museum of Broken Relationships. Far from breaking down and crying non-stop for hours, you’ll instead be skipping around the streets in no time at all, happily aware that you are by no means alone.