The Most Frightening Kayak Trip On The Planet

The Most Frightening Kayak Trip On The Planet 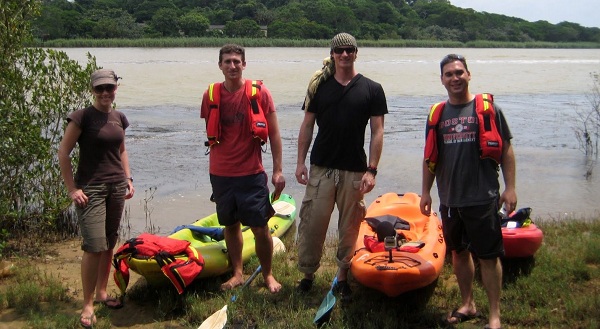 Have you ever had an experience that you were so excited about before it began, but then, once you found yourself in the middle of that experience, you started to wonder if it was such a good idea after all?

That’s exactly what I went through at one point during my visit to South Africa. And it all had to do with an early morning kayak ride.

Ordinarily, I am more than happy to participate in a leisurely kayak experience and never have I felt my life threatened in any way whatsoever while paddling around any body of water. But, when I found myself paddling a kayak around the St. Lucia Estuary in South Africa, that all changed, and it changed quite quickly.

Fish don’t scare me, but what does scare me is the sight of an 8-inch shark fin rising out of the water only 2 meters from my kayak, just seconds after leaving the shore, especially when there was never any mention of sharks during the orientation we received before getting into the water.

And when I pointed out to our guide that I saw what appeared to be a shark fin, only then did he inform us that this estuary is, in fact, home to three different kinds of sharks. Great news.

However, after keeping my eye on the middle of the estuary for about five minutes and not seeing any more fins, I finally began to relax and enjoy the paddling. But of course, when the main aim of your kayak trip is to spot hippos and crocodiles in the wild, any moments of relaxation are not going to last very long at all.

The first crocodile we spotted was resting on the bank of the water, but once our three kayaks were only 8 meters or so away, it quickly entered the water and began to swim off. I started to breathe again, right until the son-of-a-witch turned around, popped it’s two eyes out of the water and just stared at me. Yes, me.

Then, as my kayaking partner Rachelle (from TheTravelBite.com) and I frantically tried to catch up to the rest of the group (we were in the kayak at the back), the crocodile would dip down into the murky water and ten seconds later, re-appear in a new location, still following me, still staring me down and still making me somewhat nervous.

Crocodiles eat people. And being in the wild with them, busting through their habitat in three large kayaks suddenly seemed like quite a questionable idea. It continued to seem like a questionable idea for the next fifteen minutes as that massive crocodile swam behind me, once even popping up directly to my right, only 3 meters away. 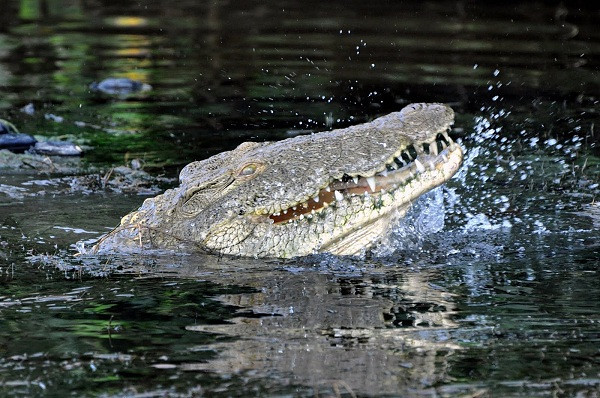 So, when we spotted a 2000 kg hippo grazing on the side of the estuary and then suddenly head towards the water, break into a jog (apparently hippos can run at a speed of 44 kms/hr) and continue jogging in the direction of our kayaks, I really began preparing for a most unfortunate end to my life.

Luckily, the hippo ran right into the water where he, too, proceeded to stick only his eyes above the surface, watching us quite closely, just as the crocodile was doing from the other direction.

Now you might think that the ideal thing to do at this point in order to calm down and regain one’s composure would be to take a break from kayaking, a short rest if you will. We took a break alright, paddling across the estuary to a quiet spot along the shore where we parked the kayaks and stepped onto dry land. But this ‘quiet spot’ turned out to be an area where hippos enter and exit the water in order to eat.

And if there’s one thing I learned about hippos during my time in South Africa, it’s that these beasts do not appreciate it when anything or anyone is standing in their path as they roam the banks of an estuary. So what did we do? We hung around this area for about ten minutes.

In the end, we were not attacked of course, but when we climbed back into the kayaks, we were then taken to an area of thick marshes, narrow channels and mangrove forests, all places that could easily hide a hungry crocodile or hippopotamus.

It was not a comfortable ride as I tried to pay close attention to my surroundings, as if my spotting a crocodile swimming towards me would in any way prevent it from biting off my arm.

But, at the same time, just as is the case with all of those above experiences, kayaking with crocodiles, hippopotamuses and sharks is something I would do again without hesitation. It’s also something that I would recommend to every individual who travels to this part of the world. Just face the fear, feel the terror of being surrounded, in the wild, by such amazing creatures.

After all, this is perhaps one of the most unique opportunities in South Africa to get so very close to these animals. It’s impossible to describe the feeling properly so you’ll just have to experience it for yourself.

And just think of the photos you’ll take!

Our kayak tour in South Africa was operated by St. Lucia Kayak Safaris, which I would recommend to anyone looking for adventure and interesting knowledge about the area and wildlife you encounter.

And as a side note, nobody has ever been injured or attacked in the many years that this kayak tour has been operating!