The Highlights Of Northern Syria

The Highlights Of Northern Syria

A few days ago, I took a tour.

Actually, it wasn’t really a tour. Four other travelers and I split the cost of a minivan and driver to take us to what we were told were three of the most impressive sights in northern Syria. What the hotel manager who organized the minivan failed to inform us (and what all five of us travelers failed to research) was that each of these three sights was located quite a significant distance not only from our hotel, but from each other as well.

So, what we were told was going to be an easy 9am – 4pm trip turned into a 9am – 10:30pm grand excursion, with 9 or those 13 hours spent traveling inside of a cramped and ludicrously uncomfortable minivan.

Just to give you an idea, it took us almost two hours to get from Aleppo to the first sight we visited, two hours to then reach the next place, two hours and forty-five minutes to travel from there to the final stop of the tour and another three hours and fifteen minutes to drive back to Aleppo.

However, despite the crazy hours spent in that van, despite my terrible headache as a result of not eating the entire day (it was Friday and everything was closed in the small towns we passed through) and despite the facial sunburn and dehydration, I of course managed to enjoy the day.

In fact, if I ignore all of the day’s challenges, this trip was actually quite memorable, as every place we visited left me wishing I had an entire day to explore that one sight alone.

What did we see exactly?

Well, the first stop was… 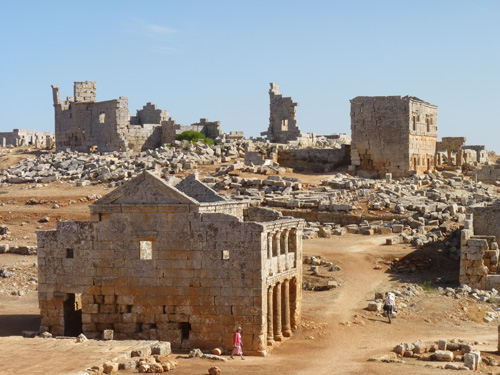 Sarjella is the largest of the ‘Dead Cities’, a vast collection of the ruins of over 700 Byzantine towns, villages and monastic communities. Offering one of the best glimpses into the Byzantine world, these ”cities” were abandoned once the political center of the region moved from nearby Antioch to Damascus, further to the south. The town of Sarjella has been abandoned for over 1500 years but many of its semi-complete buildings remain in relatively good condition.

At first sight, Sarjella seemed to be an uninteresting collection of rubble, but upon further exploration, it contained an intriguing group of structures. The area is much larger than it appears from a distance and I spent a good hour and a half wandering all over the site, walking through the stone remains of a tavern, meeting house, bath house and church. The now isolated location and surrounding moonscape-esque terrain created a mysterious atmosphere that could be felt quite intensely as I stood alone in the middle of this once bustling community.

Entrance Fee: 75 SP ($1.50 USD) – This was the price listed on the sign but nobody asked us to buy a ticket. We just walked in and none of the people sitting around the entrance said anything. 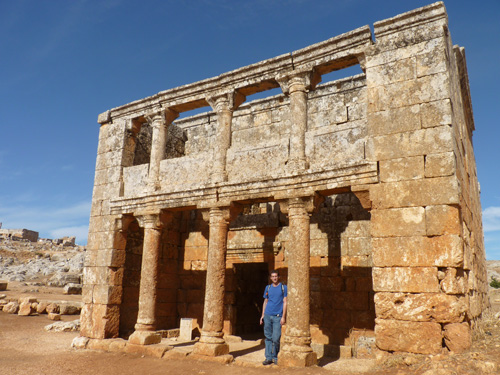 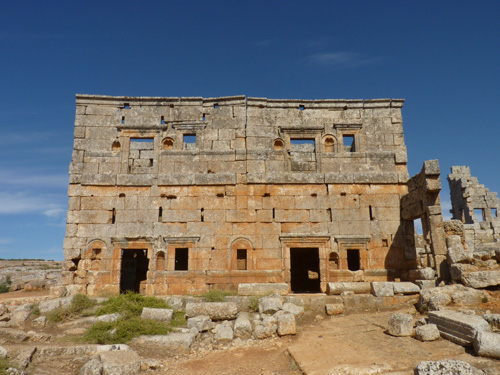 And then we moved on to… 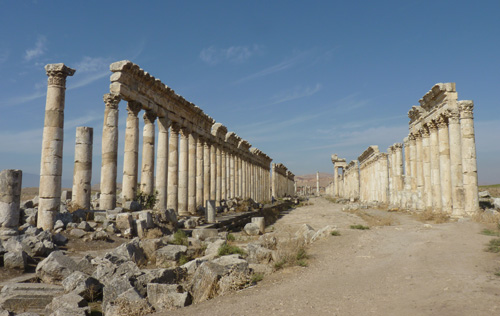 This Hellenistic city, founded in 300 B.C. by one of Alexander the Great’s generals, was one of the three main cities of the Seleucid Empire and once had over 500,000 inhabitants. It eventually became part of the Roman Empire in 64 B.C. (the period of time when much of what is visible today was built) and later a part of the Byzantine Empire. Running 1.85 kilometers long, a significant portion of Afamya’s main street has incredibly withstood repeated conquests and even a massive earthquake.

This place blew me away. To see an ancient Roman avenue, lined with hundreds of columns stretching for such a great distance and set on a plateau overlooking the Ghab valley, was quite a remarkable sight. All I did was walk up and down this avenue a couple of times but I had never been to an ancient Roman city where it was so easy to actually envision what life was like back in those days. Not only were there hundreds of mostly intact columns, but there were archways, facades, temples, bathhouses and other structures that were quite well-preserved. I could almost hear the horse and chariots traveling along this main road as well as the philosophers offering their wisdom to all those who passed them by.

Entrance fee: 150 SP ($3 USD) Amazingly though, nobody asked us to pay the entrance fee here either. We just got out of the minivan and walked right in without anyone approaching us for a ticket. 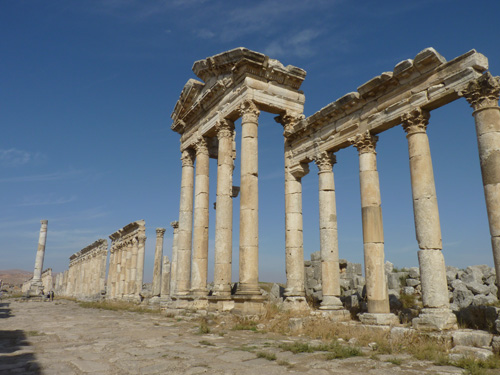 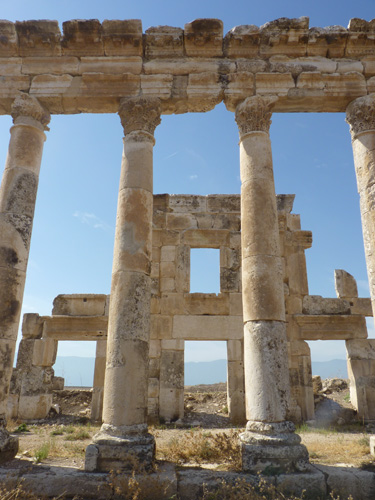 Once we were finished with Afamya, we made our way to… 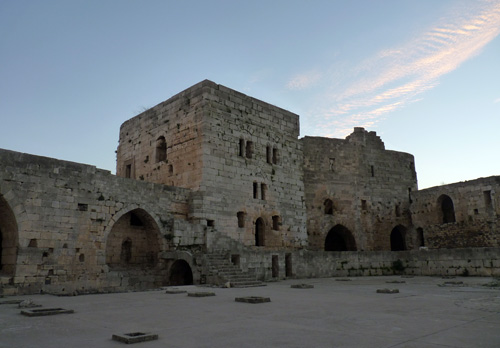 This surreal castle was built between 1142 and 1271 as one of the handful of fortifications whose purpose was to guard the main passage route from Turkey to Beirut. It was built by the Order of the Knights of St. John and was generally considered to be impenetrable given its solid construction and impressive location some 750 meters above sea level.

It didn’t take long at all for this place to rise straight to the top of my list of favorite things I’ve seen or done so far in Turkey and Syria. In fact, this mountaintop castle is right up there on my list of favorite sights that I’ve ever seen, anywhere on this planet. Unfortunately, however, I only had a few minutes to explore this place.

After traveling the two hours and forty-five minutes from Afamya to Krak de Chevaliers, we naturally arrived quite late, at 5:35pm to be exact. The problem was that the castle closed at 6:00pm and when we ran up the steps and tried to enter, we were told that we could not buy a ticket because it was too late in the day for us to safely navigate through the now dark passageways.

It took about 5 minutes of begging and pleading before the ticket man agreed to sell us tickets under the condition that we would remain in the castle for no more than 10 minutes. With tickets in hand, all five of us ran up the main corridor and through the main gate where we began what has to be one of the wildest visits to any historical site that I’ve ever been a part of. Everything was in hyper-speed as we bolted from room to room, vaulted hall to vaulted to hall and dungeon to dungeon. We climbed towers, stood on top of outer walls, crossed moats, explored dark tunnels and wandered into mysterious corridors. After ten minutes, we heard one of the castle’s security guards yell out to tell us that it was time to leave. But we didn’t want to leave at all as everywhere we turned there was more and more sections of this incredible castle to explore. And so for the next thirty minutes we played cat and mouse, with the security guard trying to chase us down while the five of us tried to hide/explore as much as possible.

Eventually, after 45 minutes inside the castle, we found ourselves cornered as the security guard caught us off guard by going silent for a few minutes and suddenly popping out of a long, dark hallway that we were about to enter ourselves. Surprisingly, he wasn’t mad at us and he just laughed as we gave up in defeat and began our march towards the exit.

My photos don’t do justice to this place at all and I’m actually thinking about revisiting Krak de Chevaliers once I make my way further south. I would really like to spend an entire day here as this structure appeared far more impressive to me than any fort, castle or other historical structure that I’ve ever come across in any of my travels. 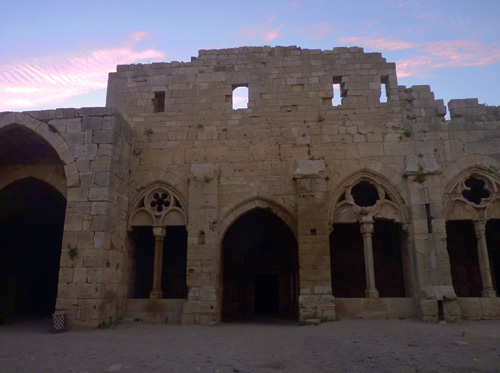 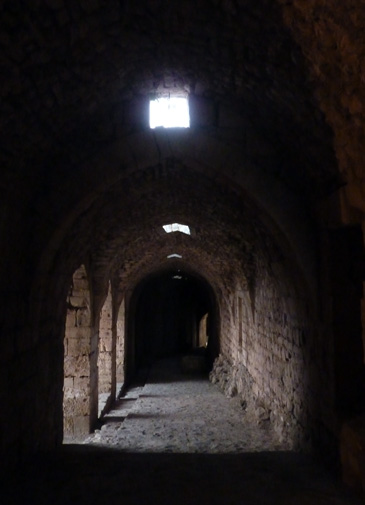 After Krak, we had to endure the final (and longest) leg of the day’s journey, but we finally reached Aleppo once again, only a mere six and a half hours later than scheduled. At this point, I simply walked into the hotel lobby, asked for my key and went straight to my room. I was in quite a daze, not feeling too well and focused only on getting some sleep. And as soon as I entered my room, I plopped down on the bed with all of my clothes on and instantly passed out.

The next thing I knew it was 9:00am the following morning and I was sitting up in bed somewhat confused, struggling to determine whether I had actually visited Sarjella, Afamya and Krak de Chevaliers or whether those fascinating places were simply memories from a most interesting dream.