The Food Stall On The Street Corner

The Food Stall On The Street Corner 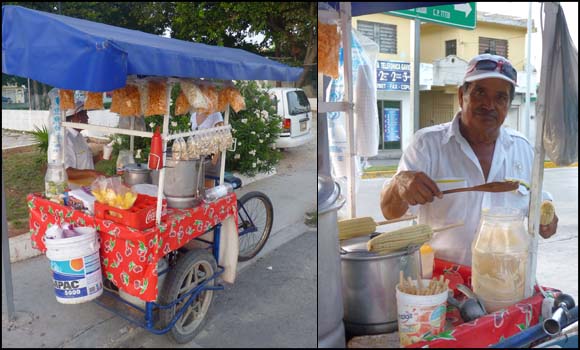 At 4:00pm every single day for the past nine years, Francisco has slowly climbed onto a worn out bicycle seat and begun pedaling his food cart across Playa del Carmen. His journey always begins in front of his one-room home on 4th Street and always ends exactly fifty blocks away, on 104th Street, where he sets up his stand on the street corner.

Francisco is 78 years old. He’s about 5 feet tall, has skin that looks like dark leather and always wears a white baseball cap hanging loosely on top of his head. He doesn’t have any visible teeth and is always dressed in the exact same pair of pants and button down shirt, both of which are beyond repair and in need of replacements.

His small rickety food cart has barely enough space for him to serve up the one main item on his menu. It’s called esquite and is a popular Mexican snack made of hot corn kernels mixed with mayonnaise, sour cream, cheese and chili powder. I happen to like esquite very much and Francisco happens to prepare the best I’ve found, not only in Playa del Carmen, but in the entire state of Quintana Roo.

You can’t be in a rush if you want one of Francisco’s esquites, as he’s not exactly the fastest server in the world. Even when there’s a line of three or four people waiting, he moves ever so slowly, which seems to be the maximum speed that his fragile body allows. Often, he’ll just stop midway through the esquite preparation process as if lost in thought and unsure of what the next step should be.

But when he finally piles on the last scoop of chili and hands over the large plastic cup to his customers, he does so with such pride that I often find myself holding onto my esquite as if it were some delicate and treasured piece of art work.

One day I asked Francisco how he ended up as a food vendor. He answered quickly, with a hint of both sadness and humor in his voice:

“After my wife passed away, I realized that I am too old for a girlfriend. So why not sell esquite instead?”

And so every day, he rides across town, plops his plastic stool on a relatively quiet street corner and waits for customers. Occasionally, I’ve noticed him chatting with other locals, but more often than not, whenever I’ve seen him, he’s staring off into the distance or just looking straight down at the ground.

At one point, my friend and I had an idea. We decided to buy Francisco a radio so that he could at least listen to some music instead of just sitting there for so many hours without anything to do. But when we asked him why he doesn’t have a radio, he laughed for a few seconds and then said, “I don’t want one. I don’t like today’s kind of music. It doesn’t make me want to dance.”

A few days ago, when I went for an esquite, Francisco recognized me as soon as I got out of my car. He immediately stood up from his stool, waved to me a couple of times and waited for me to approach.

Normally, this is the warm reception that occurs whenever Francisco recognizes a customer, as his face lights up with a huge smile, he shakes your hand and begins chatting away. Sadly, as I’ve found out on a couple of occasions, if you don’t visit him for a week or more, he most likely won’t remember you the next time you do come around and you’ll have to start the process of becoming friends all over again. 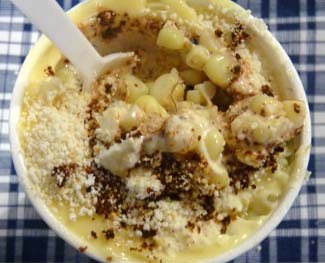 During that visit a few days back, I noticed that Francisco was eating a bizarre-looking item of food that I had never seen before. When I asked him what the item was called, not only did he tell me, but he then insisted that I take half of his portion to try it myself. After noticing my positive reaction to what I can only describe as a yummy combination of flan and cornbread, he then took a few minutes to give me precise directions to the only place in town that sells it, despite the fact that he had two customers waiting to order an esquite.

Eventually, Francisco wished me a good night, one of those sincere farewells that clearly wasn’t an automatic response to a leaving customer. I shook his hand one more time, walked over to my car and drove back to my apartment.

And then I sat down in a chair and enjoyed every spoonful of that esquite, never forgetting the kind and generous man, whose 78-year old legs pedal 50 blocks across town every single day just so that he can sit on a stool for hours by himself, on a lonely street corner, in case I, or anyone else in the area, happens to have the sudden urge for an esquite.

If you’re ever in Playa del Carmen and want to try out Francisco’s esquite, you can find him every night between 5pm – 10pm on the corner of 30th Avenue and 104th Street, right under the giant billboard.