The Final Ride: My European Trip Comes To An End

The Final Ride: My European Trip Comes To An End

Twenty minutes later, as I stood on the train platform waiting for this mysterious ‘Personnel Train’ to arrive, I began wondering if I was about to board a train full of cows and donkeys, or maybe a circus train full of clowns and bearded women, for my ride from Targoviste back to Bucharest.

However, the train that eventually rolled alongside the track was unfortunately not a circus train nor was it involved in any type of farm animal transport. The train actually appeared to be the same as the train that I had taken to Targoviste the day before.

In the end, I really have no idea what the ticket woman was so shocked about as my final train journey turned out to be as comfortable and pleasant as all of the other train journeys in Romania and every other country I visited over the previous two months. And even better, the sun set during this trip, lighting up the entire Romanian horizon in one of those spectacular displays of orange, red, pink and purple that force us to stop for a moment and just appreciate being alive.

Once the sun had disappeared, I spent the rest of my time on the train just staring off into the distance, completely lost in thought as I replayed in my mind the previous nine train journeys that I had taken during this trip. 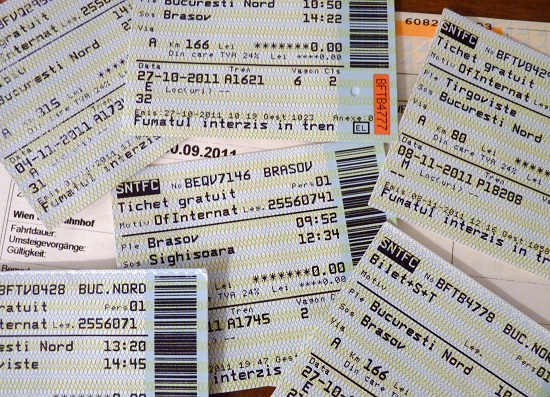 The time passed quickly as I recalled my long ride through the Swiss and Austrian Alps way back at the end of September as well as my trip from Vienna to Ljubljana, Slovenia, a country I had never been to before. I remembered my conversations about Pow-Wow Lip Scrub on the train from Ljubljana to Zagreb, Croatia, a train ride that brought me not only to the Museum of Broken Relationships, but closer to my next destination, Bosnia & Herzegovina, another country I had wanted to visit for quite some time.

From Bosnia & Herzegovina, I had quickly made my way across Serbia before entering Romania, where I began my stay with a full-day train journey from Timisoara to Bucharest. A few days later, I headed north, exploring Transylvania as I traveled by train from Bucharest to Brasov and eventually, from Brasov to Sighisoara and from Sighisoara to Sibiu. And then, I made that decision to turn around and return to Bucharest, where, apart from the two-day trip to the town of Targoviste, I decided to stay put for my final 8 days of this most memorable European adventure.

After replaying the entire journey, it was only natural that by the time this final train ride reached the Gara de Nord train station in Bucharest, I found it quite difficult to leave the car I was sitting in. I was actually the last person off the train as I spent a couple of minutes just enjoying the silence on board and trying to ensure that the memories from my recent travels would stay forever embedded in my mind.

Eventually, I did stand up though, and I collected my backpack and jumped down onto the train platform. And just like that, my two months of European train travel came to an end.

MANY THANKS TO GIVE

I certainly wish to thank the fantastic team over at Eurail.com for providing me with such an opportunity to not only explore some more of Europe, but to experience, for the first time during my 12 years of travel, the extensive and efficient train systems on this continent. Having that Eurail Pass in hand certainly made train travel incredibly easy in every country I visited as usually, all I needed to do was show up at the station, check-in at the ticket counter to receive a seat number and board the train. I did not experience a single problem along the way and I can’t imagine traveling across Europe as I did without one of these convenient passes.

I also want to thank all of you, my readers, not only for following along with the journey itself, but for offering your valuable input, recommendations and comments along the way, all of which I read, listened to and took into account wherever I happened to be traveling. Heck, there were even quite a few of you who offered me a place to stay during this trip and even more who I managed to meet up with for a meal or a drink…and for those interactions I am most appreciative.

And while there are still a few more posts about Europe that I plan to write over the coming month or so, if you ever have any travel questions about any of the places I visited on this trip, just let me know. I’m always more than happy to help out as best I can!

While this was my own adventure and my posts are written based upon my own personal experiences, I must make a note that Eurail.com had provided my Eurail Pass for this trip as part of their Blogger Project for 2011.