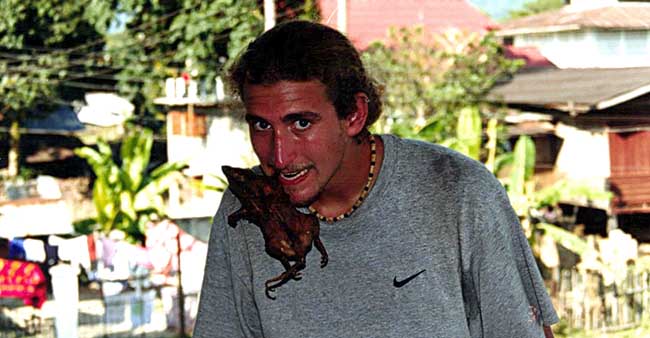 The idea for this post came about after I mentioned one of the “dumbest things I’ve done while traveling” on my Facebook Page the other day. The result was not only having my kind readers confirm that what I had done was indeed quite stupid, but also a long list of tales from others who were willing to share some of their not-so-brightest moments from their own travels.

I figured I’d move that discussion over here by adding a few more examples of how I can be a little, well, ‘slow’ at times. Luckily, however, I’m fairly confident that every single traveler out there has had plenty of similar moments, which hopefully we’ll soon discover!

Mango incident: I was in India, someone handed me a mango for the first time in my life and I had no idea how to eat it. So, I just stuck the entire thing, with the skin on, in my mouth. The man who gave it to me looked horrified and asked “What are you doing?”. Sensing that I had done something stupid, I just said, “This is how I eat mangoes.”

Eating a rat: While in Vang Vieng, Laos, two other travelers and I decided to visit the local market one evening. The idea was that we would each purchase some kind of food item to bring back to the guesthouse and share with the group for a nice local dinner. So, I bought a rat from a woman who was selling whole rats that were sliced open and grilled over a small fire, complete with rat nose, rat eyes, rat toes and rat tail still in place. When we returned to the guesthouse, the others were not too thrilled with my choice and so I was left to take a bite out of it myself (see above photo). After taking a bite, I looked a little more closely at the rat only to discover over a dozen maggots moving around in the flesh. I vomited. And then I felt extremely sick to my stomach for a good couple of days afterward.

Wrong airport terminal: This one’s a classic and has probably happened to many people….I once waited at the wrong terminal at Bangkok’s old Don Mueang International Airport for over three hours for a friend of mine who was arriving from Australia. Had I spent one second reading all of the information on the huge “Arrivals” screen I would have clearly seen that her flight had arrived at Terminal 1, not Terminal 2 where I had been waiting. I ended up leaving the airport completely worried and confused as to why she hadn’t arrived, and naturally, my friend had left the airport completely upset as to why I wasn’t there to pick her up. This tale did end well though, with a crazy story of how we finally managed to meet up in Bangkok.

Nearly frozen to death: Combine -20C temperatures, a massive snow storm, sidewalks covered in ice and my occasional stubbornness and you get a very dumb decision on my part. It happened during the winter of 2012 while I was in Bucharest, Romania and I had just finished meeting up with Niall Doherty for some afternoon shisha and good conversation in the old city center. After parting ways, I tried to hail a taxi to take me back to my friend’s apartment where I was staying, but every taxi I asked either wouldn’t take me or they wanted an exorbitant price because of the snow storm and resulting road conditions. I refused to pay the inflated rate and so, despite being in jeans, t-shirt, light winter jacket and running shoes, I decided to walk the 4 kilometers back to the apartment in protest since that was my only other option. By the time I arrived, my face was a block of ice, I couldn’t feel my feet or hands and I was about to collapse, feeling quite sick as I stumbled through those final steps. When my friend opened the door, I just looked at her and said, “I’m going to die.” Later that evening, after telling my friend the story, she simply stated, “Why didn’t you just take the metro? You walked past three metro stations”.

(Here’s a video I made that shows you exactly how to survive an Eastern European winter!)

Blood for nothing: I was working on my first cruise ship when, one evening during my second week on board, I wanted to get some fresh air and just stand on the outside deck for a while. But since my work was finished for the day, I was no longer wearing my uniform and so I had to sneak through the ship in my shorts and t-shirt in order to reach the main outside deck, hoping that I wouldn’t get caught. Eventually, I found a large door that led outside and I pushed it open, only to have a huge gust of wind push it straight back, causing the bolt of the door to slice open my thumb. As blood started to pour out, I quickly ran inside to the Reception Desk to get help and they called the nurse and had me taken care of. The next day I had to meet with the Hotel Director and I assumed that I would get in trouble for being out of uniform in the passenger areas. Instead, he just looked at me and said, “You do know that we have an entire outside deck just for crew members?” Oops.

Bucket shower: In India, many budget hotels only have cold-water showers and if you want to take a hot shower, you need to ask the hotel staff to heat you up a bucket full of water. The first time I did this, the owner of the small hotel brought me the bucket of hot water and I went into the bathroom, where I scooped up some water with a small bowl. I then dumped the water straight over me. It never crossed my mind that the steam coming out of the bucket was a result of the water being extremely hot and that the proper method was to mix that water with some of the cold water from the actual shower. I just poured a bowl of near boiling water on myself instead. Oh yeah, it hurt.

I’m sure at this point you know what’s coming. It is indeed time to hear about your own ‘not so bright’ moments during your travels, whether they happened overseas or in your home country. So, what’s some of the dumbest things you’ve done?

Please help me feel better about my own dumb moments by sharing yours below!