The Day US Immigration Actually Welcomed Me Home

The Day US Immigration Actually Welcomed Me Home 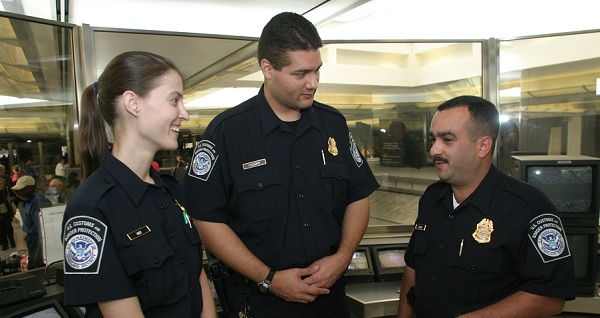 As many of you have already read in others posts of mine, as a long-term traveler, I do not look forward to certain aspects of returning to the United States for my yearly visits to family and friends. This has nothing to do with actually being in the US as, these days, I am able to thoroughly enjoy my time here as I bounce up and down the east coast for a few weeks.

And while it still is true that every visit to my home country requires me to re-adjust to what has now become more of a foreign culture to me than many of the cultures I spend so much time immersed in overseas, again, even this ‘reverse culture shock’ or readjustment period is nothing I really dread.

What does make me hesitate about returning to the US is the experience of passing through US Immigration & Customs at the airport, an experience that, more often than not, is an unpleasant one given my extensive travel history. I’ve now visited enough ‘unfriendly’ or ‘suspicious’ lands to warrant a harsh line of questioning, thorough inspection of all my belongings, having my laptop turned on and all the files examined and on that one special occasion after spending some time traveling through Pakistan and Afghanistan, an intense and disturbing interrogation.

Naturally, when my flight arrived in Fort Lauderdale, Florida the other day (coming from Mexico), as excited as I was to see my family, I could not help but notice the building nerves that spread throughout my body as I walked from the arrival gate to the Immigration line. My palms became sweaty, my heartbeat increased and I reminded myself of the importance of staying calm if I was once again treated harshly by an Immigration Officer.

The line at Immigration this time was unusually short and after a three minute wait, I soon found myself standing in front of an Officer who immediately took my passport and swiped it into his computer system. And then, without a word, he flipped through the pages of my passport until he discovered a visa stamp that caught his attention.

And of course, that visa was for Iraqi Kurdistan. After studying this visa, the Officer finally looked up at me and asked, “Do you speak Arabic?”

Immediately, I prepared myself for another interrogation and had a feeling that this was going to be another hellish trip through US Immigration.

However, after answering “No” to this question (not that the answer should make any difference whatsoever), the Officer didn’t say a word and before long, I realized that this was, in fact, not going to be a typical US Immigration experience for me after all.

After flipping through my passport some more, and asking me to identify what countries many of the stamps belonged to (as some of the stamps from last year’s visit to the Middle East, such as Syria and Lebanon, are written almost entirely in Arabic), this calm Immigration Officer then asked me a few more specific questions. And as I always state, I have no problem at all with any Immigration Officer asking me questions. I would ask myself questions as well if I saw my passport.

But it was the manner in which this Immigration Officer asked these questions that actualy made this trip through Immigration a…pleasant….yes, I would go as far as to use the word ‘pleasant’….experience as opposed to what I’ve experienced before.

Ever so politely, the Officer continued to ask me about my travels, why I enjoy traveling so much, what were some of the other countries I’ve been to that were not in my current passport and of course, what I do for work. And as soon as I mentioned that I work online, he let out a short laugh while shaking his head and then he said, “That’s what I thought you were going to say. Good for you. That’s great that you want to travel around the world. Welcome home.”

While it is true that I was kept at his Immigration booth for a significantly longer period of time than most of the other US Citizens passing through, I must state that, for the first time that I can recall, I was treated with nothing but respect and courtesy, which is exactly what should happen according to the US Customs & Border Patrol’s “Pledge to Travelers”. 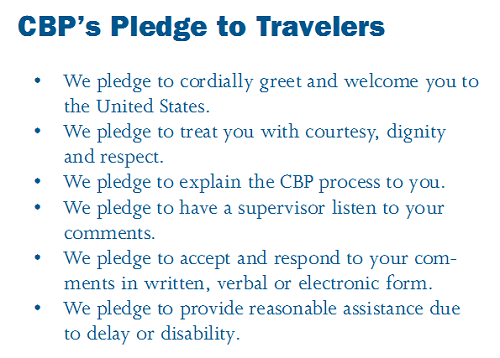 A CHANGE IN ATTITUDE?

Eventually, the Officer handed me back my passport and wished me the best of luck in my travels, having never raised his voice, never making any accusations and never treating me as a threat to my own country simply because of the diverse collection of stamps in my passport.

And while this may not be something that many people spend much time thinking about, the manner in which I am treated upon arrival in my home country makes a huge difference to me. It’s frustrating to spend such significant time trying to educate myself first-hand about the world, only to be treated like a criminal for doing so. Also, I want to know that the borders of the United States are protected by people who understand the value of international travel, not by close-minded individuals who automatically feel threatened upon seeing one passport stamp in Arabic.

Well, I am happy to report (ecstatic, in fact) that I finally encountered the type of Immigration Officer that should be cloned thousands of times and placed at every airport and land border crossing in the country. While still doing his job effectively (after all, he wasn’t asking me questions out of personal interest), he not only made me feel welcome in the country of my birth, but made me feel as if my life of travel was not a crime, but something worthwhile and truly valuable.

Of course, it’s somewhat disappointing that such a positive US Immigration experience stands out as something extraordinary and completely surprising, but it’s a start. Perhaps this is an indication of a shift in attitude within the US Customs & Border Patrol agency (CBP) that just might help make entry into the United States more bearable for everyone.

Do you have a recent experience with US Immigration or any other country’s Immigration that you want to share?