Standing Speechless at a Communal Sink

Standing Speechless at a Communal Sink 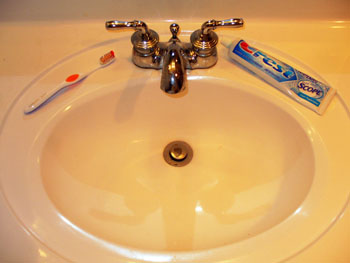 The following is a short tale about an inexplicable occurrence – one of those moments to which being stunned into silence is the only reasonable reaction. Such moments seem to be an inherent part of travel and are typically uplifting and extraordinarily positive.  This particular story, from one of my visits to Thailand a couple of years ago, popped into my head last night as I was doing some stretches and heard my knees cracking.

Waiting in the arrival hall of Bangkok’s Don Mueang International Airport, I found it strange that my friend had not yet come through the sliding doors that led out from the customs area. Her flight from Melbourne had arrived at 8:30pm and despite watching an endless stream of passengers pass by, both from her flight and from flights that arrived over an hour later, my friend never appeared.

And of course, my cell phone had died the day before and so I had no way of trying to communicate with her at this point.

I waited for three hours without any luck before deciding to jump in a taxi and return to my guesthouse in the center of Bangkok.

This particular guesthouse was actually an old teakwood home, well-hidden down a series of narrow alleys leading off the backstreets near Khao San Road. I had only stumbled upon it during an afternoon of exploration and because of its quiet location and family-run atmosphere, I chose to stay there. Unfortunately, as I had planned to meet my friend at the airport, I had never informed her of the name or location of the guesthouse.

At midnight I sent a quick email to my friend and then returned to my room. I sat up for another hour, unsuccessfully trying to determine what might have happened. Eventually, I decided to brush my teeth and as this was a budget guesthouse, I had to walk downstairs to the first floor in order to use the communal sink located in one of the hallways.

I started brushing my teeth while pacing back and forth, something that I do all the time for some bizarre reason. After about twenty seconds, a door to one of the rooms near the sink opened and I turned around. There stood my friend, smiling and shaking her head.

She simply said, “I only know one person in the world who paces back and forth while brushing their teeth and whose knees crack so loudly at the same time. I heard it through the walls and knew it had to be you.”

I nearly spit my toothpaste all over the floor.  Out of all 1,000+ accommodation options in Bangkok, she happened to end up at the exact same, nearly-impossible-to-find, 11-room guesthouse.

How did we miss each other at the airport? It turned out I failed to notice on the arrival monitor that her flight had arrived at Terminal 1. I had been waiting at Terminal 2.

I want to hear about the inexplicable experiences that you’ve had. Share your incredible, random, bizarre stories in the comments below…and as always, thanks for stopping by!