When I visited Singapore recently, which was the third time that I had traveled to this small city-state over the years, something quite bizarre occurred. I actually enjoyed myself.

During my previous visits, I simply didn’t connect with Singapore at all. I found it to be expensive, culture-less and somewhat boring, three attributes that are not exactly friends of a budget adventure traveler. So when I discovered that I needed to spend a week in Singapore once again, I somewhat unenthusiastically began my search for accommodation.

Hostels in Singapore are pricey in comparison to other Southeast Asian countries as one can easily expect to pay $25 Singaporean Dollars for a dorm bed ($19 US) or around $80 S for a private room, which you can bet will not have a private bathroom and will be the size of a phone booth. I knew all of this ahead of time but instead of settling on some random hostel, I decided to broaden my search to include actual hotels in Singapore. And you can imagine my shock when my first search resulted in what appeared to be the perfect deal:

$80 S for a modern, private double room with private bathroom and free wi-fi 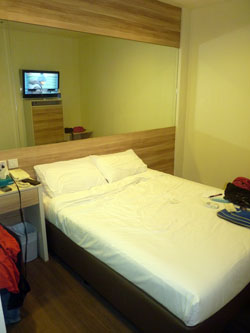 The name of the hotel was Hotel 81, which appeared to be a somewhat new chain of budget traveler-friendly hotels. With over 20 locations in Singapore, the concept seemed to be taking off, however, the only location offering the $80/night deal happened to be on Dickson Road. Of course, I’m sure that most of you are not too familiar with Dickson Road either, just as I wasn’t familiar with it until I looked at a map and nearly burst into tears of joy upon discovering that it was located in the heart of Singapore’s popular, ideally-situated “Little India” district. (Remember, my addiction to all things India, both the good and the bad, is more intense than my need for oxygen.)

Anyway, (and I am in no way being sponsored to write about Hotel 81) this hotel turned out to be what I will so boldly declare as the best budget accommodation option for travelers visiting Singapore. Okay, it might be a bit expensive if you’re traveling on your own, but if you’re at least two people, you’ll only be paying slightly more than you would for a basic hostel. And when that tiny premium provides you with an ultra-comfortable, clean, well-appointed private room, I certainly would be more than happy to spend those few extra dollars, just as I did on this past visit.

So, that’s the sleeping part of my trip to Singapore.

Wandering around Singapore’s Little India is, as they say, a trip, as in a hallucinogenic journey into a magical land that could only exist in fantasy and never in reality. However, Little India does exist. Basically, it’s an exact replica of an Indian city except that the streets are spotless, the buildings well-built, the population density is about 1/100th the normal density and people actually wait for the little green person to start flashing before crossing the street. Too incredible to believe, I know, but I swear I’m not lying.

And if Indian food is your kind of thing, be warned that you may struggle to eat, not due to a lack of Indian restaurants but rather, an abundance of Indian eateries unlike anywhere else on the planet, including India. You’ll have your choice of South Indian food, such as dosas, uttapams and idlis, North Indian cuisine such as Punjabi curries, Gujarati thalis and tandoori chicken as well as Calcuttan kathi kebabs, Oriyan sweets, stuffed rotis and parathas, biryanis and samosas and pakoras. There are at least two hundred Indian restaurants crammed into Little India, making it nearly impossible to decide where to eat when you’re hungry.

On my first night in Singapore, I ended up roaming the streets of Little India for forty-five minutes before finally forcing myself to choose an eatery. I randomly ended up at Gokul Vegetarian Restaurant. 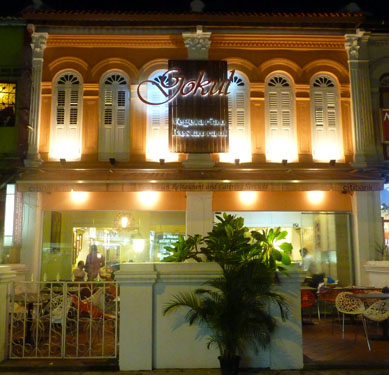 I’ll keep the description of my experience at Gokul’s rather short. In fact, I’ll only use one sentence to tell you how I felt about the vegetarian curries that this place served up. Here it is… “This restaurant was so good that I ended up eating here four of the six nights that I was in Singapore.“

Enough said. If you’re in Singapore, and you like Indian food, eat here.

Okay, okay, I’ll tell you a little more. The preparation of the food, from the Navratan korma, to the Dal Makhani, Saag Paneer and Vegetable Jalfrezi resulted in flavors so intense and fresh that my reaction to every bite would have probably made for the perfect television commercial. The naan and rice, the mango lassis and masala chai, and the service as well were all flawless. One of the waiters even befriended me on my first visit, making sure I sat in his section on my subsequent visits while refusing to accept a tip at any time.

So that’s what you can expect at Gokul’s (located on Upper Dickson Road, no website). And the prices were reasonable as well, with samosas, two curries, rice, naan, lassis and chai for two people totaling $30 S ($23 US). And I wasn’t sponsored to write about this restaurant either. I just want to spread the word!

Well, this part may have been a bit misleading. I didn’t exactly surf, as in surf the waves, during my time in Singapore. But I did visit the Sands SkyPark, which sits on top of the three 200m towers that make up the Marina Bay Sands Hotel and resembles one massive surfboard in the sky.

And I must say that this building, and pardon the simple terminology here, is the coolest-looking building I have ever seen. Simple as that. From every angle and at any time of day or night, this structure is mighty impressive, as are the views from the observation deck and park at the top, where I spent a good two hours staring out over Singapore.

I’ll let the photos do the talking with this one… 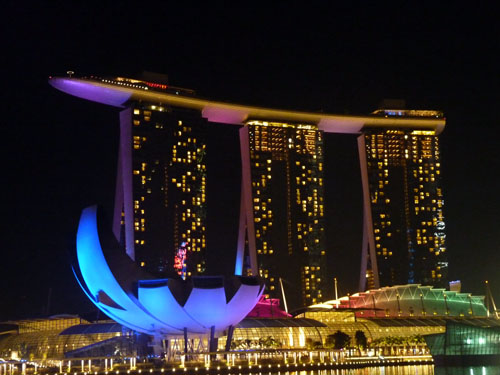 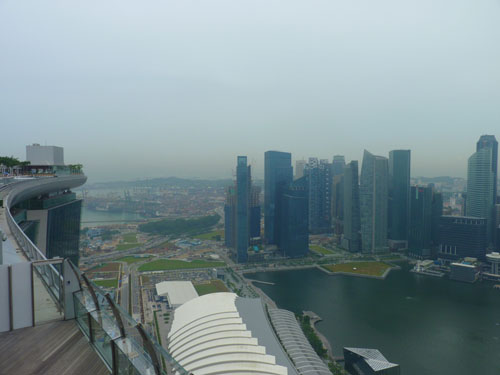 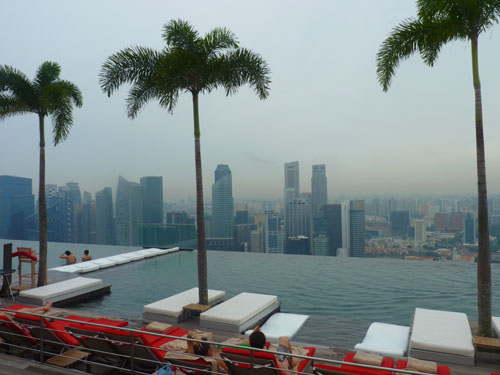 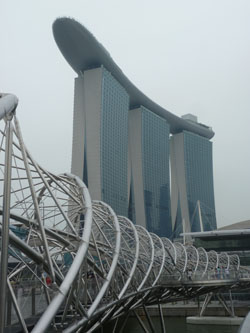 Well, it took me three visits to Singapore to finally connect with this city. And connect I most certainly did, in a way that I never could have expected. On several occasions this time around, as I walked down the road, sat in a park or strolled along the canal, I even began thinking that “I could live here”. But for now, I’m content with just visiting, especially now that I’ve discovered a perfect trio of quality budget accommodation, divine Indian food and a spectacular surfboard in the sky.

Have you been to Singapore or considered visiting?