Should Travel Warnings Stop Us From Traveling?

Should Travel Warnings Stop Us From Traveling?

Right now I’m actually in the stages of deciding where my next adventure will take me, and as a result, it was only natural that I check the US Department of State’s Travel Warning website. This is generally how I begin any of my travel planning, not in order to learn which countries I should circumvent, but quite the opposite, to learn which regions I should consider visiting.

A few months ago, I wrote a post about the growing misconception that Mexico is a dangerous destination that should be avoided by travelers. So when I checked the Travel Warning website today, it came as no surprise to find Mexico listed right there after Mali and Mauritania as places to avoid, despite the fact that the closest I’ve come to any danger during my seven months of living down here was when I encountered this thing below while on the beach. 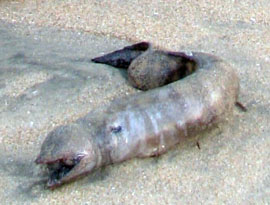 And it is this Travel Warning that explains why, during my recent six day trip to Florida to visit my family, everybody I spoke with asked me the exact same question:

“Why are you living in Mexico when its so dangerous?”

I really do understand why one would ask this, especially considering the unusually high volume of negative news articles and reports (in print, on television and on the internet) and even an ‘anti-Spring Break in Mexico’ public service announcement, currently circulating around the US.

My answer to this question typically involves an explanation about how my life in Mexico is about as peaceful as life gets and that not only have I yet to find myself in the midst of a shoot-out, drug bust or gang battle, I have yet to see one, read about one or hear others talking about one in any of the dozens of places I’ve visited or lived in throughout this land.

And if further reinforcement is needed, I simply point out the seemingly infinite occurrences of violent, unspeakable crimes that seem to take place on US soil on such a shockingly regular basis. Truthfully, the chances often seem much higher that I would be caught up in some random shooting in the US than here in Mexico.

This thought alone makes me wonder if the USA itself should be on the Department of State’s ‘Travel Warning’ list?

It’s a diverse list. And while some of these places should probably be avoided (Iraq and Sudan immediately come to mind) as travel destinations by anyone except the most intrepid and experienced of travelers, I fear that many of the other nations will suffer from the same fate as Mexico. Now that they are labeled ‘dangerous’, for reasons ranging from large demonstrations, possible harassment, political tension, border clashes, anti-US sentiments, lawlessness, terrorism and general security concerns, most people will simply cross them off of their list of potential travel destinations, even if they have a desire to travel there.

I suspect, and this is based upon my own experiences and those of other travelers close to me, that many of these places are not actually dangerous to travelers, but simply warrant a little further research, some additional preparation and perhaps an extra dose of caution in order to ensure one stays clear of any potential trouble. In no way am I advocating putting oneself into a dangerous situation, but I do believe that a rewarding travel experience to such places as Israel, Nepal, Philippines, Sri Lanka and Lebanon is more than possible and shouldn’t be abandoned simply because of ‘the list’.

IF TRAVEL WARNINGS DICTATED MY TRAVELS…

…I would have missed out on most of my life-changing adventures.

My visit to Pakistan immediately comes to mind. While few would argue that there are risks involved with traveling here, the most potentially dangerous situation I faced proved to be one of the most educational nights of my life in the end. And by learning some basic Urdu, purchasing local clothes and familiarizing myself with some general local customs before I crossed the border, I was able to somewhat ‘blend in’, which led to a much deeper and safer glimpse into the culture of this troubled nation.

There is also Indonesia, another frequent recipient of a Department of State Travel Warning. Yet when I traveled across the Indonesian island of Sumatra while such a warning was in effect, the only violence I encountered was the overly-enthusiastic shaking of my hand by almost everyone I encountered along the way. The people of Sumatra never tried to harm me, instead inviting me into their villages and homes and sharing with me the wonders (Lake Maninjaui in particular) of their awe-inspiring, yet seldom-visited, island.

When I traveled to Nepal during the height of the Maoist insurgency, I expected to face a spattering of violent protests, robberies and kidnappings, just as the Travel Warning stated. However, from the remote West to Pokhara, Kathmandu and into the Himalayas, all I found were endless smiles and displays of generosity from the Nepali people. Even with the strict 8pm curfew in Kathmandu imposed by the military at the time, the biggest threat to my well-being seemed to be the landslides that occurred all over the country as a result of the monsoon rains.

And last week I emailed a friend of mine who is currently traveling through Rwanda (another favorite of the Travel Warning list) and I asked for her initial impressions. She replied with a lengthy email, one that included the words ‘beautiful’, ‘peaceful’, ‘friendly’, ‘clean’ and ‘safe’ more times than one would find in a description of Switzerland. And when she wrote that the entire population of Kigali participates in mandatory community service on the fourth Saturday of every month, proudly helping to maintain as clean and attractive a city as possible, all I could think was, “in Rwanda?”.

Ask anyone if they would consider traveling to Rwanda and I’m quite confident that 99% of respondents would think your nuts. But in reality, there is no more threat of danger in Rwanda than there is anywhere else.

LOOKING BEYOND THE TRAVEL WARNINGS

We need to look beyond travel warnings and advisories. While it is important that we take caution when deciding where to go, and avoid jogging off to places such as Baghdad in a pair of shorts and a t-shirt thinking that we’ll be perfectly safe, in reality, we should use these warnings as starting points for further research.

When we are in search of first-hand knowledge and possess a strong desire to visit a particular country, for whatever reason it may be, we owe it not only to ourselves, but to those people we hope to interact with and learn from, to not turn our backs simply because we have been told the population may erupt into protests.

One thing we can do to assess the true risk of a particular destination is to seek out and communicate with others who may be currently or who have recently visited the country in question. Who better to offer direct, useful advice than such a person? Chances are, such shared information from other travelers will be more than enough to keep us smart, safe and far from any potential danger.

It is difficult to imagine my travels without Mexico or Honduras or Pakistan or any of the other places deemed ‘dangerous’, those places whose true danger in the end proved to be the threat of a sore jaw as a result of excessive smiling.

Of course, there was that one kidnapping in Bangladesh, but even that too was well worth it!

I’m curious about your thoughts on travel warnings…have you visited a country that was on ‘the list’ and had a completely positive experience? Or perhaps you’ve chosen to avoid any country with a warning?