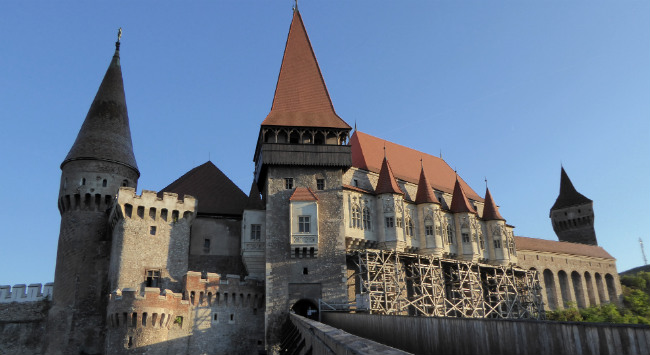 [jbox]If you’re interested in a free trip to Colombia, LAN Airlines just let me know about a cool promotion they’re doing. It only takes a few seconds to enter and the prize is a 14-day trip for two to Colombia – flights, accommodation, all meals and a camera included. You can enter here if you wish: Captivating Colombia – Good luck![/jbox]

Remember the chestnut festival I talked about that really didn’t have many chestnuts? That was where the first half of this Romania road trip came to an end.

And while the second half of this Romania road trip also didn’t involve many chestnuts – none in fact – that was alright with me. What it did involve – going deep underground, a stay in a remote mountain village, a beautiful castle with barely any visitors and the 117th highest paved road in Europe that, despite it’s unimpressive-sounding ranking, just might be one of the most spectacular – was more than enough to once again convince me that Romania is one of the most underrated travel destinations on that planet.

Turda (better than it sounds)

Have you heard of Turda? Probably not.

I know, the name isn’t so attractive in English. The name is downright dirty in fact. However, in this town of Turda, we came upon the Turda Salt Mine, which was actually quite attractive and perhaps the most surprising experience of this trip.

This old salt mine, dating back hundreds of years, eventually closed but was re-opened in 1992. It has now been renovated and turned into what has been labeled as one of the “25 Unbelievable Travel Destinations You Never Knew Existed“, which I just learned while doing some research. Not bad for an old salt mine.

Here’s how it goes.

You descend into the deep tunnel and you walk along the main corridor for some distance. You then enter a room that leads you towards the main cavern. You now have a choice – an elevator or what looked like 6 million steps – to get from this level all the way down to the bottom, where, immediately upon arrival you will find yourself standing in awe in the heart of this massive ‘room’. The awe not only comes from the stalactites hanging from the ceiling and the sheer size of the place but also from the architectural design of the renovated interior.

Oh, the awe might also have to do with the huge ferris wheel you can ride or the ping-pong tables or bowling alley or mini-golf course or billiards tables that you can enjoy while down there as well.

Sound a bit silly and touristy? It does. But when you’re actually there, it’s quite, pardon my American, awesome. The design of the main cavern is simply spectacular and the activities offer a chance to have a very cool (literally, it’s cold down there) and very unique experience. We chose to play ping-pong for about an hour, wearing our jackets due to the crisp air, and getting into quite an intense competition. Some taunting, name-calling and paddle-slamming might have been involved.

We spent about 3.5 hours in this salt mine, wandering all over the place, and could have easily spent more. Next time I could make a weekend out of it, if only there was a hotel inside that thing.

From Turda, we drove out of town (as I sang my ping-pong victory song of course, much to the disapproval of my friends) towards a destination that you absolutely won’t find in any guidebook or any travel website.

And unless you have a friend who is renovating an old house way up here on the mountaintop, in this village of 12 people that can only be reached by 4WD truck along a narrow, seldom-used, muddy track, the start of which is located some 2 hours away from the closest town (called Brad), and which winds up the mountain for 30 minutes, the chances of making it here are slim.

Among a collection of four or five wooden homes, where these villagers live, as if time hasn’t changed in decades, completely isolated from the world below, sits my friend’s house. It was a work-in-progress when we arrived but I could immediately see the appeal – the pure beauty, quiet and simplicity of the real Romanian countryside.

We spent two days up here, cooking meals over a camp fire, enjoying the views across the valley, staying warm with vin fiert and an old wood-burning heater and just having a great time among friends. We hiked up the mountain a bit and picked some fresh blackberries, we drank homemade tuica, we talked about all kinds of topics and we used the outhouse when needed, separately of course.

And then, before I knew it, we were back in my friend’s truck, heading down that muddy track, back to civilization, sort of. It actually took a couple of hours of driving until we were anywhere with more than just an occasional house along a pot-holed, lonely road.

Eventually, a larger village and then a town. And then we were moving along a well-paved road towards our next destination…

Let’s go with this.

Here’s how many other visitors we saw: 8

This castle sums up exactly what blows me away about Romania. A 15th century, unbelievably impressive Gothic-Renassaince castle, just sitting there in the middle of the country, such an amazing destination. Yet so few visitors.

We basically had this castle to ourselves. Where else can you have such a castle to yourself? Nuts.

Our castle visit helped break up the journey to Sibiu that day, where we arrived just after sunset. We threw our bags down in a hostel, went for a wander, ate a good dinner at a restaurant located in an old underground wine cellar and then we had a good night’s sleep after our lengthy day. Besides, all of us had already been to Sibiu before, so on this trip, it was just a rest stop before we tackled what was perhaps the most anticipated day of the journey.

At 10am the following morning, we loaded up the car and we set off for the Transfagarasan.

At the top of the mountains, just before you enter Romania’s longest tunnel, you find a great location to eat lunch, not so much because of the food, but because of the surroundings.

Also, at several points during the drive, you can stop at tiny roadside communities where you can buy homemade wine, cheese and other local foods to try. And you can always stop…actually, you’ll want to stop….every twenty meters so that you can admire one surreal view after another.

What is actually a mere 90 km (54 mile) journey, took us 6 hours to reach the end due to all of the stops we made.

Right before the end of the Transfagarasan, we reached the last destination we had wanted to visit, the actual castle where Vlad the Impaler had resided for some time. Vlad is the Wallachian Prince that the Dracula character was based on and while everyone thinks of Bran Castle, a very well-known and preserved castle near Brasov, as his castle, that’s just a tourism stunt and he never really spent any time there. The Poenari Castle, on the other hand, was one of his real residences during the 15th century.

The castle sits atop a cliff, perched in a most improbable location high above the valley. To reach it, you must walk up 1500 steps that wind up the mountain. Here’s four words. Well worth the climb.

While the castle itself is mostly in ruins and there’s not much left of its structure to explore, the location, with views out over the valley in both directions, is quite spectacular. The sheer drop on all sides of the castle walls, straight down 1000 meters, is sobering. The silence apart from an occasional gust of wind, the lack of visitors, and yes, the impaled people that greeted us, was even a bit spooky. (He wasn’t called Vlad the Impaler for no reason.)

Hmmm….I don’t think I should end this post with a photo of impaled humans.

I’ll end it with photos of those of us who partook in this Romania road trip, giving you a glimpse of each of our roles…

2. Irina. She burned herself while making hot wine in Bulzesti.

That completes the overview of this 2-week road trip. Hope you enjoyed the experience!

Have you heard of any of these destinations above? Anyone want to join my next road trip around Romania?

(My Wander Across Romania tour that I’ll be offering next June will actually follow the route we took on this 2 week adventure. Details here: Romania Tour – and more)