A Recap Of My Wander Across Mexico Tour

A Recap Of My Wander Across Mexico Tour 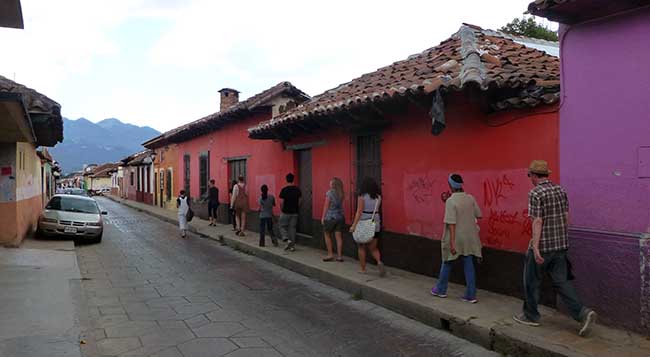 Yesterday, my second Wandering Earl Tour came to an end. And I must say, it was a strange feeling to say goodbye to another group of splendid people, people whom I was fortunate to get to know quite well over the past two weeks.

I would absolutely love to continue traveling with everyone, to continue sharing experiences, to continue engaging in interesting conversations and to continue learning about each other and the places we visit.

But of course, such a trip must finish eventually and after fifteen days of wandering across Mexico, from the beaches of the Caribbean coast all the way to the central state of Oaxaca, while stopping in a variety of destinations along the way, the time has come to part ways with this group of ten fellow travelers.

However, in order to keep the memories alive (and to provide others with what I think is a great itinerary for a Mexico tour), I shall now give an outline of the route that we took during this Wander Across Mexico excursion. This will be a basic summary as I plan to write several posts, with much more detail, about this Mexico trip in the near future. There is just so much I do want to share! 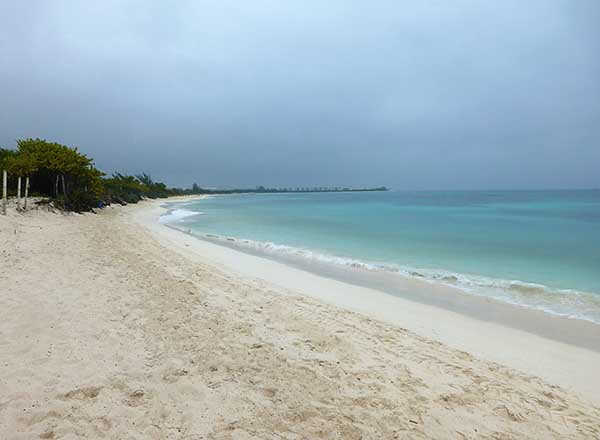 White sand beaches, turquoise waters, soaking up the sun, and unfortunately some rain…that sums up the first two days of this tour as we hung out in the laid-back, international beachfront community that is Playa del Carmen. Of course, we also ate at many of my favorite restaurants all over town, where we sampled alhambres, tostadas, empanadas, enchiladas, chilaquiles, tacos al pastor and other fine items, while often washing them down with a few beers, an activity that had a tendency to lead late into the night.

Tanned and ready to hit the road, we then left Playa in two rented vans early in the morning of day three. Our first stop would be the tiny town of Akumal where we all jumped in the water to snorkel with the sea turtles that swim around just off the shore. Luckily, we arrived at 7:30am, far before the crowds, and as a result we had the beautiful beach to ourselves, and every person in the group managed to see some turtles.

From Akumal, we continued south to Tulum, the Mayan ruins that are more well known for their impressive location atop a cliff along the Caribbean Sea than they are for the actual structures to be found there. We spent a couple of hours walking around the site before relaxing on the tiny idyllic beach located at the bottom of the cliff face. 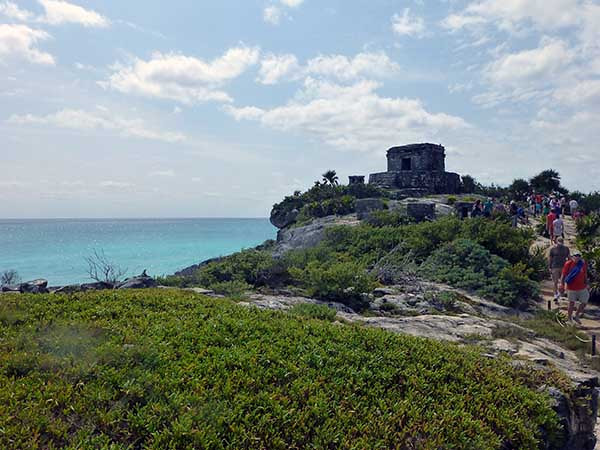 And then we were off to Valladolid…

We spent two nights in this beautiful town, with its colorful pink, green, yellow and red buildings, cobblestone streets and lanes, picture-perfect cathedral-backed zocalo (main plaza), excellent local food market and Mayan chocolate shops, not to mention its friendly people, many wearing their traditional Mayan dress as they go about their daily business.

And just a few miles from the center of town lies the cenotes of Samula and X’Keken, which are underground water-filled caves that visitors can enter and even swim in. We went over to Samula and I think everyone in the group except for me jumped into the chilly water…

After leaving Valladolid on day five of the trip, we took the country road to Chichen-itza, probably the most well-known Mayan ruin site in Mexico, where we spent over three hours exploring the various groups of structures despite the extreme daytime heat. 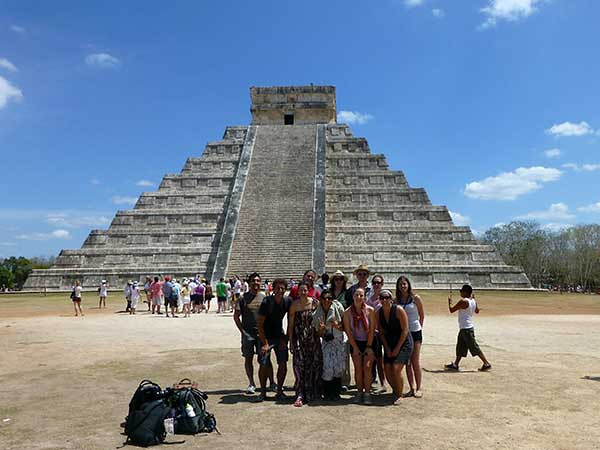 We popped into a roadside restaurant for a quick, and delicious, lunch of roasted chicken, before we were back in our vans and back on the nearly-deserted, one-lane road that cuts through dozens of tiny Mayan villages in the Yucatan Peninsula. Two hours later we pulled into Izamal, the small town where just about every single building is painted yellow. It’s quite a sight to see and it amazes me that more travelers don’t spend time in this unique community.

While in Izamal, we walked around the streets, visited the old monastery (which is also yellow), hiked up to the top of the Kinich Kak Mo Mayan pyramid that sits at the edge of town, sipped some coffee in the main square and ate a variety of local Mayan dishes at one of the few sit-down restaurants. 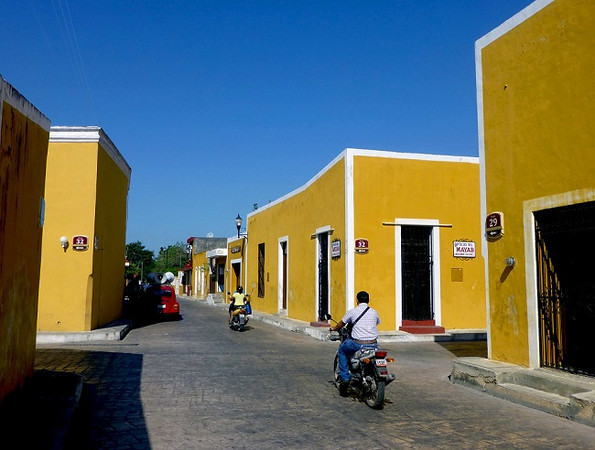 The following day was a long one as we drove back to Playa del Carmen, a drive of about three and a half hours. And once we arrived, most of the group went straight to the beach for the afternoon before we all met up again at the bus station for our overnight bus to the town of Palenque, located some 12 hours away in the state of Chiapas.

Luckily, the bus, as is common with Mexican buses, was incredibly comfortable, with wide seats, plenty of leg room, two bathrooms and a relaxing environment that made it quite easy to catch at least a few hours of good sleep, which was a bonus considering that we arrived in Palenque too early in the morning to check into our hotel.

Instead, we just dropped off our bags, freshened up a bit and went straight back out, catching a colectivo (shared van) over to the Palenque ruins, another Mayan site dating back some 2200 years and set amidst the thick Chiapas jungle.

And in the end, despite being tired from the long bus journey and despite being in the midst of the busiest couple of days of the trip, I think just about every person in the group enjoyed Palenque more than the other ruins we had visited. It was actually my first time there as well and I thought it was the most impressive Mayan site I’ve seen…perhaps due to the fact that you are still able to climb up many of the temples, and as a result, marvel at the perfect views over the other ruins and the jungle below. 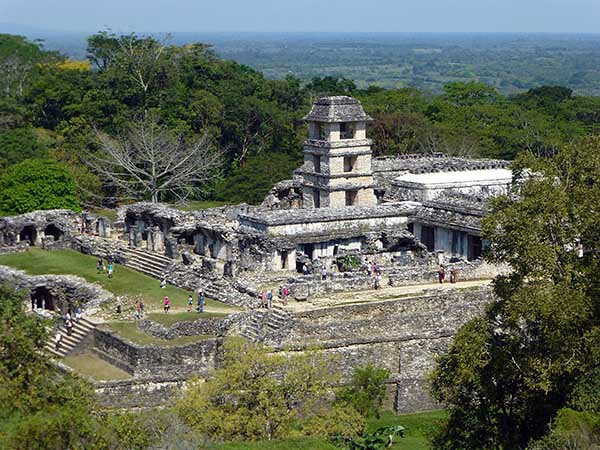 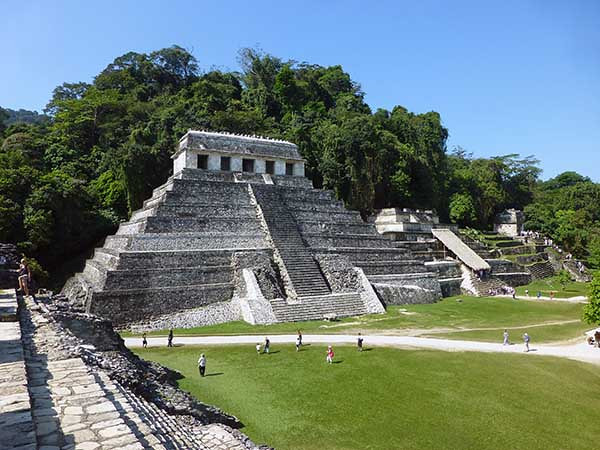 We only spent one night in Palenque and since there wasn’t much to do after visiting the ruins, we all had an afternoon rest followed by a local dinner in town and a nice little gathering on the roof top of our hotel where we had a few drinks, once again, well into the night…

The following day involved a late start in order to catch up on sleep before we boarded another bus, this time to take us on the 5.5 hour journey to San Cristobal de las Casas.

And once in San Cristobal, we all happily threw our luggage down in our rooms at our hostel, ready to spend the next four days exploring this town and the surrounding region. 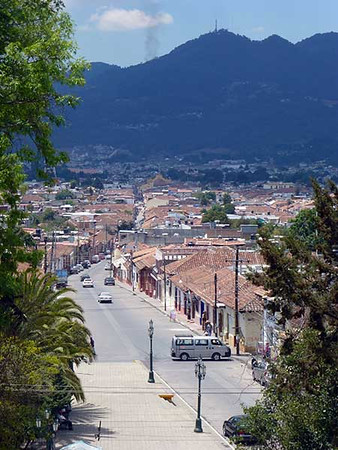 While in San Cristobal we wandered all over this “Pueblo Magico”, embracing it’s colonial, lively atmosphere, climbing to the top of hills, visiting its most well-known cathedrals and historical sites, spending time at a local cultural museum, eating in a variety of restaurants, watching the concerts and dance performances in the main square and simply enjoying what has to be one of Mexico’s most beautiful and livable towns. 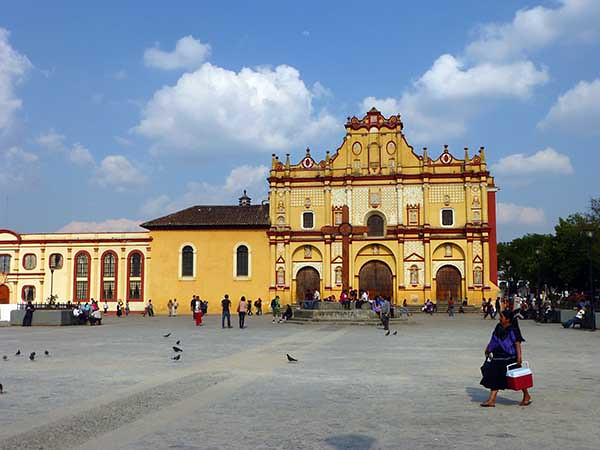 Of course, we also took a couple of day trips, including a boat ride through the massive Sumidero Canyon….

….and a visit to the fascinating Mayan communities of Zinacantan and San Juan Chamula. If you haven’t read my post about San Juan Chamula yet, check out “The Most Amazing Church I’ve Ever Seen & Can’t Show You” in order to learn about the intriguing, secretive religion that is practiced inside of the main church.

Finally, on the fourth day of our stay in this beautiful region, and after everyone had a chance to roam around San Cristobal one last time, we went to the bus station to catch our overnight bus to the city of Oaxaca.

Oaxaca was the final stop of this tour and it was a great place to wind things down. It’s a vibrant, attractive colonial town that feels a little more European than the other places we visited. With its large bustling markets, atmospheric, tree-lined parks, highly-regarded local cuisine, trendy cafe culture, traditional mariachi bands in the main square, unique local crafts, beautifully lit cathedrals, pedestrian-only avenues, endless street performances and infinite number of food stalls, it’s no wonder that most visitors label Oaxaca one of their favorite destinations in all of Mexico. 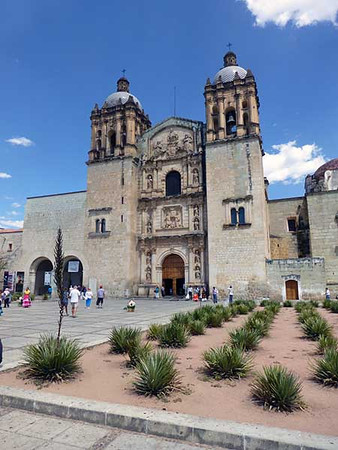 We spent our first day here trying to do, see and sample all of the above, not to mention partaking in another Oaxacan activity, mezcal tasting at a local mezcal bar. Oaxaca is famous for its mezcal which is an alcoholic drink derived from the maguey plant. It should therefore come as no surprise that once the mezcal session was over, a session that involved several strong shots, we all magically found the courage to munch on some chapulines (local specialty of fried crickets) before our evening meal.

The next day, we somehow managed to wake up early and venture over to Monte Alban, home to a series of ancient Zapotec ruins perched above town on a small mountain. We spent a couple of hours roaming around the site, but we were struggling the entire time, due to both the heat and the very late night we had the night before (yes, another late night!). 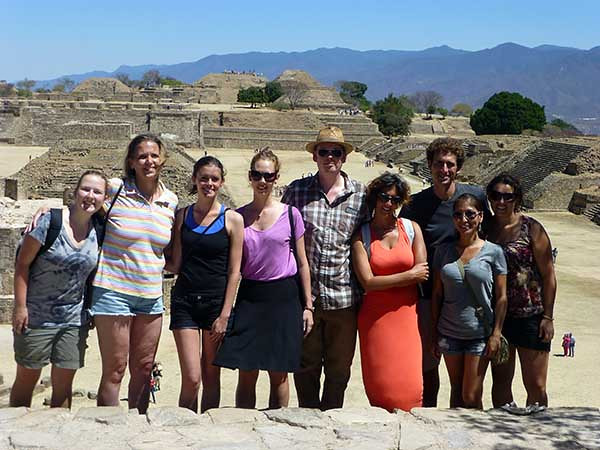 After the ruins we stuffed our faces with tlayudas (massive fried tortillas covered with beans, cream, cheese, vegetables and for those who want, meat) in the local food market, had a much-needed afternoon rest and then went out for our final group dinner at a restaurant overlooking the main square.

And then we hit one last rooftop bar in the historic center for a quick farewell drink before the time came to start saying goodbye to each other.

All of a sudden, my second Wandering Earl Tour was over.

Before I end this post, I would like to thank every single person – Michelle, Lisa, Ken, Heather, Rashelle, Cindy, Queenie, Anastasia, Laura, Alison and Anil – for participating in this Wander Across Mexico Tour. I had an incredible time over the past two weeks and, as I sit here at the Oaxaca Airport about to board my flight back to the US, I have already begun to play our trip over and over again in my mind. And I’m smiling the entire time. You will all be missed greatly and I have no doubt that I will be talking about this tour for a long, long time!