Proof of Onward Travel – a Story and a Solution

Proof of Onward Travel – a Story and a Solution

You’ve just spent two months traveling around Australia and now you’re about to spend another two months in Southeast Asia. And while you enjoyed every single minute of your stay in Oz, you’re ready to explore the intriguing cultures of Malaysia, Indonesia and Thailand.

You arrive at Melbourne’s International airport 2 hours prior to your direct flight to Kuala Lumpur and you quickly join the long check-in line at Malaysia Airlines. Thirty minutes pass until you are the ‘next one in line’ and you then eagerly hand over your passport and ticket confirmation number to the airline agent.

She types away on her keyboard, asks if you have any luggage, checks to make sure you packed that luggage yourself and then goes back to typing away on her keyboard again. At that point, clear visions of the Malaysian jungle slowly begin to materialize in your head and you smile widely, unable to hide the thrill of traveling to unexplored lands.

And you remain in that blissful trance, right up until the moment you hear the airline agent say…
“Can I please see your proof of onward travel?”

You now stand there confused, unaware of what she is trying to ask you. You hear the question repeated and yet you still cannot grasp it’s meaning.

“In order to enter Malaysia, you must provide proof of onward travel out of Malaysia. You only have a one-way ticket,” she explains.

“What? I’ve never heard of that,” you reply, and a most unwelcome fear begins to swell up inside.

“We cannot let you board your flight without proof that you will be leaving Malaysia.”

You had planned to fly into Kuala Lumpur, to cross into Singapore by land, take the ferry to Indonesia and then return to Malaysia several weeks later before traveling by bus into Thailand. Why would you need to purchase an onward plane ticket for that?, you think to yourself. You don’t plan on leaving Malaysia by plane.

After an unsuccessful attempt at wooing the airline agent, the visions in your head are now of a plane taking off without you. You even check your pockets to see if you have enough Australian money to get you back into Melbourne.

And then the airline agent offers a suggestion. “If you go over to the Qantas office at the other end of the terminal, you can buy an onward ticket and then hopefully get a refund once you arrive in Asia.”

Off you go, running across the terminal with your backpack dancing off one arm, and with only an hour and fifteen minutes to go until your flight to Malaysia is scheduled to depart. As you approach the small Qantas ticket office, you want to scream. The man behind the counter is in the midst of pulling down the shutters as the clock outside strikes 5:00pm.

You call out to this man and he immediately tells you that the office is now closed. And then you do the only thing that comes to mind. You beg him to listen to your situation. Twenty minutes later, you’re running back across the terminal building towards the check-in counter, this time with a $585 refundable airline ticket from Kuala Lumpur to Bangkok, held firmly in your hand.

The airline agent finally checks you in now that you have your onward ticket and without hesitation you rush off to immigration, through security and towards your gate, arriving with only a few minutes to spare. And as soon as you buckle your seat belt and settle into your window seat, you lean your head back, wipe the sweat from your forehead and take a deep breath. You’re on your way to Asia.

As you could have predicted, obtaining a refund for your fully refundable onward ticket was not exactly as straightforward as the Qantas ticket man had promised. On your second day in Kuala Lumpur, you trek across the city to the Qantas office, which is closed for no apparent reason. The following day, you go there again and even though it is open, a Qantas employee informs you that the refund process will require two more visits to their office during the following week.

Just thankful to be in Malaysia in the first place, you accept their seemingly unorganized system and plan your time in Kuala Lumpur around your necessary trips to the Qantas office. After your third visit, you’re finally informed that the process has been completed, but, and you just knew there would be a ‘but’, you will not see the refund on your credit card statement for 6-8 weeks.

At this point, you just don’t care. You know you’ll get that $585 back someday and now all you want is to forget about onward tickets and refunds and concentrate on the fascinating culture around you.

The Reality Of Onward Tickets

The above is a true story of course and one that happened to me exactly as I wrote it, about 7 years ago. Perhaps you’ve experienced the same thing, as dealing with the issue of onward flight tickets is something that many travelers face during their adventures.

If you spend a lot of time reading up on the visa/entry requirements for countries around the world (as I do), you’ll realize that a high percentage of countries do require visitors to have an onward ticket in order to be granted entry. However, this is a rule that is often not enforced by immigration officials.

In addition to Malaysia, I can remember being asked to show proof of an onward flight ticket in several countries, including Australia, Singapore, Jordan, New Zealand, Myanmar and the UK. So it definitely does happen and unfortunately, there is often no way to know ahead of time if the rule is going to be enforced. And this is a problem for any traveler whose travel plans are open-ended or mostly overland, and therefore doesn’t involve any onward flights.

In order to avoid a similar situation to the one in the Melbourne airport, I now make sure that I’m always prepared. But that doesn’t mean that I’m purchasing onward tickets all of the time. Instead, before I fly anywhere, I actually ‘create’ my onward tickets these days.

While some might think this is a bit ‘questionable’ of a trick, it is a workaround that saves me a great deal of hassle by eliminating the fear involved with hearing those dreaded words – ‘where’s your onward ticket?’ Here’s what to do:

*Alternatively, you could just sign in to Expedia or Travelocity, search for a flight and proceed all the way up until the ‘purchase’ stage. Then print out the final itinerary that displays on the screen and use that as your confirmation. I prefer the above method as it uses an actual paid confirmation format.

This a cropped version of what you end up with…if you click on the image you’ll get a clearer view. 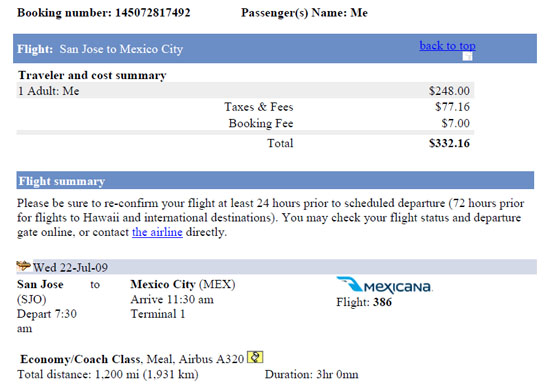 And then, when an airline check-in staff, or even an immigration officer, asks for proof of your onward ticket, simply hand over your confirmation and you’ll quickly be on your way.

Well, can I really guarantee the success of this trick? Nope. So you’ll have to use it at your own risk. However, it’s worked for me each and every time, although the number of occasions that I’ve actually needed to show this proof is tiny compared to the number of countries I’ve entered on a one-way ticket. You just never know.

You can also use a reliable service such as One Way Fly. For 19 EUR you can get a valid onward ticket, in your name, to the destination you choose and complete with a real booking number. This ticket will get you on the plane and through immigration and then it will expire once you arrive.

Have you ever run into any problems with not having an onward ticket during your travels? Anyone with different advice to share?