*After this post, I’m going to mix things up for the next couple of weeks in order to avoid what might be referred to as “Iraq Overload”. I’ll basically be alternating between posts on Iraq and posts on other topics instead of just writing about Iraq each time. But for now, the post below was written in response to several emails I received, and while short, I do hope that it sheds some light on where Kurdistan might be headed in the near future.

There is no shortage of optimism in Iraqi Kurdistan. Locals everywhere, from Dohuk to Erbil to Sulamainiyah, as well as in smaller villages such as Amediya, are eager to point out how calm and normal life currently is in this part of Iraq. There are smiles on the faces, laughter to be heard and a laid-back approach to life that seems to be embraced by everyone.

In every part of this region that I visited, I repeatedly had difficulty convincing myself that such real danger was never too far away. Life seemed too good, too comfortable, too optimistic everywhere I turned.

Now before I continue, I must admit that I probably interacted (in terms of actual conversations) less with the people of Kurdistan than I have with the people of almost any other country I’ve ever been to. The reason was not a lack of effort on my part, but simply the language barrier. My Kurdish is non-existent, my Arabic equally so and almost every time I informed a local that I spoke “Engrezie”, they would typically throw up their hands in defeat, implying that it would be impossible for us to communicate. Very few people speak even a small amount of English.

But of course, despite the language barrier, I did attempt to gather some information about this region, not from the internet or books, but from the actual locals who call Kurdistan home.

And I discovered that even though Kurdistan is so full of optimism, it appears that nobody knows what to do with all of that positive energy. It’s sort of a “Sweet. Now we have a semi-peaceful, semi-autonomous region, now what do we do?” kind of situation. Sure, foreign investment is pouring in, development projects are being completed and the quality of life seems to have improved greatly over the past 8 years or so.

However, as far as what the future holds, it’s anybody’s guess and maintaining this current level of stability and growth is nowhere close to being a guarantee. I really do believe (unfortunately) that this relative haven could become a more troubled region in a very short period of time.

Just look at the oil-rich city of Kirkuk. This city is claimed by both the Kurdistan government and the Iraqi government in Baghdad, neither of which wants to give up the chance to cash in on all the oil. And right now, it seems as if the only thing preventing an all out armed battle between the two sides is the presence of US soldiers in the region whose mission is to keep the peace. However, once the US withdraws its troops, the possibility for battle becomes an all too real possibility and if that were to take place, Kurdistan would easily be outmatched by the newly trained Iraqi military and their newly acquired weaponry.

So if Baghdad does decide to forcefully take control of Kirkuk once the Americans leave, this could instantly lead to severe instability and a much weakened Kurdistan.

In addition, if Turkish warplanes continue bombing the north of Kurdistan in their efforts to combat the PKK (Kurdistan Workers’ Party), a group which has been battling with Turkey for a long time, Kurdistan simply would not be able to fend off such attacks from all sides.

Of course, this is merely a possibility, albeit a serious one to consider, but such a situation could erase much of the impressive progress that has been made in this region over the past decade. 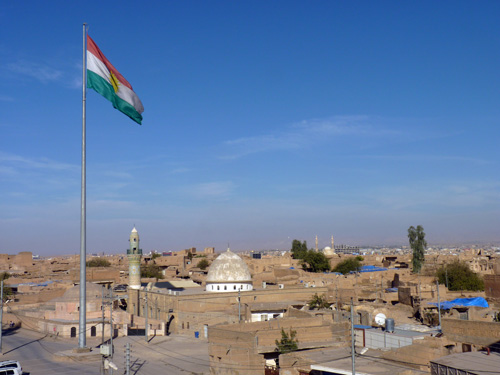 But this is also what’s so incredible about Kurdistan. Despite the possibility of such a situation taking place, you would never believe it if you traveled there today. The sun reflects off the windows of newly opened shopping malls, new cars fill the streets, birds chirp along with the Kurdish music played at tea stalls and the fountains in every landscaped park spray beautiful streams of water high into the sky. And the Kurdish people themselves, while aware of the fragility of their current situation, maintain their optimism at all times, not simply hoping for, but whole-heartedly believing in an even brighter future for their little corner of the world.

Here’s a short video I took of everyday life in the Kurdish town of Sulamainiyah (my apologies for the music at the start as I tried to get a little too fancy!):