The One Thing I Love To Do

The One Thing I Love To Do 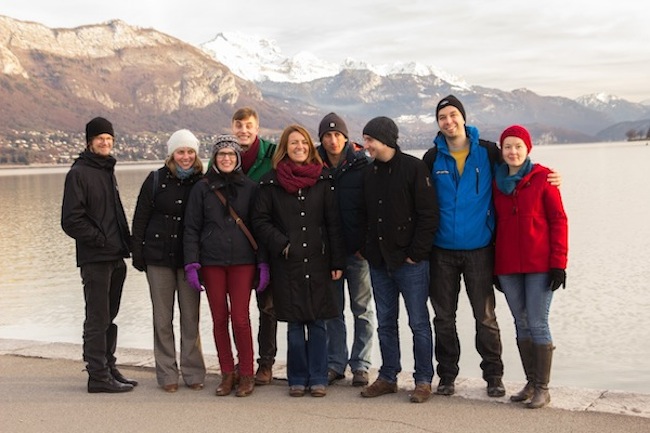 It’s the start of the year and I’ve been sitting here for awhile trying to come up with the perfect topic for my first blog post of 2014. And I’m a bit worried because the idea that has so far stood out as much better than all the rest involves me showing you a video of my slightly webbed toes.

Oh heck, let’s see how it goes. Here, my friends, is a video of my slightly webbed toes, aka “duck feet”:

(If you’re reading this post via email, you’ll need to click here in order to watch the video directly on the blog itself.)

The most likely reason why I have such a lack of ideas at the moment is the amount of travel I’ve done in the past two months and the exhaustion that the constant moving around has led to. And now that I’m back in Bucharest, finally able to rest, my brain has shut down somewhat, refusing to do too much thinking until it has a chance to adjust to one time zone and get into a normal rhythm.

Hence the reason why my mushy brain is unable to come up with anything better than a webbed toes video.

Of course, I could just go the more traditional route and write about my New Year’s resolutions for my first post of 2014, but the problem is that I don’t have any New Year’s resolutions. I’ve always believed that if there is something I want to do in life, the best time to start is immediately. Waiting for the New Year to come around to make changes in my life doesn’t seem like a good idea to me. The longer I wait to start something, the less of a chance there is of me actually following through.

So there won’t be any resolutions from me.

On the other hand, and this has nothing to do with it being the start of the year, I have had something on my mind lately, something that I definitely want to accomplish more of in the coming months. And no, it does not involve participating in swimming events so that I can take advantage of my webbed toes.

It’s actually much simpler than that.

It is true that I meet a lot of people already, that’s for sure. But I must admit that the amount of random people I meet has become less and less lately. I’m talking about striking up conversations with waiters and waitresses, shopkeepers and bakers, bus drivers and police officers, soldiers and tailors, students and retirees, entrepreneurs and any other stranger I come across, everywhere I go, with the sole purpose of exchanging stories, learning from each other and creating as many human connections as I possibly can.

That’s what I love to do. That’s why I’m traveling in the first place. So now it’s up to me to make sure I’m on track and still doing what I love.

If you read this blog, you’ll already know how much I believe in the benefits of human interaction, especially cross-cultural interaction, in terms of breaking down barriers and misunderstandings that could potentially, and needlessly, lead to hatred, discrimination, war and more. And all it takes at times is saying “hello” to a person standing next to you on the metro or smiling at the person you pass in the street or asking a question to the person at the next table. The effort required to connect with a fellow human being is so minimal, yet the potential benefits are huge, for everyone involved.

With that said, I do know very well that closing my laptop right now, heading outside and talking to random people won’t exactly “change the world”. It won’t put an end to any wars, violence or widespread hatred. I’d be foolish to think it would.

But, but, but…such an interaction can change a person’s day, it can change someone’s week, it can bring happiness, it can alter someone’s views, it can create friendships and teach us life lessons and so much more. Even if the only result of interacting with a stranger is an exchange of smiles, I personally feel that makes the brief connection more than worthwhile. Such an interaction certainly brings me more happiness than just about anything else in life.

That’s why it’s time for me to focus on meeting more people wherever I go, as of this very moment. I’m genuinely excited about where this will lead, who I will meet and what I will learn as a result.

And this way, I will also be able to promise that the next video I put on this site will highlight one of these interesting random interactions from my travels, something that sounds so much better than my other idea – a video of me cutting my toenails.

Do you talk to random people when you travel? How do you benefit from random human interactions? Any particular goals you have set for yourself right now?