It’s Okay To Be A Non-Digital Nomad

It’s Okay To Be A Non-Digital Nomad 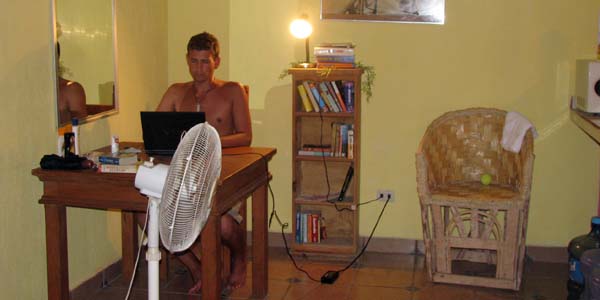 Yes, I know. I am indeed a Digital Nomad myself. It is true that the majority of my income these days is earned online and without my laptop, I simply wouldn’t be able to maintain my nomadic lifestyle.

Of course, that probably doesn’t come as much of a surprise to most of you, because, after all, if you spend even just a few minutes reading a handful of the travel and lifestyle design blogs out there, it would be natural to reach the conclusion that the only way to become a nomad these days is to become a digital version of one.

It seems at times that everyone who is traveling or living overseas is earning money on the internet, and as soon as your own mind becomes filled with visions of bank accounts overflowing from a never-ending stream of passive income, it is understandable why you would want to try and create your own digital empire as well.

Believe me, I’ll be the first to admit that earning money online (especially passive income) is simply fantastic. In fact, I can clearly recall the day that I sold my first eBook. That day was an absolute hoot. I was living in Melbourne, Australia at the time, back in 2008, and when I checked my email that morning, I found a sales notification message in my inbox. I stared at this email for a long time, finding it difficult to believe that this wasn’t some kind of trick. For the rest of the day, I honestly couldn’t stop smiling.

“It works! It works!” I yelled out as I ran around the house. “Earning money online works!”

But what is important to realize is that it took me more than 5 months to get that first sale, 5 months of 90-hour workweeks in front of my laptop. And that first sale, while a step in the right direction, was no guarantee at all of future success. It took me another 5 months to start seeing regular sales notifications appear in my inbox, and by ‘regular’, I mean 3 or 4 per week. While that may sound like a success, this resulted in me earning approximately $250 US per month, despite having slaved away for 300 straight days. This amount clearly wasn’t enough for me to survive on as a nomad.

So, ever since 2008, I’ve continued to work hard, working at all hours of the day and night, usually six or seven days per week, whether on the road in the Middle East, Asia or Australia or while living here in Mexico.

And while it is true that my efforts are now paying off, as I do earn enough online income to support my nomadic lifestyle, there is still little time available for me to rest if I want to maintain that income. As I think most Digital Nomads would agree, the income we earn is never guaranteed and what we earn one month is not necessarily an indication of what we’ll earn the next.

In fact, two consecutive months could be so drastically different from each other in terms of income that one moment you may be ready to move to the Turkish coast for a year and the next minute you’re wondering if you have enough money to replace your worn-out sandals.

Such is the life of a nomad.

Actually, such is the life of a Digital Nomad.

And while becoming a Digital Nomad certainly has its benefits, it really is important for every single person who is dreaming of a life of travel to understand that you also have another attractive option available to you.

You can always become a non-Digital Nomad.

I’m personally not a fan at all of the term ‘Digital Nomad’, despite being one myself. The term is so widely used these days that the word ‘Digital’ seems to be inseparable from the word ‘Nomad’. In reality, that’s not the case at all.

I’ve only been earning money online for the past 2 years. Prior to that, I still managed to travel around the world for 9 years, all on money I earned non-digitally.

I taught English, I worked on board cruise ships and I worked a few odd jobs here and there in order to save up some more money to travel. And while I may have earned much less at times than what I’m earning now online, I must admit that I enjoyed a handful of benefits from my non-digital work that I miss out on these days. I’ve actually begun to miss these benefits so much that I’ve now started working on some non-digital projects once again.

THE BENEFITS OF GOING NON-DIGITAL

As I repeatedly state on this website, the core goal of my lifestyle revolves around my desire to meet and interact with new people as often as possible, people that I would never have met had I not been traveling. Unfortunately, going digital and sitting in front of my computer every day has not really helped me achieve that goal at all. Sometimes I need to remind myself to get outside and have a social life!

On the other hand, working away from my computer, on projects that require me to interact, face-to-face, with other human beings, is infinitely more rewarding in this respect.

For example, I’ve recently become involved with a small business here in Mexico, a position which has required me to wander around from government office to government office, from the offices of architects to the offices of accountants as well as to cafes and other locations to attend meetings. As a result, I’m interacting with new people almost every day. I’m also practicing my Spanish more than ever and I’m constantly learning something new about Mexican culture… and my social life is alive and well. What a better alternative to being online all day!

In addition, financially speaking, it’s also important to remember that, as a Digital Nomad, you could spend weeks or months working on a new project and end up earning zero dollars as a result. I’ve had several online ideas that turned into complete failures (most Digital Nomads do) and I cringe at the the thought of all the months I’ve spent on my laptop only to scrap these ideas in the end.

On the other hand, as a non-Digital Nomad, you have a chance to earn money for the work you perform by getting a job overseas, never having to worry if next month’s paycheck will be lower than this month’s or whether or not there will even be a paycheck at all.

I know that the concept of earning an excellent income online (which is infinitely more difficult to accomplish than most people ever imagine) is drool-inducing and appealing enough to get anyone giddy about building websites, but instead of spending the next 12 or 18 months trying to achieve such a goal, I recommend starting your travels right now.

What happens if, at the end of your 18 month online income experiment, you have managed to earn only a trickle of money or maybe no money at all? You might then decide to abandon your travel plans altogether, something that I have seen happen over and over again with people who are tricked into believing that being a Digital Nomad is the only way to achieve their travel goals.

Teach English, work on board cruise ships, work in a hostel or a bar or even on an organic farm in exchange for all of your room and board. Do you have a degree? Well, start applying for jobs overseas. Contrary to what you may have read, actual jobs are not evil! After all, if you’ve just spent 4 years at university, why not look for a job in a different country that requires the very skills you have? Many people take this path and it’s an excellent way to start your life of travel without having to worry about where the money is going to come from.

Better yet, use your creativity. I once read a story about a young traveler who earned an impressive income by promoting a certain boat tour operator to newly arrived backpackers in a popular Central American town. She earned a small base salary plus a generous commission for every person that signed up for the tour and was so successful that she implemented her business model in several other countries as well.

Why not? Just writing about it makes me want to close the lid of my laptop, travel to Nicaragua and do the same thing she did myself!

But maybe you still can’t get the idea of being a Digital Nomad out of your head. Well, once you’re out there, traveling and living overseas, and putting some non-digitally earned money in your pocket, that’s the time to start working on generating online income. This way, you won’t have to worry about abandoning your travel plans if those efforts don’t pay off.

And the best part is that if you don’t want to try and earn an online income, then that’s perfectly acceptable as well.

Remember, don’t let anyone convince you that being a Digital Nomad is your only option.

Not only is it okay to be a non-Digital Nomad, it is usually the most reliable, direct and sane path available to help you live that life of travel that you’ve been dreaming about.