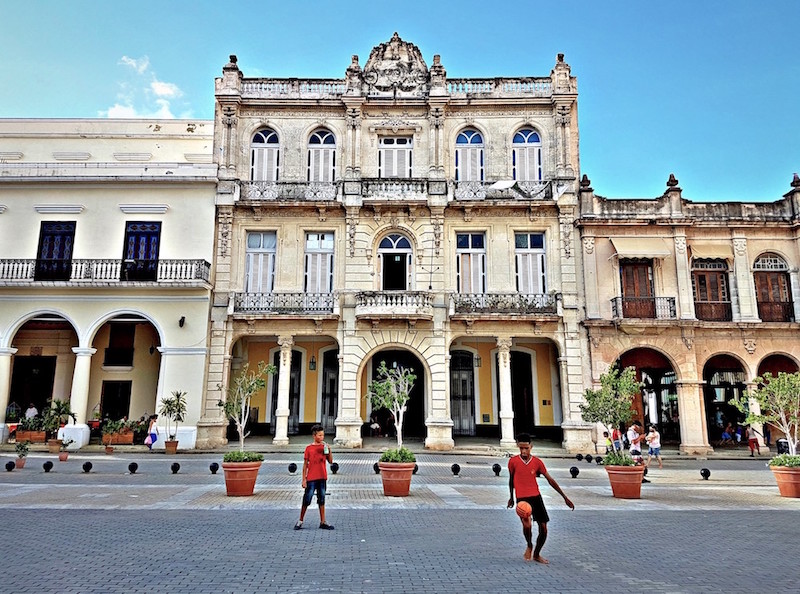 Less than five minutes after we walked onto the streets of Havana for the very first time, my friends and I were strolling along the sidewalk when a man clad in a bright yellow t-shirt, carrying two large canvas bags, called out to us. Before I knew it, I was helping this jolly fellow carry one of those heavy bags while engaging in some conversation with him. Suddenly, he stopped walking, we put the bags down and he pulled out a bottle of rum. He poured some into a plastic cup and handed it to me, and then he poured one for himself. We both said “Salud!”, he followed up with a “Bienvenidos a Cuba!” and we each threw back our shots. Then we simply shook hands, smiled and nodded to each other and went our own ways. My trip to Cuba had begun.

Even though our flight landed in Havana at 3:45pm, and my friends and I didn’t get to the guesthouse until 5:30pm, my first day in Cuba was indeed eventful, fascinating and bizarre nonetheless.

We ended up walking 14 kilometers during that first evening and night, all over the Vedado neighborhood, all along the coast, all through Old Havana and who knows where else.

The sunset that we watched from the Malecon was superb in every way. As we sat on the seawall, the sun melted into the horizon, providing a brilliant welcome show. It was one of those sunsets that also melts your heart, transports you to a different place, a so very peaceful place, so very far from your troubles and struggles. You can only stare straight ahead and feel the quiet inside, lean on something or someone, and remain in that far off land for as long as you possibly can.

During our 14 kilometer wander, I interacted with vendors, taxi drivers, rickshaw drivers, waiters, shopkeepers, people in the streets. At one point, I accidentally pulled out a large wad of cash from my pocket, in front of a small shop, on a very dark street, at 10pm, with a group of observant young men behind me. They pointed, they laughed, they inched closer, they whispered among themselves and I tensed up…and then…they told us to watch the bottle of rum we were buying because it was about to fall off the counter. And they chatted with my friend. All was fine, we said goodbye and walked away.

A huge muscular man ran by us on the sidewalk, wearing a tight black leotard-like running outfit, with his small dog in tow. A moment later, a prostitute high on something, stumbled by. Drunk men sang out loud in front of the sea, taxi drivers honked their horns at us, teenagers walked by hand in hand.

There weren’t large crowds of people anywhere, yet there were small groups here and there and a scattering of people popping up in the most random places, moving with seemingly no order, yet with a steady rhythm nonetheless. One lady appeared in front of me after she had climbed over a fence, a man crossed the street in a slow jog, a few people danced to some loud music under a tree, a guy sitting on the stoop of a dilapidated building asked if we wanted to learn salsa, a woman stood in her doorway wiping the sweat from her forehead with a white towel.

Old cars zoomed around the corners, 50 and 60 year-old Chevys and Fords and Ladas, the kind I knew existed here in Cuba but that my brain was not able to fully believe until I saw them with my own eyes, right there on the streets before me. On this first day I saw more of these classic cars than I have seen in my entire life, some of which looked like they just came out of the factory yesterday, many looking like they’ve been patched up thousands of times. Was it cool? Indeed. Was it odd to realize that they are stuck with these ancient, beat-up vehicles because people have no other options? Absolutely. 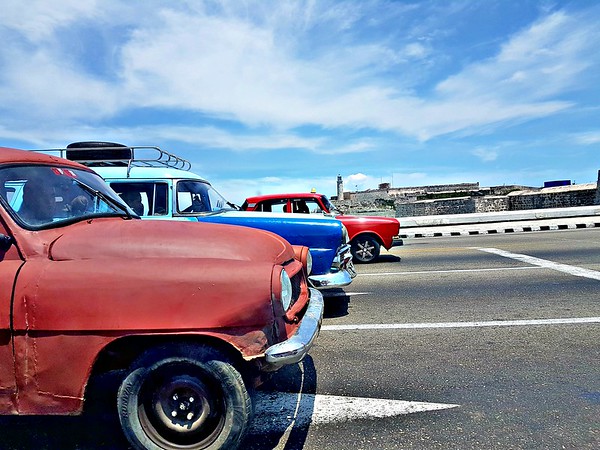 Shockingly, in this land where internet is supposedly so scarce, we passed three public wifi areas, where dozens of people were checking the internet on their phones, during the one and a half hours it took us to find a shop selling bottled water. We could barely find any shops at all. And while we didn’t check the internet on this night, we quickly realized that getting online wouldn’t be as difficult as we had imagined on this trip. Finding water would be more difficult than we imagined and we quickly understood that if we passed a shop selling it, that was the time to stock up with as much as we could carry.

The colors, the architecture, the bad-assery, the odd glances, the consistent attempts at scams, the long search for a place to eat, the peaking into the homes through the open doors and windows, the shops selling eggs, the shops selling nothing but beer and rum…the feeling that everything around me was truly stuck in time in a way that I never thought I would actually witness, despite everything I had heard about Cuba.

Around every corner, in every direction I sent my eyes, I really was stuck at times. I could not interpret, I could not make much sense of my surroundings. It made me question, it made me think. It made me dream, it made me smile, it made me sad. It made me thankful. And I fully loved and appreciated every minute of the experience at the same time, in more ways than I could ever describe.

Actually, this is what travel does if you let it. And in my opinion, you really should let it. It takes your head and knocks it around a good amount, it determinedly makes sure everything you thought about how the world works suddenly doesn’t seem so certain. Travel breaks you, it overjoys you, it makes you dizzy and drunk and tearful and fascinated and it offers, without warning, endless new ideas and perspectives that you must ponder and deal with, in the raw.

And if you can’t handle that, long-term travel probably isn’t for you. I love it personally, I’m addicted in fact. A trip to Cuba, a trip anywhere…it’s why I’m still bouncing around.

So, that first night in Havana…eventually, we found a restaurant and we had a decent meal. Eventually, a shop was found too, one that sold bottled water and rum, both of which we purchased. And eventually, tired from the long, long day of flying and wandering, a taxi was hailed and back to our guesthouse we went.

Just as the day had started, with that shot of rum, we naturally soon found ourselves ending the day by sipping some more of the same. And then, once our glasses were empty, off to sleep we went, day one in Cuba complete.

Have you been to a destination that left you confused? Where? Does travel often force you to reevaluate your ideas and beliefs?