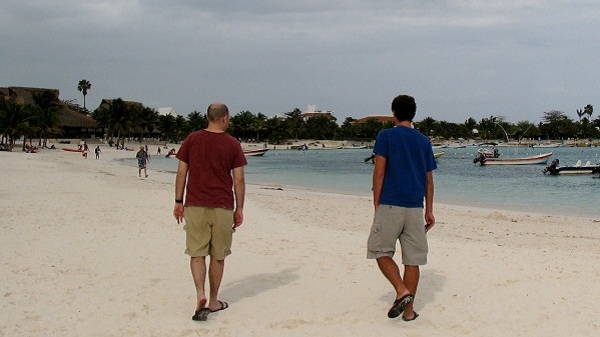 Anyone who has spent even a short amount of time traveling would certainly be familiar with the ‘travel date’. This is when we actively seek out another traveler to spend time with despite knowing that we will end up having the exact same conversation, one that revolves around a very typical set of questions, that we’ve had thousands of times before.

However, it is important to point out that there are some key differences between the ‘travel date’ and normal dating.

First, instead of love, travelers are often just looking for someone to hang out with for the day. Second, instead of having the luxury of sifting through thousands and thousands of online profiles hoping to find a good match, we travelers must use a different method to find our companions. We must sit in the hostel lounge, pretending to read a book, as we scan the room out of the corner of our eye, looking for someone that appears interesting and with whom we think we could handle an afternoon of sightseeing or a quick meal.

While there are certainly plenty of days when we travelers are perfectly fine with being on our own, it would be foolish not to admit that there are even more days when we prefer the company of others. Visiting the famous fortress in town or going down to the beach is often a much better experience when we have someone there to talk to and so we spend some time scoping out our fellow travelers in the hostel, eavesdropping on their conversations, just waiting for the right moment when we can suddenly interrupt and say, “Oh, you were in Indonesia last year as well? Sumatra was also my favorite island!”

Maybe we are welcomed into the conversation, maybe we are politely ignored. But if we are welcomed in, it feels great. The other person is interested in hanging out as well! It must be how my friends feel when they actually receive a response from someone they contacted through an online dating site.

From this point on, things usually become much easier. All we have to do now is wait for the other person to say something like, “I was going to walk over to the castle today” or “I heard about a cool pub in town” and then we can respond with, “Me too!”. And just like that, we have a ‘date’.

Of course, these are not dates in the traditional sense. But as you head out the door of the hostel a few minutes later, and those typical traveler questions begin to be asked, it certainly feels like a date nonetheless. 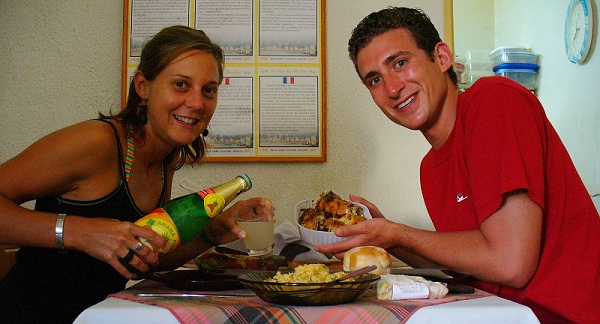 Usually, we have many travelers to choose from when we’re looking for someone to spend the day with, but there is always a chance that we end up somewhere that doesn’t offer us much of a choice, such as when it’s the low tourist season and there are only a few other people staying at the hostel. I imagine that such a situation would be similar to living in a town of 1,000 people in the middle of nowhere. When you’re really in the mood for some companionship, you just have to shrug your shoulders and accept whomever happens to be around.

And last week, this is exactly what happened to me during my stay at the Hostel Mostel in Veliko Tarnovo, Bulgaria. On my first night, there were only two people staying at the hostel, myself and a German fellow. The next morning, the German took off in his car to go to a football match in a nearby town, leaving me all alone (the nerve of him!).

So I sat down in the hostel lounge, turned on my laptop and decided to respond to some emails. After about an hour, and just as I started to feel hungry, the door to the hostel suddenly opened, and in walked another traveler. Out of the corner of my eye, I watched as this guy checked in, put his backpack in the dorm room and then seemed to ask the hostel staff where he could find a good restaurant for lunch.

Upon hearing the word ‘lunch’, I turned off my laptop, jumped out of my seat and made my move, probably looking more desperate for a friend to eat with than I would have liked. I practically sprinted over to this guy, informing him that coincidentally, I, too, was hungry and about to go eat. So I asked him if he wanted to eat together.

Well, that’s pretty much how I ended up on a ‘travel date’ with Kaji, a 22-year old Japanese graduate student who spoke no more than twenty words of English. In fact, his English was so limited that I don’t even think he knew what I was saying when I invited him to join me for lunch.

He was probably scared of me, the strange guy who started babbling nonsense to him three minutes after he walked into the hostel. I wouldn’t be surprised if he followed me only out of fear.

But even so, the ‘date’ did seem to start off quite decently. Sitting on the terrace at the Ego Restaurant in the center of Veliko Tarnovo, eating pizza and drinking mugs of Zagorka beer, we eventually managed to communicate enough to ask and answer the usual questions – Where are you traveling? How long have you been traveling? What is your favorite country?

Unfortunately though, as soon as these were out of the way and we moved on to the next level of questions, we really started struggling.

Kaji asked me if I like music. I replied, “Yes.”
I asked him if he smoked cigarettes (no idea why this question came to mind). He said, “Yes.” Then he said, “No.” Then he said, “Yes” again.
Kaji asked me what I do for work. I said, “Blog computer stuff.”
I asked Kaji what he was studying. He said, “Chemistry.”
Kaji pointed out that I had spilled some pizza sauce on my shirt.
Ten minutes passed in silence.
I asked Kaji if he had any brothers or sisters. He didn’t say anything, not understanding my question.
Ten more minutes passed in silence.
Kaji told me he liked my titanium money clip.
I told Kaji that I love eating Okonomiyaki.
Kaji went to the restroom.
I tried to think of more questions.

On and on we went like this for about an hour and a half, with the conversation never really flowing too smoothly. It was still a pleasant afternoon in the end as Kaji was a really nice guy and I was certainly happy to not be eating alone, but once we finished our food and we paid the bill, as is often the case with real dating, it was obvious that our relationship was not going to continue beyond this one meal.

We simply shook hands, thanked each other for the company and went off in opposite directions, two travelers wandering the streets alone once again, each hoping the next ‘travel date’ they have out there in the world will prove to be more successful.

Are you familiar with the above type of traveler interaction? Have you had any awkward ‘travel dates’?