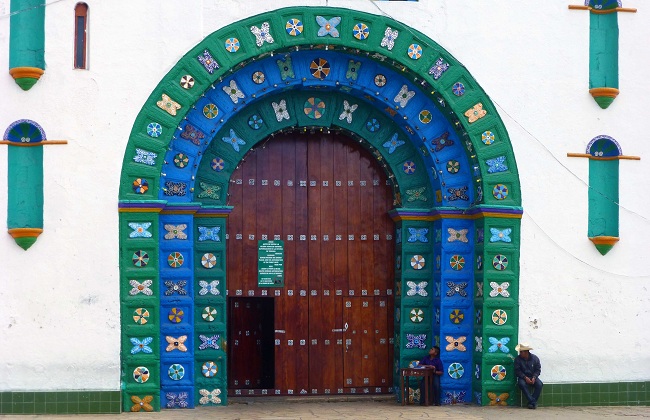 Yesterday, our Wander Across Mexico group visited the town of San Juan Chamula, a community of 95,000 Tstozil Mayans that lies approximately ten kilometers away from San Cristobal de las Casas. And during that visit, yes, we entered what I can only describe as the most amazing church I’ve seen in all my travels.

Let me give you a little background…

The Tsotzil Mayans live in their own autonomous region in the Mexican state of Chiapas, a region that Mexican police and military are not allowed to enter. These Mayans, in order to maintain their culture and traditions, have extremely strict rules and practices and when any member of the community rebels or doesn’t adhere to these cultural rules, they are expelled, simple as that.

In addition, the Tsotzil believe that when you take a photograph of someone, their soul is taken away and so, visitors to the town are generally not allowed to take photographs directly of people, especially any civil or religious leaders. If the local police, who walk around wearing white fur ponchos and holding long black sticks, catch you taking a photograph of something they don’t want to be photographed, the punishment can range from a verbal reprimand to having your camera confiscated or even being fined or tossed in the local jail.

And the most sure-fire way to end up in that jail would be to take photographs inside the town’s one church, the Church of San Juan, a simple-looking church that sits at one end of the main square. This church is the center of Tsotzil life as this is where every member of the community practices their unique religion, which is an intriguing mix of traditional Mayan customs and Spanish Catholicism.

Photography is strictly prohibited in this building, simply because, as you’re about to find out below, what actually takes place inside the sole church in this community is unlike anything else you will ever see in any church on the planet… 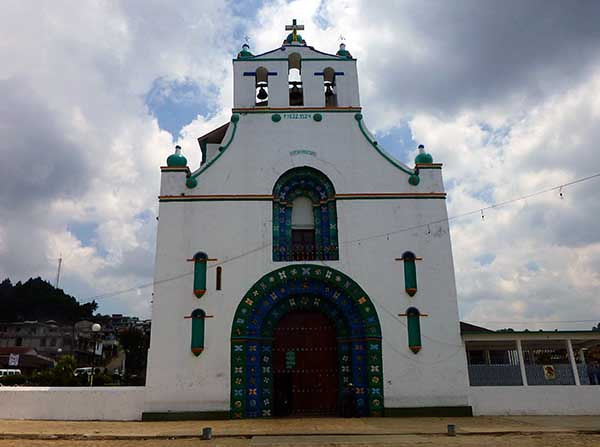 Inside the Church of San Juan

I can only try to explain what I saw as best I can. But believe me, you really need to see this place for yourself (as is the case with most things) in order to truly appreciate it.

The church has no priest. It is open 24 hours per day. Members of the Tsotzil community can enter at any time. When they do visit the church, they walk through the large hall, which has no pews, and they find an empty spot on the floor, which is completely covered in fresh pine leaves. The Tsotzil then set up a variety of candles in front of them, candles of different colors that each represent a specific type of problem that they need to be solved. When we visited, some people had a few candles in front of them and others had almost one hundred, creating a scene in which there were well over 5,000 candles in total burning inside this church.

Once the candles are lit, the Tsotzil pray, in their local Tsotzil language, to one of the dozens of Catholic saints whose statues line the sides of the main hall, or to the large statue of John the Baptist encased in glass at the far end of the room. Sometimes they pray for a few minutes, other times for hours on end. They are free to remain inside for as long as they wish until all of their issues are dealt with.

Once they have finished their prayers, and especially when they are suffering from a more serious problem, the Tsotzil consult one of the medicine men or medicine women who are wandering around the inside of the church. The shaman comes over, lifts up a live chicken (which the praying Tsotzil had brought with them) and rubs the chicken against the afflicted person or persons. Every now and then the shaman checks the person’s pulse until they determine, through the pulse somehow, that the problem they are praying about has been transferred to the soul of the chicken.

Then, the Tsotzil takes the chicken and wrings its neck so that the problem disappears forever.

Finally, the newly ‘freed’ individual or individuals take a giant shot of ‘posh’, a local sugar-cane based liquor, and often a long swig of Coca-Cola as well, until they begin to burp. Once they burp, they believe that they have been fully cleansed of the evil that had been haunting them, allowing them to end their prayer session and head back outside.

Now, in summary, just imagine an entire church hall, eerily lit and full of Catholic saint statues and thousands of burning multicolored candles on the floor, with dozens of traditionally-dressed Tsotzil families, couples and individuals sitting on a layer of pine needles, praying on their knees, chanting in ancient tongue, drinking homemade booze, burping out loud and killing chickens.

The scene was fascinating and I am certain that every single member of our group could have stayed inside watching it for a long, long time. I have never seen anything like it and I’m not sure if I ever will.

Again, taking photographs inside this church is completely prohibited and so I have no real proof to back up the above. However, if you ever travel to the state of Chiapas, Mexico, or more specifically, to the town of San Cristobal de las Casas, you absolutely must venture over to San Juan Chamula so that you can also experience this community for yourself.

Only then will the above actually seem real.

Have you been to San Juan Chamula? What do you think about their unique religious practices?