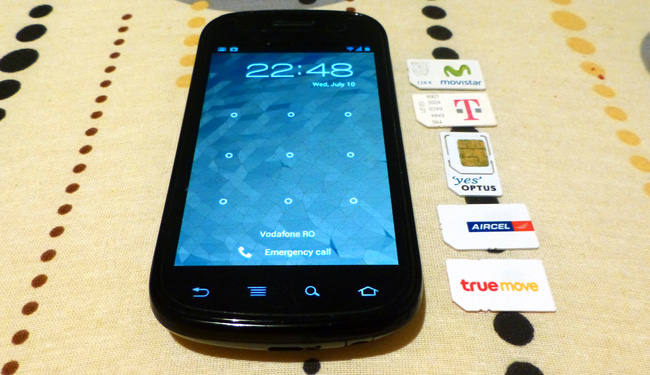 You arrive in Rome. You call your friend to have him pick you up from the airport. You talk for ten minutes. You still can’t find him, so you call again. Ten more minutes later, you finally understand where he’s telling you to meet. = $20 USD

You have a few drinks while partying on the beach in Thailand. You decide to start texting that guy/girl you met in Bangkok last week. You exchange twenty texts. The next night, you do the same. You also send a bunch of texts to friends back home. = $14 USD

You suddenly need to get to Granada, Nicaragua but you can’t figure out the bus schedule from San Jose, Costa Rica. You call the bus station several times to no avail before calling a friend of a friend living in Costa Rica for advice. Since it’s last minute, you call several guesthouses in Granada until you find one with an available room at a price you like. You’ve spent forty minutes on the phone. = $60 USD
(*Based on current international rates from AT&T)

Unfortunately, many people pay these incredible amounts of money to use their mobile phones while traveling simply because at first, it often seems that using an international roaming plan from your home country is the only option. And while it might be the easiest option (often, all you need to do is go online and activate the additional plan), it’s an option that really has very few, if any, other benefits.

And that’s why I’ve never used that option myself.

Here’s a rundown of how I use my mobile phone as I travel around the world:

Why Is This The Best Solution For Me?

First, it’s the cheapest. Here in Romania, for example, I have a SIM card with Vodafone and I spend about 30 RON ($8 USD) per month and that’s enough for text messages, phone calls and the occasional checking of email. I’m not exactly a socialite, chatting away on the phone and texting all day, every day, but for minimal to normal use, that’s all it costs me.

Also, it is easy to think that the reason you want to have phone service while traveling is to stay in touch with friends and family back home. However, I just use Skype or Google Voice for that. What you really need your phone for is to get in touch with locals you meet, to make accommodation reservations, to call the bus station to find out when the bus really leaves and to have a local number so that others can contact you within that country.

Having a local phone number (with a local SIM card comes a local telephone number!) makes life a bit easier as you can now reach and be reached by anyone in that country.   And like I mentioned, whenever I want to call home, I just find a place with Wi-Fi, turn on the Skype app on my phone or fire up my laptop, and call home. Or I send a text message home, something that doesn’t cost much at all with my Romanian SIM Card (about 50 cents).

In addition, I can use my Romanian SIM card all over Europe and the international surcharges are not too bad at all. In fact, I end paying much less than what mobile phone companies in the USA, or say, Australia, charge their customers to use their phones overseas. And to make it even better, as of July 1st, 2014, it will be illegal for mobile phone networks in the European Union to even charge any roaming fees at all. So once that happens, whether I’m in Romania, Germany, France or anywhere else in the EU, my rate for voice calls, text messages and data will remain the same as what I pay in Romania. Sweet!

Even though I’ve been using Romania and Europe as an example above, the same idea applies to many other regions of the world too.

When in Mexico, I use a local Movistar prepaid SIM card and not only does this give me very low rates around Mexico, but calls and text messages to the US and Canada are charged at the same low rates as well. There are no international surcharges at all for calling/texting those two countries. And when I lived/traveled in Mexico, I was putting about $30 USD of credit on my phone per month and I used my phone all the time, making it a great deal.

When in India, I use Aircel. When in Thailand, I use TrueMove. When in Australia, I use Optus. Together, these local prepaid SIM cards have allowed me to use my phone while traveling without spending a ton of money.

Using local SIM cards is also much easier to set up than many people think. It’s not a hassle in most parts of the world at all and the entire process typically takes less than five minutes. (Some regions, such as certain states in India, do make it more difficult for foreigners to get a local SIM card but such places are the exception I’d say.)

Once you settle on a mobile network provider (see below), you just ask for a prepaid SIM card and hand over some money, as it generally costs around $3 – $15 USD for the SIM card itself. You then place the SIM card into your phone and the staff behind the desk will type away on their computer for a moment. And within a couple of minutes you’ll usually receive a text message stating that your SIM card has been activated. Done deal.

How To Choose A Local SIM Card

It’s all about research. Ask locals and ask other travelers who have been to the country you plan to visit yourself. Look around online and find out which mobile network companies appear to be the most reliable while offering attractive rates. Keep your eye out for promotions as well because such special deals seem to be offered all the time in many countries. Sometimes all it takes is asking the staff working in the mobile phone shop what deals they currently have available.

You may find that if you add $10 of credit, you get another $10 of credit for free. Or maybe there is a monthly special going on where you get an additional 100 MB of data at no extra cost. Who knows? It could be anything and I’ve seen excellent deals of all sorts all over the world. All you have to do is ask!

Keep in mind though that while it might seem tempting at times to get a SIM card from a smaller, lesser-known mobile network company that is offering rates lower than the bigger competitors, that’s not always a good idea. You want a network that is widespread and reliable and usually, the bigger the company, the more widespread their network of course. This will help ensure that you have a signal as much as possible and that the connection will be strong. Cheaper isn’t always better, especially when the differences in amount for things such as prepaid calling and texting rates are usually not too much.

By using local SIM cards, and Skype, everywhere I go, I estimate that my monthly mobile phone expense is about $25 USD. And this includes all the phone calls, text messages and data that I need. Admittedly, I don’t connect to the internet too much through my phone, simply because I spend so much time on my laptop that when I’m away from my computer, the last thing I want to do is constantly be checking my emails. That’s just what I prefer, and as a result, I can travel the world while always having a local phone number and always having a way to get in touch with people in the countries I visit, all for a tiny, tiny fraction of what it would cost if I used an international roaming service from a mobile network provider back in the US.

*Note: In order to use different SIM cards from around the world, you do need to have an ‘unlocked’ phone that operates on the GSM network. You can either purchase a fully unlocked phone through a website such as Amazon.com or, if you bought your phone through a mobile network provider in your home country, you can have them unlock your phone for you. The two companies in the US that operate on the GSM network, T-Mobile and AT&T, offer this service. Without an unlocked GSM phone, you won’t be able to connect to another network and therefore, buying local SIM cards wouldn’t be an option.

How do you handle your mobile phone while traveling? Have you found any particularly good deals out there? Any questions about traveling with your phone?