Mexico’s Cenotes: Located In My Backyard

Mexico’s Cenotes: Located In My Backyard

What does a person do when standing at the edge of a frigid pool of water, watching their friends jump, one after the other into that very pool? And what happens when these ‘friends’ begin yelling out insults once they surface, taunting the only person not willing to take the plunge?

Last week, I was that person as I stood, for a long time, at the edge of Cenote Eden, unwilling to budge.

If you’re not familiar with a cenote, they are basically sinkholes filled with groundwater that are connected to larger bodies of water that lie deep underground. They come in several forms including large open pools, small pools half-covered by a rocky roof and even massive underground cave systems full of stalagmites and stalactites.

And it just so happens to be that, stretching both north and south from Playa del Carmen, Mexico, lies an area full of these cenotes. Some are located only a short distance from the edge of the road and others require a 30 minute drive through the jungle along a bumpy dirt path in order to find them.

Here’s another photo of a cenote to give you a better idea: 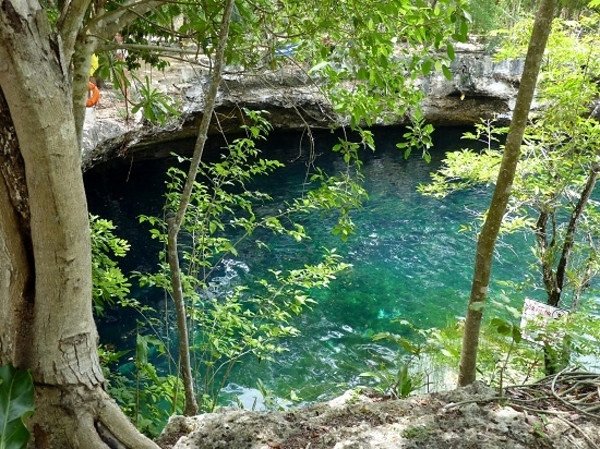 So, back to the story. What did I do upon hearing the insults of my friends as I stood there at the water’s edge of Cenote Eden?

After a lengthy internal debate about whether or not to join the others, a debate in which I determined that jumping into an active volcano crater seemed infinitely more appealing to me (unfortunately there was no active volcano nearby), I eventually took five large steps back away from the edge followed by an uncomfortably deep breath. And then, after counting to three, I ran towards the water…

Upon reaching the edge I closed my eyes, lifted my arms into the air and then…I stopped running, sat down on the ground, dangled my feet in the water for a few minutes and finally began the torturous process of lowering myself ever so gently into the icy pool.

When it comes to cold water – and by ‘cold’ I am referring to any water with a temperature less than 80 F / 27 C – I normally stay away, far away. My body simply can’t handle it. It’s not only unenjoyable, it’s actually painful for me to be swimming around while shivering and convulsing as my body tries to figure out how to handle the sensation of cold.

However, on this particular day, it didn’t take long for me to realize that this was a unique occasion. Turning down an opportunity to swim in one of Mexico’s cenotes would simply be foolish, especially when everyone else in the group was happily jumping in the water, swimming through the caves, admiring the marine life that swam around them and continuing to throw insults in my direction.

Eventually, into the water I went.

And yes, I survived.

For anyone who has visited a cenote, I’m confident you will agree that the experience can really be quite therapeutic. In what way exactly, I’m not too sure, but there’s no denying that the clean, calm, crystal-clear waters and the typically wild jungle settings of these sinkholes and caves lead visitors into a most peaceful state of mind. I certainly felt this peacefulness, even if for only a brief moment and despite what I swear were icicles forming on the end of my nose. (My friends told me it was just a leaf but what do they know?)

It turned out to be this peaceful state of mind that I felt while shivering in the waters of Cenote Eden that convinced me to also go for a swim at Cenote Dos Ojos (Two Eyes), the second cenote we visited that day. And, if you can believe this, not only did I also take a dip in the cavernous cenote known as El Cristalino (The Crystal) later that afternoon, I even took a running start and leaped right in.

Surprisingly, that wasn’t so painful after all. I wasn’t about to jump in again but I’m glad I did it that once.

So with that said, I hope this post may act as further evidence that there is even more to Playa del Carmen than hotels, tourist bars, good Wi-fi, divine tostadas and the white sand beaches that act as this town’s front yard. Now you know about the dozens upon dozens of cenotes waiting to be explored that fill the backyard as well.

Here’s a few more photos from my day out at the cenotes:

Have you been to any cenotes in Mexico? Anyone else out there who absolutely cannot stand swimming in cold water?