Mexico: Secrets from a Cesspool

Mexico: Secrets from a Cesspool

It’s really just one giant cesspool of a travel destination if you ask me. That is why I urge you, every single one of you, to stay away…as far away as you possibly can. I’m saying this because I care. It is your personal health and safety that are my topmost priorities.

So just stay away. Yep, that’s right…it’s a cesspool…

…nothing pleasant about it.

Hey…are you still there? Excellent. I actually want to share a little secret with you, but I needed to get rid of all the other readers first. I think I’ve scared them away by now with all that ‘cesspool’ talk but I’m going to have to whisper just in case. What I’m about to reveal must never leave this room. Do you promise?

I know that if you flip open your laptop and visit any news website, you’ll find plenty of negative stories about Mexico to confirm the theory that this is a country worthy of no more than the occasional spring break drinking binge or quick stop on a cruise itinerary.

Well, luckily for me over the past two and a half months, as soon as I’ve closed my laptop, I’ve had the good fortune to walk outside my door and into the real Mexico. Yes, that’s right, I’m actually in Mexico right this very moment and if you can believe it, I’m not typing this from a bomb-proof bunker and I’m not wearing a bullet-proof vest or a mask over my nose and mouth. And I even just brushed my teeth using the tap water!

I’m currently living in the small village of Sayulita. This is a community without any full-time police officers, where doors are rarely locked, shops are often unattended and belongings can be left on the beach for hours without fear of being stolen. Can you believe that?

Well, there’s more…I recently spent one week in that most dangerous and intimidating of places – Mexico City. Yes, yes, I know I’ve lost my mind and trust me, I feel very lucky to still be alive. You can imagine the sheer terror I faced as I…

Visited a variety of impressive art and anthropology museums; explored several inspiring historical sites such as the massive pyramids at Teotihuacan; watched daily life pass peacefully by in the larger-than-life zocalo, while surrounded by some of the city’s most interesting buildings; strolled through sprawling parks, creatively-landscaped gardens and dozens of picturesque plazas, all full of Mexican families, unique vendors and benches perfectly positioned for some great people-watching; ate endless amounts of delicious street food and mouth-watering plates of local specialties without ever paying more than a few dollars for a meal; witnessed traditional Aztec dance gatherings and musical performances taking place in the streets; traveled all over the city via an efficient and dirt-cheap metro system; slept in a modern and comfortable hotel in the heart of the city center for $20/night; listened to hundreds of energetic mariachi bands compete against each other for the attention of the crowds in Plaza Garibaldi; attended the unforgettable “Infierno en el Ring” Lucha Libre match at the Arena Mexico; encountered an endless stream of friendly, honest and generous Mexicans who went out of their way to make me feel most welcome in their great city

Now that I think about it, not one person tried to kill me, rob me or even glance at me with seemingly negative intentions. Weird, I know.

I’m sure you’re thinking, “Why is he messing around with my head? This stuff can’t be true.” Let me assure you, I was as shocked as you are and I still scratch my head in disbelief several times a day as Mexico’s true identity continues to reveal itself.

A few weeks back, while feeling bold and immortal, I ventured off to visit the southern city of Oaxaca, a place my guide book described as “enshrouded in an atmosphere of extreme tension.” Let me tell you, enshrouded it most certainly was. However, the atmosphere was not so much ‘tense’ as it was ‘peaceful beyond belief’. This stunning and laid-back city instantly became one of my favorite places on earth. Beautiful plazas and cobblestone streets lined with historic buildings, nightly festivals and live music on every corner, colorful markets selling freshly-cooked regional foods, the absolutely awesome and little-visited Aztec pyramids atop Monte Alban…

Again I was having real difficulty believing that this was the same nasty Mexico I’d been reading about all these years. Where was all the violence, filth and moral corruption?

In order to snap me out of this surreal dream, I decided to take a 12-hour bus trip across Mexico, one that was guaranteed to be a journey from hell. Well, imagine my shock when I discovered that I wouldn’t be sharing my seat with five other people and that the aisles were going to be chicken- and goat-free. The bus driver wasn’t even drunk!

It turns out that long journeys in Mexico take place not on dilapidated buses, but on luxury long-distance buses, often with flat-screen televisions, films and music, free beverages and snacks and fully-reclining seats with absurd amounts of legroom. And that’s not to mention the separate restrooms for men and women, functioning air conditioners and the satellite-controlled speed monitoring…it actually puts Greyhound to shame!

I started thinking that there must be some kind of conspiracy going on here. Somebody clearly wants Mexico’s image to remain in the dumps forever. Truthfully, I don’t want to get involved in any conspiracy mess. That’s why I’m just playing along and re-confirming to the world that Mexico is indeed a CESSPOOL that should never be considered for a vacation. That’s right, you all heard me correctly!

Hey, sorry for that tangent, I thought I heard someone else listening in.

Between you and me, I could go on and on with examples of why Mexico is such an incredible destination. A variety of landscapes, a variety of cultures, a variety of activities…even the most hard-to-please traveler is guaranteed to fall in love with this country. I really do swear to you that Mexico isn’t overflowing with violence and disease. This place is instead bursting at the seams with culture, history and hospitality.

I’m not saying that Mexico is perfect. After all, the Mexican people do seem to have their priorities a bit messed up. Who in their right mind puts family, friends, community, happiness, avoiding stress and enjoying the simple pleasures of life ahead of working 12 hour days at a job they can’t stand?

So they’re a little misguided. I’m sure they’ll eventually come around and change their ways. After all, look how happy and healthy we are in the developed world.  They’ll want to be like us sooner or later. 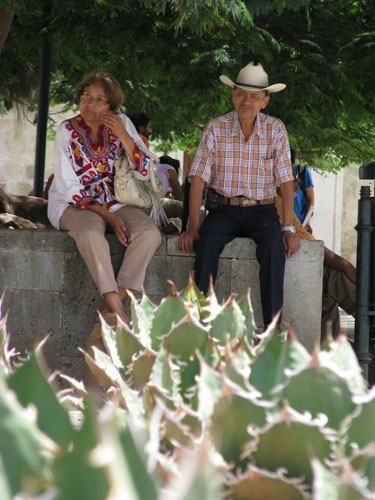 Apart from that one little blip, I have nothing else negative to say about this country. And if you keep your promise, the secret of Mexico’s true identity will remains ours. Let everyone else stay away in fear. We don’t want this place to become overrun with too many gringos, do we?

So, the next time you see an article describing Mexico as “rowdy, violent, sleazy, full of pickpockets and with a heavy police-presence”, just nod your head in full agreement for all to see. It’s what the media says after all, so it must be true…

Then, rush back home, lock yourself in your room and continue packing for your upcoming Mexican adventure, being sure to leave your weapons and protective body suit behind.

Stay tuned…next week I’ll discuss why you should think about moving to Mexico permanently. Sound crazy? Not if you want a super-high quality of life at a ridiculously cheap price. Subscribe to my RSS or email feed above to stay in the loop.