Lucerne, Switzerland: How Not To Buy Apples

Lucerne, Switzerland: How Not To Buy Apples 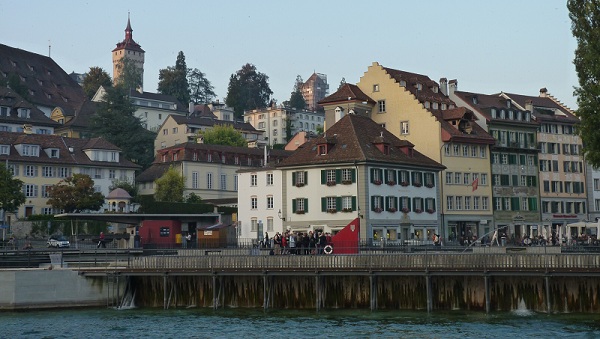 Swans. A great deal of swans, and ducks. Bridges, wooden bridges, too. And flowers. Flowers everywhere. Lots and lots of flowers.

This is Switzerland after all, and one should not expect anything less than swans, wooden bridges and an abundance of flowers. And yes, I was greeted by all of those things upon arrival in the town of Lucerne, along with the Swiss Alps, lakes, rivers, ancient town walls complete with watch towers, as well as clean streets, manicured gardens, efficient public transportation and of course, empanadas.

Actually, the very first thing I did upon arrival in Lucerne was to eat empanadas.

I had been strolling around Lucerne’s main train station looking for a quick bite to eat when I ended up in the basement of the terminal building. I turned to the left and walked towards a group of people sitting in comfy armchairs and then, suddenly, I found myself standing directly in front of an empanada stand. This wasn’t an ordinary empanada stand either, it was a Mexican-owned empananda stand that served up chicken mole empanadas.

Before I knew it, I was speaking Spanish with the woman behind the counter, a woman who had only arrived in Switzerland four weeks ago from Mexico City. And given that I’ve spent a significant amount of time in Mexico lately, I was ecstatic to be speaking with this women. In fact, I became so engrossed in the conversation that I forgot that I was not actually in Mexico.

Our chat lasted for about twenty minutes, with her serving up fresh empanadas to a steady stream of customers the entire time. After devouring two impressively tasty, yet shockingly expensive ($5 USD each), chicken mole empanadas myself, I finally decided to leave her to her work and said goodbye. And then, as I walked away, I could not help but break into laughter at the fact that the first person I ‘met’ in Switzerland was a Mexican and the first meal I had consisted of a Mexican snack item.

After a few hours of wandering the streets of the Old Town on my second day in Lucerne, I suddenly felt an urge for some fruit and so I entered the first supermarket that I came across. I went straight to the fruit section, placed two golden delicious apples into a bag, then grabbed some orange juice and some yoghurt and went upstairs to the check out area. After a few minutes, it was my turn at the cashier and the woman at the register scanned the yogurt and then the juice. Next, she grabbed the bag of apples, started searching for something on the outside of the bag, and then put the bag down, quite roughly I may add, while giving me one nasty stare.

And then, as I stood there somewhat confused, I was reprimanded, in Swiss-German, and quite severely it seemed, because I had forgotten to follow the one vital rule of European fruit shopping. You see, when you want to purchase fruit at a supermarket in many parts of Europe, you must first weigh the fruit on a scale that is located in the fruit section and then print out, and place onto your bag of fruit, a price sticker before bringing it up to the cashier.

I make this mistake every time I’m on this continent. And unfortunately, while I would have been perfectly happy to go back downstairs and print the sticker myself, the cashier chose to bark out a few sharply worded lines at me and then angrily storm off downstairs herself to the fruit section.

So there I stood, causing a major backup at Register #12, with people asking me, in German, what was going on and me trying to explain that I screwed up with the apples. I’ve never seen so many people walk away from me while shaking their heads in disgust.

It was a cold night and I was hungry. And even though the apartment where I am staying is a good thirty minutes walk away from the center of town, I threw on all of my warm clothes and began the hike anyway. Up and down the hills I went, with my mind focused on one specific destination that I had passed by earlier in the day.

And let me tell you, as soon as I walked up the stairs and opened the door to the Kanchi Indian Restaurant, I wanted to hug every waiter and waitress that glanced my way. In fact, the waitstaff turned out to be so incredibly friendly that I don’t even think they would have minded a big embrace from a random tourist.

For the next hour and a half, I was beaming as I devoured a magnificent vegetarian thali, joked around with the waitress (who admitted to me that she only knew five words in German and was happy to be speaking with me in English), and enjoyed the toasty atmosphere, brought on not only by the heater in the room, but from the fifty or so densely packed patrons, all of whom were Indian apart from me.

I’m not sure I’ve ever been in such a warm, friendly Indian restaurant. Even many of the other diners came up to me just to say hello on their way towards the exit after finishing their meals. I did not want to leave this place, even after I had scraped up every last bit of aloo matter with my crumbs of nan bread. Knowing that I had a 30 minute, mostly uphill walk back didn’t help either.

However, eventually, after one last look at the requisite Ganesh poster on the wall and a good luck tap on the requisite wooden elephant’s head, I said my goodbyes to the staff and left the restaurant. Back on the streets of Lucerne, I once again, just as I did after walking away from the empanada stand, had to remind myself that I was actually in Switzerland.

MY SHORT VISIT COMES TO AN END

Yes, I know that none of the above involves much in the way of typically Swiss experiences, but hey, that’s how my time here has panned out so far. On the other hand, I did spend the rest of my short visit eating my fair share of pastry items from the famous Bachmann’s Bakery, walking along the shores of the Vierwaldstaettersee (Lake Lucerne) and sitting in a beer house next to River Reuss. I did try to admire the towering mountains that surround this town, but I only managed to see them for a quick two minutes one evening as they have remained shrouded in fog the rest of the time. 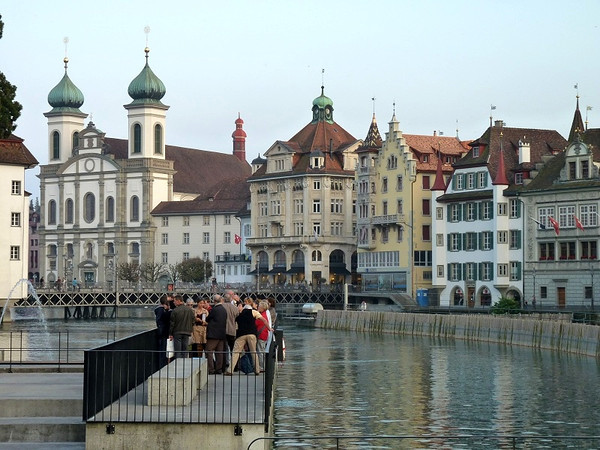 Anyway, I knew from the start that my time in Lucerne would be abnormally short as I simply chose this town to be my starting point. Such a short stay obviously doesn’t lead to the most fulfilling of travel experiences but on the other hand, it does certainly benefit the wallet by ensuring that I’m not completely broke by next Tuesday. (All I can say is that Switzerland is expensive, $11 USD for a bottle of water at a normal restaurant type of expensive!)

So, tomorrow morning, I shall board a train to Vienna, which will mark the first true leg of my Eurail adventure. I’m looking forward to the 9-hour journey as it’s been a while since I’ve traveled by train in any country. And what better way to get back into the comofort of train travel than with a trip across the Austrian countryside.