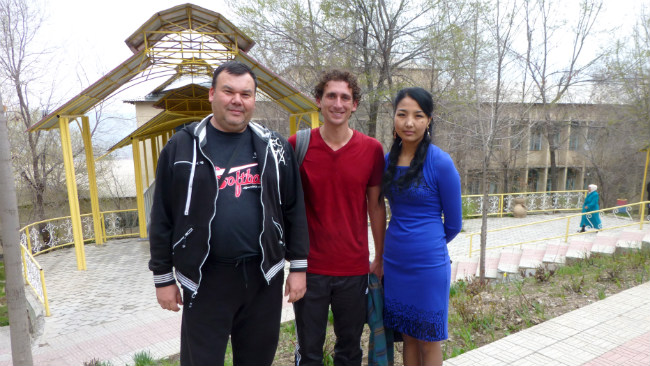 Welcome to the second episode of Wandering Earl: Live From Here, my new video series. Here’s a little background for this next episode…

Two weeks ago, I was in the town of Jalal-abad, Kyrgyzstan when I learned about an old Soviet spa/sanatorium located on top of a nearby hill. With not much else to do, I decided to jump into a taxi and head over there, completely unaware at the time that the next few hours of my life would prove to be some of the most memorable of my entire 14 years of travel.

When I entered the first building I came across, I simply asked the woman at the reception desk, ‘Is this the spa?’. She smiled and picked up the phone, calling over the only English-speaking staff member on the premises.

Before I knew it, Elgar arrived and he absolutely could not believe that a random foreigner had shown up at this spa. He was smiling and laughing and so eager to show me around, which he, along with his equally surprised assistant, did, pointing out, in very limited English, everything that the spa offered. (The photo above is of me, Elgar and his assistant.)

And when I asked if I could book a mud treatment, he truly lit up and the fun really began. Suddenly, I was being taken care of by a team of excited, beaming, amazingly friendly spa attendants who showed me into a room and began preparing my treatment. Then, there I was, lying naked on a table, covered in mud, being wrapped in blankets, and loving every minute of it.

It was quite a day. And once it was all over, after having spent almost three hours at the spa, I went to pay my bill. But Elgar simply looked at me with another huge smile on his face and said, “No money. This is a present for you.”

I was blown away. I felt refreshed and rejuvenated, not only from the mud and the minerals but also from being fortunate enough to have met such beautifully kind people. As a result, I will never forget that day, or the people I met, at this old Soviet spa in Jalal-abad, Kyrgyzstan.

Now I bring to you this second episode of my video series, an episode that takes place not just at that very spa, but during the middle of my mud treatment!

(If you’re reading this post via email, just click here to view the video on my blog.)

Have you ever had a day that involved a completely unexpected activity/experience that ended up being a highlight of your travels and/or life in general?