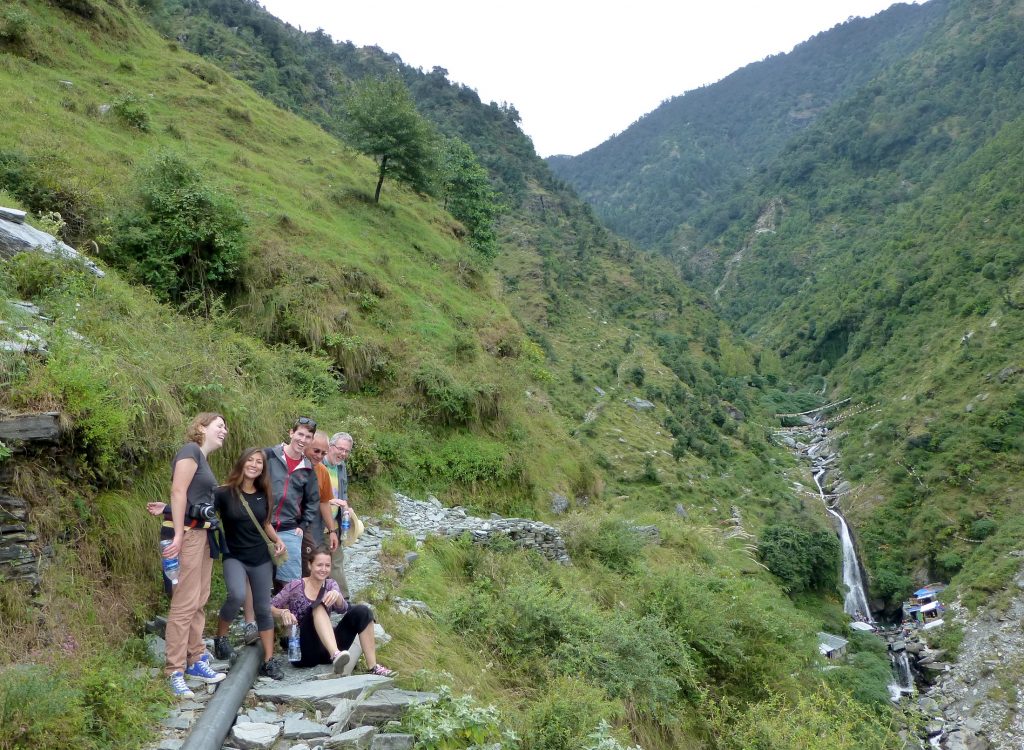 *This is a guest post from a reader of Wandering Earl, a writer, fellow traveler and friend.

My name is Gordon Hopkins. I’m a writer for a small town newspaper in rural Nebraska, The Fairbury Journal-News.

A few years ago, I took one of Earl’s tours to India (I’m in the above photo!). It was my first ever journey to Asia and I think one of Earl’s earliest tours as well, so we were both finding our feet a bit.

Naturally, I wrote about the trip for the paper and the story has now found a second life in a new anthology called Beyond Our Borders: Unexpected Travel Writing, edited by myself.

Earl was nice enough to write a foreword to the book and even nicer to let me write a guest post on his blog. However, I promised him this wouldn’t be a commercial for my book. So I need to find something to write about that you folks might actually be interested in reading.

I have a great love for travel writing, as I suspect do you, otherwise you wouldn’t be here. So how about a list of travel books, a list of my favorite travel books? Travel book lists can be found all over the internet of course. The internet loves lists, after all. There is even a term for it: listicle (which sounds like something you see a doctor to get lanced).

Perusing these lists, you will certainly see a lot of the same titles over and over again. You will likely see some books you’ve never read or never heard of. However, there are some books you will never, ever see, despite containing some truly great travel writing.

So, put on your reading glasses because here is my list of the top five travel books never on anyone’s list of travel books.

1: In Cold Blood by Truman Capote

“The village of Holcomb stands on the high wheat plains of western Kansas, a lonesome area that other Kansans call “out there.” Some seventy miles east of the Colorado border, the countryside, with its hard blue skies and desert-clear air, has an atmosphere that is rather more Far West than Middle West. The local accent is barbed with a prairie twang, a ranch-hand nasalness, and the men, many of them, wear narrow frontier trousers, Stetsons, and high-heeled boots with pointed toes. The land is flat, and the views are awesomely extensive; horses, herds of cattle, a white cluster of grain elevators rising as gracefully as Greek temples are visible long before a traveler reaches them.”

Creative Writing 101 should always begin with this opening paragraph of Capote’s “non-fiction novel.” “This is a true crime book, not travel book,” you say? Perhaps, but to Capote, who was raised in the South before becoming the doyen of New York literati, Kansas was every bit as alien as Mars, and he wrote about it as such, observing the “natives” much as he might a primitive tribe on some remote island.

There is more than Capote’s view of the plains of the Midwest that fascinates the reader, however. As Dick Hickock and Perry Smith, the brutal killers of the Clutter family, hit the road, trying to evade capture, the book becomes a sort of homicidal variation of On the Road, with Hickok and Smith as evil twins of Jack Kerouac and Neal Cassady.

2: The Mole People by Jennifer Toth

Published in 1993, this book is, in a sense, a pretty standard travelogue. The writer took trips to an exotic locale not many have visited, interviewed the locals, learned the customs, and generally tried to give the reader an impression of what life is like in this place that most will never see.

The reason nobody thinks of this book as a travel book is because this “exotic locale” is the grim, underground tunnels of New York City, and the natives are mostly the homeless, the misfits, the outsiders of “polite society.”

More recently, a fellow named Matthew O’Brien wrote a similar book called Beneath the Neon, about those living in the tunnels under Las Vegas. Perhaps this is the start of a new genre.

3: The Curse of Lono by Dr. Hunter S. Thompson

Fairly or not, many fans of the late father of Gonzo journalism were disappointed with the good doctor’s account of the Honolulu Marathon. What they wanted was Fear and Loathing in Las Vegas in Hawaii. What they got was somewhat different.

Oh, there is still plenty of alcohol and drug fueled lunacy. The book opens on a plane and a passenger exits the lavatory with a blue arm, having apparently dropped his stash down the toilet and then reached in to retrieve it.

However, Thompson’s view of the islands proved to be somewhat more thoughtful and introspective on occasion. The big difference between Fear and Loathing and this book is that Thompson despised Las Vegas and everything it stands for, whereas he clearly had respect and, in his own outrageous way, even love for the Hawaiian life.

It should also be noted that editing the book was something of an ordeal. It is liberally peppered with passages from Richard Hough’s The Last Voyage of Captain James Cook, which is in the public domain and clearly added to pad the book’s length.

This novel is actually made up of four novellas, three of which were published in Isaac Asimov’s Science Fiction Magazine in the 1980’s. That is what those in the publishing game call a “fix-up.”

These stories are about a pair of American expats in Nepal, George Ferguson, a mountaineer and tour guide; and George Fredericks, apprentice to a Tibetan monk. Together they encounter a yeti, Shangri-la and the whole mythological milieu of that part of the world. But they also have to deal with the realities of beggars in the streets and bureaucrats in the offices and villagers scrambling for a living and demanding tourists and bugs and mud and rain and all the things one has to deal with when traveling in a foreign country. Despite the fantastic elements, it gives a surprisingly realistic look at Nepal.

Plus, the book is funny as hell.

5: Love, Poverty and War: Journeys and Essays by Christopher Hitchens

Hitchens is best known today as one of the founding fathers of “New Atheism,”  but he was first and foremost one of the best journalists ever to hold the job. His writing included not just politics but literary criticism, interviews and, yes, travel writing.

It is a pity he never published a book exclusively of travel writing, but of all the collections of his journalism, Love, Poverty and War probably comes closest.

Hitchens was British and, even though he lived much of his adult life in the U.S, his origins informed his views on Americana. He gives readers his impressions of traveling down Route 66 and Sunset Strip, as well as his thoughts on the cultural impacts of such American icons as Bob Dylan and William Faulkner.

This list easily could have gone on (and on and on and on). So you see, if you love reading about other worlds and other peoples, sometimes you don’t want to stick to the obvious routes. Not unlike actual travel. There is plenty of unexpected travel writing out there if you are open to it.

(I want to thank Gordon for inviting me to write the foreword for Beyond Our Borders. It was my first foreword and it was an honor to write it. And Gordon, I definitely look forward to traveling with you again somewhere, hopefully soon! – Earl)

Do you have any interesting travel books to recommend that are not normally on lists of recommended travel books?