How I Got Kicked Out Of Romania

How I Got Kicked Out Of Romania 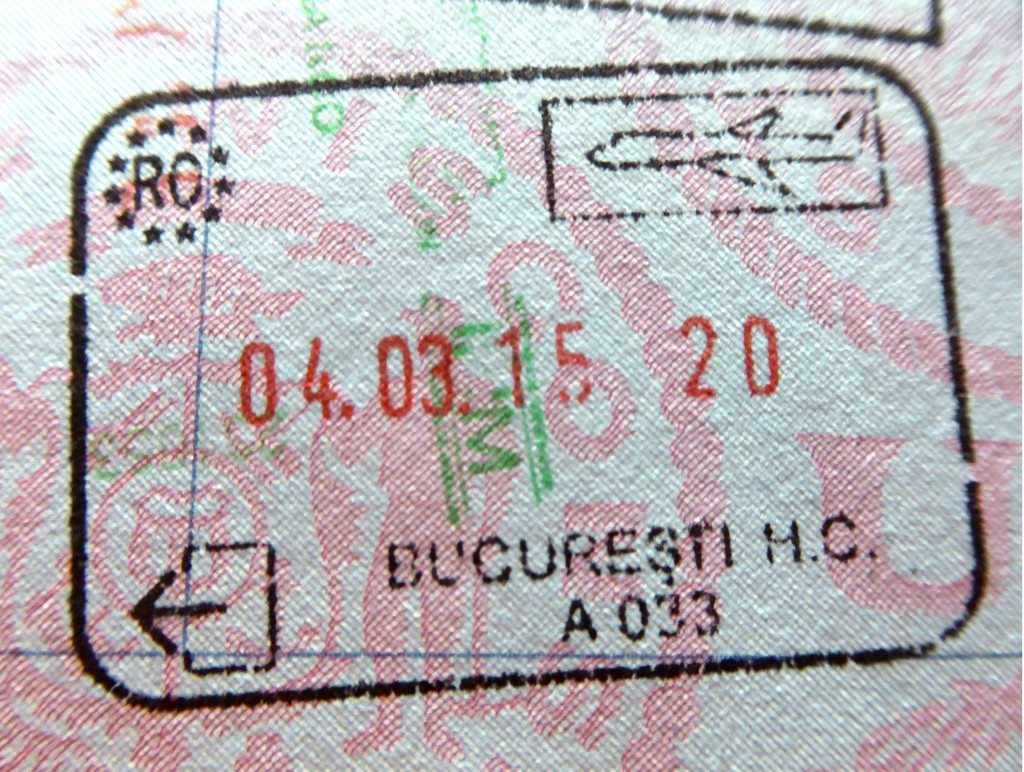 That’s exactly what I yelled…okay, maybe I just mumbled it to myself…fine, I only said it in my head…but regardless, it was said as I left Bucharest last week, right after I discovered that my residency visa had suddenly been refused.

The story actually begins back on March 3rd, just after midnight, when I climbed into a van in the Paharganj neighborhood of Delhi, India and went to the airport. My latest Wander Across India Tour had come to an end and so, it was time for me to head to my next destination.

From India I flew to Dubai, changed planes, and continued on to Bucharest, Romania.

Just as the sun was setting the plane touched down at Bucharest’s Otopeni airport and, once inside, I approached the immigration counter as usual. The officer at the counter swiped my passport, looked at his computer screen for a few moments and then said, “You have residency here, where is your residency card?”. To which I replied, “I was told to pick it up in early March so I’m going to pick up the card tomorrow.”

All was good. Through immigration I went. It felt great to be back in this city.

Off to Pick Up My Residency Card…

The following afternoon, I was first in line at the main immigration office in the center of Bucharest when the ‘pick up your visa’ counter opened at 1:30pm. I approached the woman behind the counter, handed over my passport and waited while she typed something into her computer. She soon stopped typing, handed back my passport and, to put it simply, told me that my residency visa had been refused.

Confused was I, especially since they had just let me into the country the day before by noting that, according to the immigration system at the airport, I had a valid residency visa.

So, there I stood. No residency visa.

Not only that, but without the residency visa, that meant I was now in the country illegally since I was well over the “90 days in any 180 day period” that US citizens are allowed to stay. If I didn’t have residency, I had to leave immediately and not come back.

1. The decision to refuse my visa was made by a team of high ranking immigration officers that only review certain types of visa applications.

3. If Romania needed a blogger to promote their country, they could just go to the unemployment office in Bucharest and find a blogger there who would be willing to write about it.

That’s why they refused my visa apparently. Needless to say, I left the immigration office with my head down.

Luckily, I already had a 6-day trip to Italy planned starting the next day and so, after an evening of unexpectedly having to pack up all of my stuff and mentally preparing myself to leave Romania for much longer than anticipated, I flew to Bologna the next morning at 6:50am. Of course, that was after spending a few minutes at airport immigration explaining my whole story so that they wouldn’t fine me for overstaying my tourist visa. In the end, they let me go since they were the ones that let me into the country in the first place, but they did inform me that I would not be allowed back in for at least 3 months.

I then spent 6 days in Italy – Bologna, Florence and Venice – and despite running on fumes at this point, I managed to have a most excellent time.

As that Italy experience came to an end, though, I realized that I needed a plan, but I wasn’t able to think too clearly. So, out of frustration and sheer exhaustion from the previous week’s events, I booked a flight back to the US to visit some family.

It’s all a bit of a blur at this point.

India, Dubai, Bucharest, losing my residency, packing up all my stuff, Bologna, Florence, Venice, a short flight to Frankfurt and then a long flight to Miami.

What I do know is that ever since I left Delhi just 10 days ago, a lot has been going through my mind. Here’s some of those thoughts:

1. It’s all about human beings. I’ll repeat it a million times. The main reason I keep on traveling is not because of the sights I see, but because of the people I meet and the interactions we share. When I left for the airport just after midnight back in Delhi, I was expecting there to be two people in that van, myself and one other person from the group whose flight left at a similar time to mine. However, in a never-before-seen act of tour group solidarity, that van was full! The three remaining people from my group, whose flights home weren’t for another day or two, as well as my good Indian friend, Ajay, who helps me organize these tours, all piled into the van as well. Why? They all wanted to spend as much time together as a group as possible, so why say goodbye at the hotel when we could gain another 45 minutes of hanging out during the ride to the airport? I absolutely loved it. How sweet is that? We had a blast on the ride to the airport and waited until we were right there in front of the airport entrance to say farewell. This is what travel is all about.

2. India baffles me. Every time I’m about to depart India, I feel so ready to leave that land, but about 48 hours later, I already start to miss it dearly again and start looking forward to my next visit. No other country has this effect on me.

3. Dubai airport is the most incredible location for people watching. While I’m not a huge fan of Dubai itself, its airport is the most diverse place on earth, in my experience, by a long shot. In the two and a half hours I spent there a week and a half ago, there was not a single region of the world that was not represented in the terminal and I was only in the relatively small Terminal 2, which is solely for the budget airline FlyDubai. I sat at a cafe and just watched and watched and watched the people all around me. Loved it.

4. Anger never helps. Getting frustrated and angry at things you can’t control doesn’t do any good. I’ll admit, I got quite angry when I was told that my residency visa was refused and even though the immigration officer spoke no English, I started arguing anyway (my basic Romanian isn’t good enough to argue in). It was useless of course at that point. It only made me more upset, it made the immigration officer angry and it didn’t help the situation in any way whatsoever.

5. Wizz Air is not my favorite airline. I’ve now flown this budget airline twice and while their fares can be absurdly low, I really don’t understand why they, like other budget airlines in Europe, refuse to give seat assignments. There is always chaos at the gate as everyone crowds around and fights to get on the plane as quickly as possible and then everyone continues battling each other once on board as they try to get a decent seat. Then, the plane takes off with a group of angry, frustrated people when a simple organizational system at the gate or seat assignments would solve this immediately.

6. Bologna has the oldest continuously operating university in the world. Never knew that. It was founded in 1088 AD. And walking around this university, with its endless number of majestically historic buildings, as well as an air of education and youth seeping out of the ancient walls, was something special.

7. Venice, wow! I loved Venice, Italy and I wasn’t expecting that. I really hope I have a chance to spend some significant time there at some point as my short visit wasn’t enough at all. Wandering the tiny lanes in all of the different neighborhoods is something I could do for weeks on end. One of the most surprising destinations of all my travels.

8. Life can really, really, really surprise you. Just when I thought nothing could surprise me, being told I didn’t have the residency visa and then suddenly having to change my plans in less than 24 hours, completely caught me off guard. Definitely wasn’t expecting that at all. Never imagined this would happen.

9. There’s nothing wrong with surprises. Sometimes our lives need to be shaken up a bit and this experience certainly did that for me. I’m now in a different part of the world with a different mind frame than I was expecting a week ago. Time for some thinking, perhaps some new plans, and maybe even a new direction in life. Who knows where this one surprise will take me? That’s kind of exciting!

How’s your week going? Any visa issues you’ve experienced during your travels or do you have any visa questions?