Join Me For A Tour Of Helsinki, Finland

Join Me For A Tour Of Helsinki, Finland 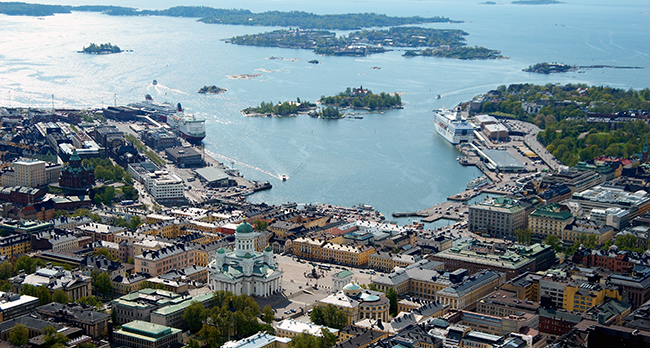 After recently spending three days in Helsinki, Finland, and luckily discovering that a visit here doesn’t have to be as prohibitively expensive as I once imagined it to be, I thought I would take you on a tour of Helsinki right here on the blog. First, I must admit that this is not exactly a city that immediately appears to offer a great deal for travelers. You do have to work a little harder here to uncover the activities and experiences that will ensure each day is a rewarding one.

But there’s certainly nothing wrong with a little extra work and hopefully, after the excursion we’re about to embark on, you’ll agree that Finland’s capital city is a city worth visiting.

So, let’s begin this tour of Helsinki, or Helsingfors as it is called in Swedish (Finnish and Swedish are Finland’s two official languages)….

A Place to Stay

You’ll need a place to stay, and if it were me, I would definitely check into the Erottajanpuisto Hostel, located right on Uudenmaankatu in the center of the city, where dorm rooms cost 27 Euros (it’s a normal price for Helsinki) and private rooms start at 54 Euros. It’s a comfortable, classic hostel that offers great value and a more-than-ideal location, which is a combination that is as attractive as it gets for budget travelers. 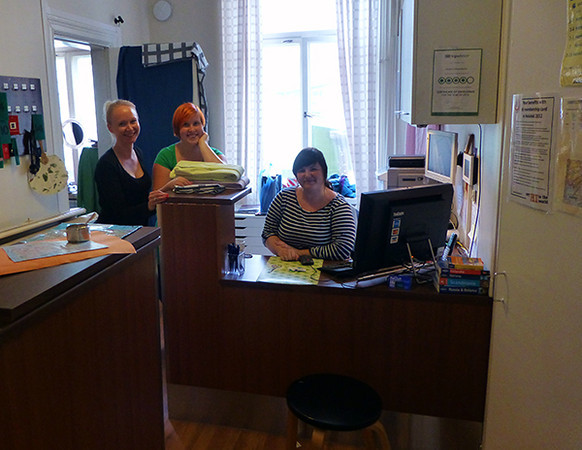 Once you throw down your backpack or rolling suitcase or whatever you choose to travel with, it’s time to head outside and start walking along Annankatu towards the Töölö neighborhood and the Sibelius Park. It will take you around forty-five minutes or so and you’ll probably get lost, but that’s alright. Feel free to ask anyone on the street for directions as almost everyone speaks English quite well.

The park itself is an ordinary park, but its main, and quite popular, attraction is the Sibelius Monument, a monument dedicated to composer Jean Sibelius. To me, this monument, consisting of more than 600 pipes, looked like a bunch of uninspiring pipes and not much else, however, I most certainly enjoyed sitting on a park bench watching busload after busload of tourists gather around the thing, nodding their heads in approval and snapping dozens of photos as if they had waited their entire life to see this monument with their own eyes. 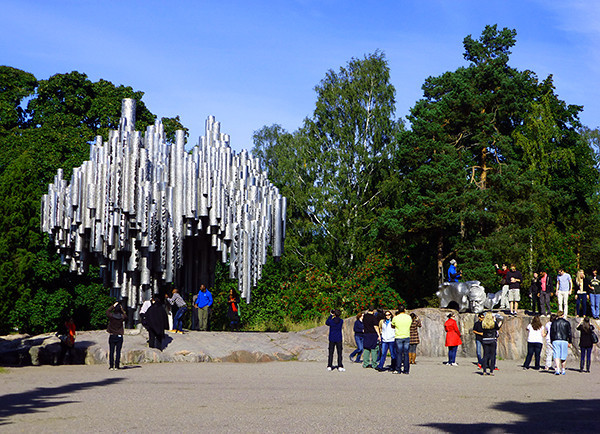 Once you’ve taken your photos of other people taking photos of the pipes, stand up and continue across the park, heading towards the water about 200 meters away. Cross the street, walk onto the foot path and turn left, which will leave you facing a small red shack with the word “Cafe” painted on the side. Go there. It’s called the Regatta Cafe. Order a coffee and a freshly baked cinnamon bun, an order that will set you back a very reasonable 4 Euros, and then take a seat at one of the small wooden tables outside, right on the water. Of course, you should only visit the Regatta Cafe if you actually like freshly baked cinnamon buns. However, if you don’t enjoy the miracle that is a freshly baked cinnamon bun, I’m not so sure I want you as a reader of this site.

From the Regatta Cafe, it’s time for a long hike, one that takes you across the rest of Töölö and over to the Hakasalmenpuisto Park, where you’ll encounter plenty of foot and bike paths surrounding the Töölönlahti Lake. Walk either clockwise or counter-clockwise around the lake, the choice is yours, until you reach the foot bridge on the other side.

Walk across the bridge, which takes you over the train tracks leading out of the city, and just like that you’re in the Kallio area, a neighborhood classified as “enjoyably groovy and hip”, by, well, me, a conclusion I was surprised to actually reach considering that I am neither groovy nor hip.

Now prepare yourself. Tighten your shoelaces, re-buckle your belt, crack your neck and gargle some salt water. This neighborhood is quite full of things to do and you’re going to be busy for the next few hours.

Feel free to tackle the following in any order you wish… 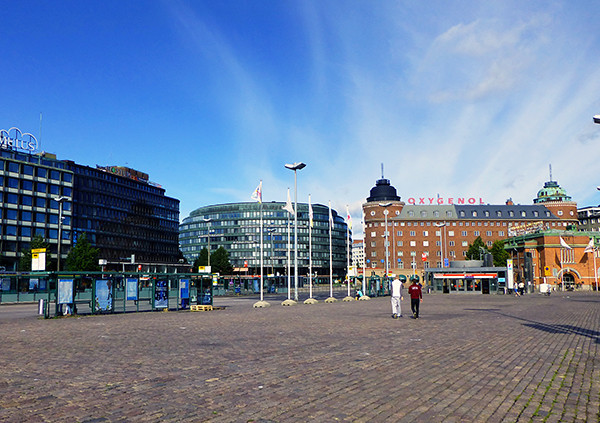 Finally, when you’ve had enough of Kallio and its surroundings, just walk over the Pitkäsilta Bridge back towards the heart of the city center…

Keep walking south and you’ll soon end up in Senate Square, where you’ll find a large, open space surrounded by the Government Palace, National Library, main building of Helsinki University and the huge white Helsinki Cathedral, all built during the early- to mid-19th century.

Then, and this step is only for those who work online and find themselves twitching uncontrollably because they haven’t checked Twitter or their email for a few hours, you can walk into any of the dozen or so Wi-fi-connected cafes around the Senate Square. Order a drink, sit down at a table, fire up the laptop (which you’ve been carrying around with you all day just in case you couldn’t handle being disconnected for an entire twelve hours) and spend an hour or two working, or more likely, pretending to work while you mess around online.

Okay, whether your take a work break or not, by now it should be around mid-afternoon and it’s probably a little late to try catching a ferry to the Suomenlinna Sea Fortress, located on a series of islands just fifteen minutes by boat from the harbor down the road. The fortress is absolutely worth a visit and I’ll certainly write about it in the near future but we’re tired right now and we don’t have much time today, so let’s visit the fortress tomorrow instead. 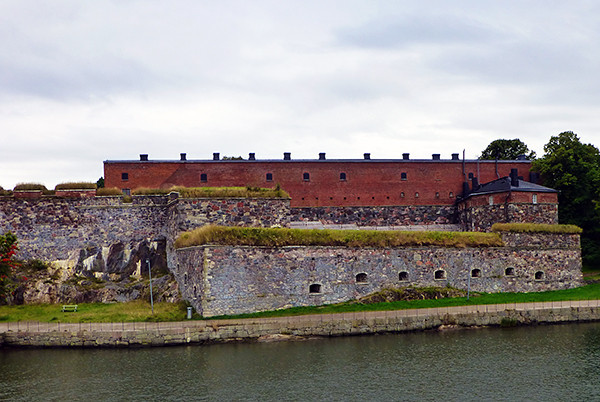 For now, let us proceed along the street known as Snellmaninkatu, but as you do, please make sure you keep your head up and your eyes open wide. Hidden behind the buildings, inside of the mini-courtyards and empty basements, you’ll often find a variety of events taking place such as markets, music performances, art exhibitions and more. You never know what you’ll discover and while you might not walk into random courtyards at home, it’s perfectly acceptable, and even encouraged, to do so in this area of Helsinki.

And at the end of this street, once your courtyard explorations are finished, you’ll run straight into the Market Square, a dense group of booths and stalls selling fruits, handicrafts, baked goods and hot meals that is located right on the water by the ferry port. This is where you’ll want to walk around shaking your head in disbelief, and quite possibly suffer from a very real case of shock, as you notice the exorbitant price of fruit in this country (4 Euros/kg of bananas!). This is also where you’ll debate whether or not you should buy a hand-painted bird sculpture for 75 Euros. 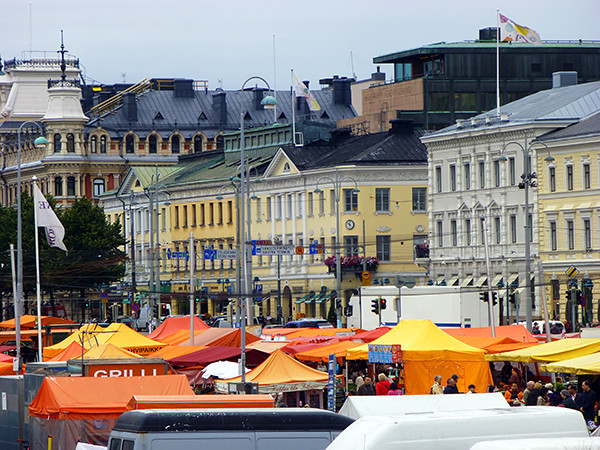 Once you’ve either spent all your money or regained consciousness, you may head west along the Esplanade, walking through the well-manicured Esplanade Park that sits in the middle of this wide avenue. You’ll pass cafes, restaurants and hotels all the way until you reach the intersection with Erottajankatu, which is only a couple of blocks away from your hostel and marks the end of this excursion. 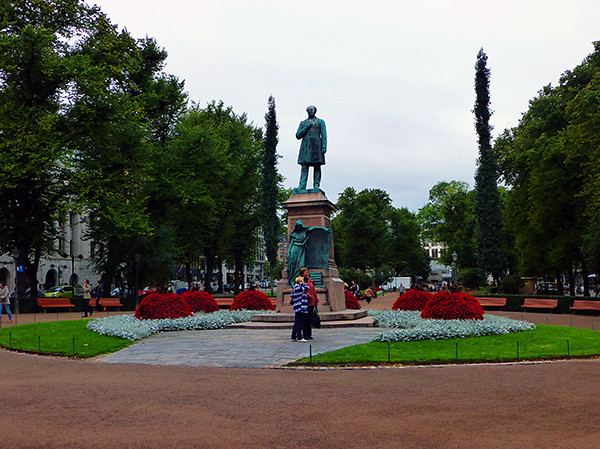 Of course, if you’re hungry, then it would be a wise idea to walk over to Fafa’s Falafel at this point, where you can pick up a fresh, tasty falafel sandwich – think falafel, goat cheese and pesto! – for about 8 Euros. Fafa’s is only one block away from the hostel but even if it was 200 blocks away, I would still recommend it!

Then, with belly full, and your eyes most likely having a difficult time staying open, it’s time to crawl back to the Erottajanpuisto Hostel, where you’ll be welcomed by the friendly staff and a comfortable bed.

And be sure to rest because tomorrow you’re off to the Suomenlinna Sea Fortress, not to mention a whole bunch of museums and botanical gardens as well as taking a bicycle trip along the coast!

Tired? Me too. Have you visited or do you want to visit Helsinki and the rest of Finland? Any questions about the city?