Join Me For A Tour Of Aleppo, Syria

Join Me For A Tour Of Aleppo, Syria 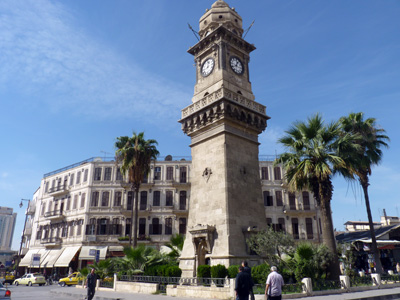 Let’s take a tour together, a tour of Aleppo, this city in northern Syria that proved to be a most difficult place to leave.

The goal of this tour is to help any of you who might be traveling to Aleppo in the future gain a better understanding of what to expect and, for those who probably won’t be visiting Aleppo any time soon, to give you a general taste of what this city is all about.

Either way, grab your camera and a bottle of water (which you can fill up using tap water as it’s perfectly safe to drink here!), put on some comfortable walking shoes and let’s begin…

We’ll start off by meeting at the intersection of Bab Al-Faraj and Al-Ma-ari Streets where we can take a few minutes to marvel at the 110 year-old clock tower that stands before us, serving as the perfect central landmark of this sprawling city.

And then we’ll cross the road, an activity which is much more complicated and death-defying than it really should be. Given that Syrians aren’t too keen on applying their brakes even when there are pedestrians directly in front of them, we might lose one or two of you along the way, but for those that do manage to reach the other side without being crashed into by a speeding taxi or truck, you’ll be rewarded with a fresh fruit juice and cheese sandwich breakfast from one of the half dozen juice vendors set up on Yarmouk Street. Choose from pomegranate, orange, banana or mixed fruit and you’ll receive a tall glass of fruity goodness for a mere 50 SP ($1 USD)! 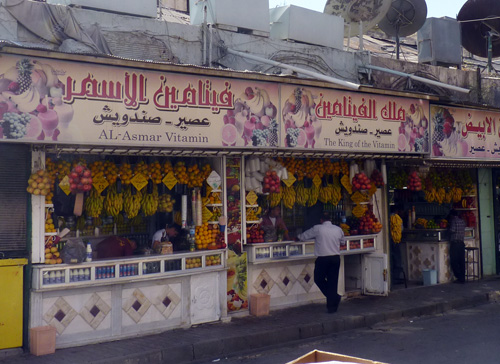 Now that we’re energized, let’s walk a bit further until we reach Baron Street so that we can pop into the famous Baron Hotel, which is apparently the oldest hotel in Syria. We’ll meet Waleed, the friendly manager, and perhaps enjoy a quick tea in the worn, yet historic lounge room where such people as Agatha Christie, Ataturk and Teddy Roosevelt have all spent some time.

From here, we’ll walk along busy Al-Khandak Street and within a few minutes, we’ll reach the entrance to the Haddika Al-Ameh, the largest public park in all of Syria. Designed and built by the French during the 1940s, this peaceful park is the perfect place to observe Syrian life as we stroll along the dozens of tree-lined paths, enjoy a rest on a shaded bench and of course, chat with the locals who will approach us in order to welcome us to their country. 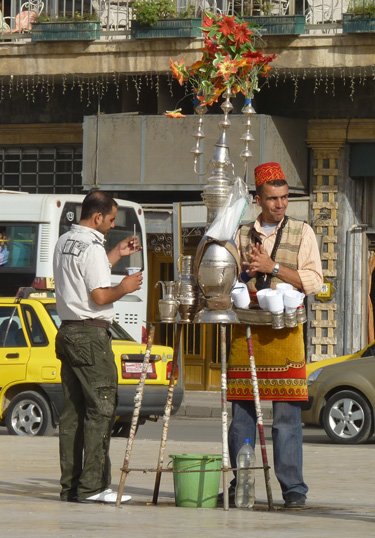 Our next destination will be the Christian Quarter, but luckily, our route to this area of the city passes by the most famous falafel stand in all of Aleppo. And so, I encourage you to fork over the 35 SP (65 cents) it costs for the experience, not only of enjoying this culinary treat, but of trying to order your falafel sandwich amidst a crowd of twenty four other people desperately in need of some mashed and fried chickpeas.

The journey through the Christian Quarter of Aleppo will be a random one as I find it best to simply pick one small alleyway and start exploring. These ancient alleyways seem to go on forever and you never know what you’ll find around each corner. You may stumble upon a small collection of sweet shops or a massive church that suddenly appears in the most improbable of locations. We’ll walk through tunnels, under stunning archways, past old wooden homes and into neighborhoods that seem to have remained the same for centuries. And every now and then, we’ll cross a main street that is full of shops selling the latest clothing fashions to young Syrian girls and guys parading around in designer jeans and sunglasses. 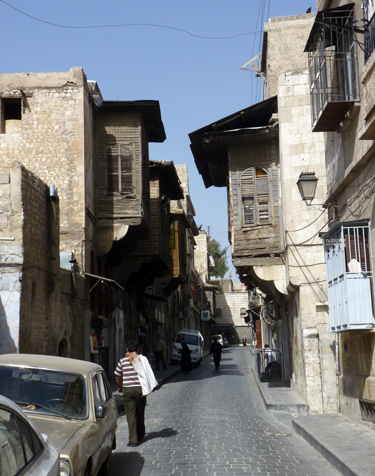 Eventually, after a couple of hours of wandering around in this manner, we’ll find our way out of the fascinating maze and soon end up back on Bab Al-Faraj Street. After passing by the clock tower once again, we’ll walk two minutes along Al-Ma’ari Street until we reach Aleppo’s National Museum.

You may not like museums, but I’m quite certain that even the anti-museum crowd among us will be impressed by the extensive collections here, all of which offers an excellent tour of every civilization that has inhabited Syria since 3000 B.C.

Once you see the amount of history that has been found so far at the dozens of archaeological sites in northern Syria, it will probably leave you scratching your head in disbelief at how much more of these ancient civilizations must still be out there yet to be discovered.

Okay, I have a question. 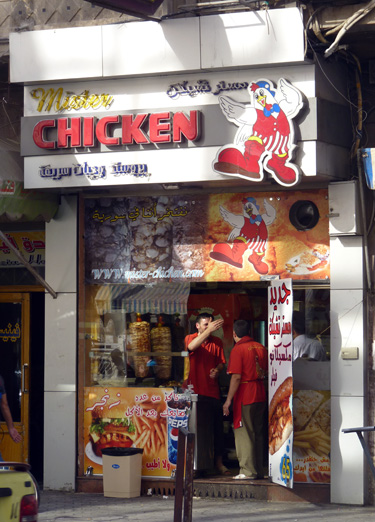 Well, it’s no coincidence that at this point in the tour, the famous Mister Chicken eatery is just around the corner! For those who eat chicken, you’ll have your choice of Mister Chicken’s spicy or non-spicy chicken shawarma, either of which will leave you amazed that a simple chicken shawarma – pita bread loaded with shredded chicken, hommus, yoghurt, tomatoes, lettuce and pickles – can be so remarkably tasty.

For the vegetarians among us, right next door to Mr. Chicken is a small bakery that offers what I believe is the most extensive (and most delicious) selection of cheese and vegetable-filled breads in all of Aleppo. They also sell small Syrian pizzas loaded with vegetables which are so yummy that I’ve been known to eat as many as six of them at one time.

With bellies full, we’ll now go for a 15 minute walk through the Old City where our first stop will be the Great Mosque (Jāmi‘ Bani Omayya al-Kabīr), with it’s thousand-year old minaret rising high into the sky. As we take off our shoes and step foot inside the main courtyard of the mosque, we’ll discover a most calm and peaceful setting and will enjoy a rest on one of the outer walls in order to observe this structure from within. If you wish, you can have a peek inside the main prayer hall, a large, beautifully-designed room where you’ll be treated to the humming and chanting of dozens of people reading from the Koran.

If we’re lucky, we’ll be inside the mosque when the muezzin starts to recite the hypnotic call to prayer, allowing us to watch the place transform itself from a near-empty building to one filled with people preparing themselves to pray. 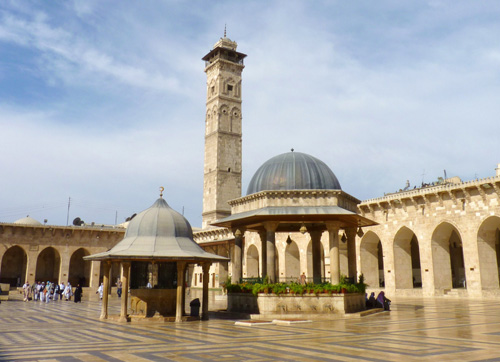 After the mosque, we’ll walk straight into the Old Souk, or main market, one of the entrances to which is just around the corner. Once inside this massive covered market, which fills dozens of tunnel-like and often impossibly narrow aisles, we don’t need a plan. The best way to explore this market is to simply start walking and to go in whichever direction seems most interesting (or whichever direction the crowds of local shoppers forces us to go in). We’ll walk by everything from cloth vendors to food stalls to jewelry shops to welders to spice sellers to wedding dress makers. Chances are that several vendors will strike up a conversation with you, and while some of them are just trying to entice you to visit their shop, many of the vendors will simply be curious about where you are from and will want to welcome you to Syria with a cup of tea.

If you find something you’re interested in buying, perhaps some shawls or some locally made olive-oil soaps, feel free to bargain but don’t forget to do it with a smile! Such interactions in Syria are not treated as two enemies pitted against each other, but as two friends carrying out a friendly business deal. 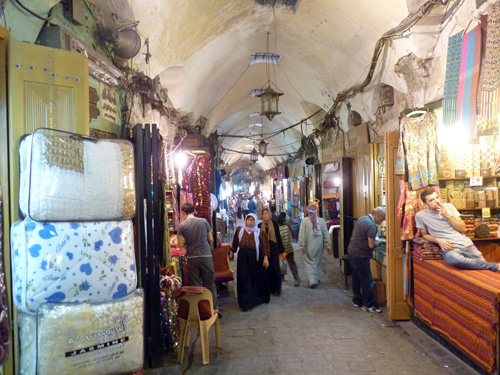 It’s starting to get late and we don’t want to miss the next sight so we’ll now head towards one of the market’s exits. And as soon as we step out of the market, our eyes will fall upon this magnificent structure looming above us. It’s the Citadel (Qala Halep), located on top of a hill in the center of the city and I have no doubt that after one glance you’ll be more than eager to enter. After paying the 150 SP ($3 USD) entrance fee, we’ll soon find ourselves passing through the main gate and just a moment later, standing inside of this grand fortress. For the next couple of hours, we’ll all be free to roam around this site, which has been in near continual use since 3000 B.C.

You’ll be able to catch perfect views of every corner of Aleppo from the Citadel and you can also wander through the ruins of the interior, passing through tunnels, dimly-lit hallways, underground rooms, theaters and the grand Mamluk Throne Hall. It’s a traveler’s dream, with no shortage of nooks and crannies to explore.

And then, before we leave, we’ll all climb up onto the outer wall just as the sun begins to set behind what I’m sure you’ll agree is one of the most beautiful cities in the world. Together we will share this moment of awe as we all hopefully reach the conclusion that our visit to Aleppo has far exceeded our expectations. 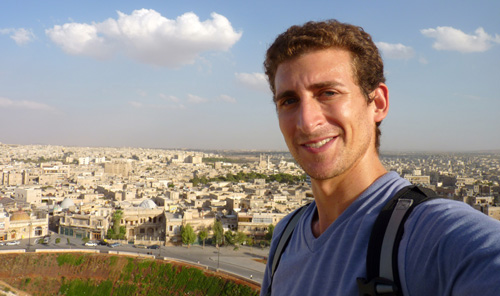 Well, that’s the end of our tour of Aleppo. At this point, you’ll have the choice of collapsing into bed due to exhaustion or maybe venturing out for a delicious meal of mezze (variety of small dishes that are shared among everyone at the table) at the wonderful Al-Kommeh restaurant. There’s even karaoke and a handful of nightclubs to experience later on if you’re interested 🙂

Otherwise, you may just want to relax on the rooftop lounge of your hotel (most of the hotels have them) while puffing on a traditional water pipe, sipping one last cup of tea and soaking in the night time atmosphere of this historic and magnetic city.