If You Are a Socially Awkward Nomad and You Know It…Clap Your Hands!

If You Are a Socially Awkward Nomad and You Know It…Clap Your Hands! 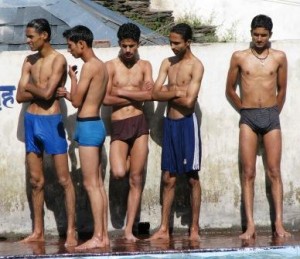 “The norms are different in my society and we don’t need special places to socialize. Every house, every street corner, everywhere is a pub here.” – an Indian friend of mine.

You know what I’m talking about. Don’t you? Please tell me I wasn’t the only one clapping?

Here’s my problem. Back in July, I was in Brooklyn visiting two of my closest friends. One Friday night we ventured over to the popular outdoor bar “Habana Outpost” for a few beers. Without hesitation, my two friends began socializing with the crowd of young New Yorkers, chatting away with the people at the next table and even introducing themselves to several young ladies that happened to walk by.

As for me, I sat there and tried to count how many people walked in and out of the pizza place across the street.

Traditional social scenes have become difficult for me to handle. I don’t know how to behave and I don’t know what to say. I’d be fine if you threw me into a small karaoke room in the middle of Thailand and told me to start singing “Stuck on You” with a group of Thai people I didn’t know. But put me in a room full of people I’m not acquainted with back in the USA and I’m as lost as a falafel sandwich in Papua New Guinea.

After years of traveling, I definitely have wild stories to tell, I’m more open-minded and I’m more comfortable among a diverse range of people…but I’ve discovered that this means diddley if I’m unable to actually begin the socializing process in the first place.

Maybe it’s because the traditional, and more formal, sense of socializing that occurs at home often begins with questions that I struggle with – “What do you do for a living?”, “Did you see Kobe Bryant’s dunk last night?” or “Did you catch that episode of Lost?”. My answers would be ‘I’m not actually sure’, ‘No’ and ‘No’, putting me immediately on the outside of many a conversation.

How Did This Happen?

I’m certain that my current social awkwardness is related to my nomadic lifestyle. By spending so much time away from traditional, young-adult forms of socializing, my ability to mix and mingle with people in the real world has vanished. (Spending an excessive amount of time on tiny islands and remote beach communities probably hasn’t helped much either.)

When a person travels in lands far away, they often don’t have to give any thought to socializing as it tends to happen naturally. As stated in the quote at the start of this post, in many parts of the world, the people don’t need special places to socialize. EVERY HOME, EVERY STREET CORNER, EVERYWHERE IS A PUB. Whether being invited by strangers to join their family celebrations or sharing a meal with people you just met in the street, you just don’t need to plan or seek out your social interactions. They come to you. Heck, it is even much easier to strike up a conversation with the bikini-clad Swiss girl in the hammock next to you on some beach in Vietnam than it is to converse with a friend of a friend in a bar back home.

“How many times during his adventures does the traveler meet a stranger who invites him home to meet the entire family and is then invited to stay there until dinner and then the invitation is extended to include staying the night, and the night involves socializing with the family and many other relatives and friends from the neighborhood who have joined them as well?”

If you’ve spent much time traveling, you know that some version of the above happens quite regularly. As a result, this has become my idea of socializing.

But how many times has such a scene played out when at home? Never.

In the end, the number of interactions a traveler has with strangers on any given day is infinitely more than what would occur in a normal month back in the USA. And that one fact makes all the difference. When traveling, you don’t need a support group of your peers to accompany you to a special location in order to try your hand at meeting new people. All you need to do is return the greetings you receive from complete strangers.

Where Did You Get Your Pants?

When I was in Delhi back in June I needed to buy some pants. As I was roaming the streets of Connaught Place, I noticed a group of young Indians sitting in a small park. There were two females and one male and they were all wearing what I considered to be pants of an unusually high quality for India. I walked straight up to them and asked them where they bought their pants. Not only did they tell me, but they ended up taking me around to their favorite clothing shops over the course of the afternoon as I tried on different pairs of pants. We engaged in interesting conversations, spent a lot of time laughing, shared some chai and street food and became friends. There was no awkwardness involved from beginning to end, it was as natural as a Mexican pouring Worcestershire sauce on their pizza (it’s what they do and yes, it tastes as terrible as it sounds).

Where To Go From Here?

Be the change. That’s what everyone always says, so I guess it’s time.

In five days I’ll actually be heading back to the USA for a short visit, so I’m going to try and change my approach to socializing. My plan is to turn “everywhere into a pub” and be more social with strangers. I’ll start by talking to as many strangers as I can every day – on the street, in the elevator, in line at the grocery store, while stopped at a traffic light. Perhaps I’ll even invite a stranger to join my friends and I for dinner or at least for a drink.

I want to meet new people through the normal interactions of everyday life, not by having to down a few whiskey shots in order to build up enough courage to look away from the pizza place across the street.

That post really made me seem like a social reject! Although I’m no Hugh Jackman, I’m no Mr. Bean either. I just find it troubling that there is such a lack of human connection in so many ‘advanced’ countries that socializing with strangers is so difficult and full of absurd pressures.

But out of curiosity, was anyone else clapping their hands? Has anyone experienced the differences in socializing while traveling versus when at home?