I Just Had The Crappiest Visit To The Taj Mahal

I Just Had The Crappiest Visit To The Taj Mahal 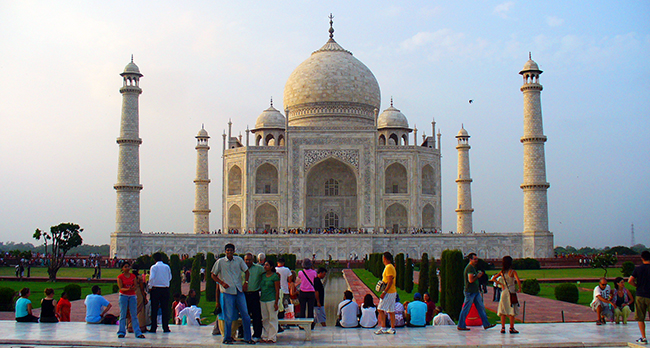 The journey from Rishikesh to the world famous city of Agra (home of the Taj Mahal) was quite lengthy, taking us almost twelve hours to complete. This was partly due to the distance we needed to cover (400 kilometers) and partly due to the many stops we made along the way, which included lunch in the village of Shahpur and a quick stop in Delhi in order to drop off the three members of our group who had signed up for the shorter version of the Wandering Earl Tour.

But I personally didn’t mind the journey. After all, when the reward for such an exhausting trip is a visit to the magical Taj Mahal the following day, I certainly had no right to complain.

And so, soon after our arrival in Agra two evenings ago, I went to sleep excited about what the morning would bring. And when that morning did arrive, I awoke at 9:00am ready to catch my first glimpse of the Taj Mahal. I walked outside my room and started to climb the steps that led to the rooftop of our hotel, hoping to get a decent morning view of this magnificent structure from up there.

And what a view I had…

I had been hit with a case of the Delhi belly, aka ‘severe stomach issues’, just as I began to walk up those steps. As soon as it happened I knew that it was my fault. I had eaten something during lunch the day before that I had a feeling would make me sick, but out of politeness towards our hosts, I ate as much as I could.

Well, the result wasn’t pretty and it wasn’t fun. I ended up spending thirty-two out of the thirty-six hours we were in Agra holed up in that hotel room, and probably half of that time sitting on the toilet cursing myself, among other things.

That’s India my friends. If you’re not careful, there can be consequences.

Luckily, I was all better after a day and a half (and after a few doses of Ciprofloxacin) but unfortunately, it was too late. I had missed the Taj Mahal this time around. There was no time for me to visit as we had to leave Agra early this morning for the full day journey to the Rajasthani town of Bundi.

So, while the rest of the group had a great time at the Taj, the only thing I’ll remember about our stay in Agra is that damn toilet and the significant amount of time I spent on it.

(The first photo is from an earlier visit to India when I did make it to the Taj without getting sick!)

Have you been to the Taj Mahal? Is it on your list of places you want to visit?

*Special Request: If you enjoy this site, I hope you’ll consider voting for WanderingEarl.com as your favorite travel blog over at Elliot.org/favorite-travel-blogger. I was recently nominated and am honored to have now made the list of 26 finalists. Any votes would be much appreciated!