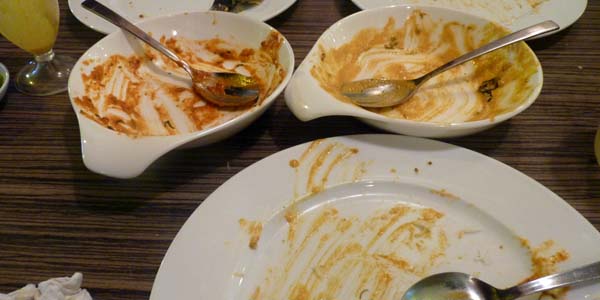 Starting this evening (Saturday), my website might be down on and off over the next couple of days as I work on some things. It should take about 24-48 hours to complete so I expect everything to be back up and running as normal by the end of the weekend.

In the meantime, I didn’t sit down at my computer today simply to provide you with that tidbit of relatively useless information. Even with the possibility of my website being down temporarily, I still want to put up a post. And so I thought I’d use this time to tell you something about me that I have never told you before.

That’s right, worms. I’m not talking about a worm farm or a bag of worms that I carry around with me at all times, but actual worms who seem to have set up quite a comfortable community within my intestines.

Picture this. There I am, during my time as a Tour Manager on board the Queen Mary 2 Ocean Liner, walking into the Officer’s Mess after a long day of work. (Okay, my day actually included a helicopter ride over a volcano and a few hours at the beach but that’s far less dramatic of an opening).

Anyway, I take a seat at my usual table and the waitress soon brings me a menu. After a quick glance at the day’s culinary offerings, I look up at Ivanka (she’s the waitress), our eyes connect and we both smile.

“Everything, no meat?” she asks. I reply with a simple nod of my head, just as I had done every single meal of every single day since my contract had started.

And then, over the following 45 minutes or so, there I would sit, at a table under a series of windows, glancing out at the Pacific Ocean rolling ever so gently by, eating what had now become a typical meal for me. Basically, I would eat at least one of everything on the menu that did not contain red meat (I stopped eating red meat after my first trip to India).

I polished off a large Caesar salad, slurped up a bowl of french onion soup and then devoured a vegetable samosa. Next came the plate of mozzarella cheese and tomato, along with some fresh bread. This was followed by the vegetable lasagne and a plate of chicken curry with rice, and of course, one order of the ginger chili salmon. Finally, I moved onto the desserts, which included a piece of apple pie, a bowl of mixed fruit and a slice of chocolate lava cake.

Other officers would come and go and yet, I, the eating freak, would remain, still trying to satisfy my hunger. Eventually, I would get bored and would leave, but usually I walked out of the mess still somewhat hungry.

This actually went on for almost a year as it took a remarkably long time for me to realize that such an appetite was not normal. What I also failed to realize at the time was that the consumption of such large quantities of food should not be causing me to lose weight either. It was during this year long eating binge that I actually dropped down to the lowest weight of my life.

Eventually, I decided to pay a visit to the medical staff on board the ship, where, after I had described my symptoms to the doctor, blood was drawn and several other tests were performed. And a week later, when I was called back to the medical center while we were en route to New Zealand, the nurse informed me that I was the proud host of a community of worms.

At least it was a multi-cultural community, with a healthy mix of both pinworms and roundworms, which, according to the doctor, could have been picked up from any number of countries I’d visited during my extensive travels around the developing world.

The ship doctor decided to prescribe the strongest medicine possible in order to try and kill all of my worms in one shot. And after only one month, it began to work, although I did have to deal with side effects that included stomach pains, headaches and intense nightmares.

But after that first month, I no longer felt the need to eat the entire menu for lunch and dinner, which not only helped me shake off my reputation as an eating freak but also reduced the cruise line’s monthly food expenses I’d imagine.

The only problem, and some might say that this was a significant problem, was that six months later, the worms seemed to reappear. I actually never saw the worms reappear myself but I’m quite sure they moved back in. (I chose not to try the cellophane-tape-applied-to-the-lower-opening-of-the-digestive-track method of confirming this hunch.)

All I know is that my absurd appetite returned and once again, I felt hungry all day long, no matter what I had already eaten. As a result, I was forced to take another round of medication.

Am I worm-free now? I don’t think so. My appetite is still abnormally large as I regularly throw down three tostadas, two tacos, a quesadilla and a mega-huarache in one sitting here in Mexico. But I’m not losing any more weight at least and I actually feel healthier than ever before.

So what’s the point of all this? Naturally, it’s to bring your attention to the fact that there just may come a day when, after your travels are over, you find yourself wolfing down your ninth chicken parmigiana of the evening, and you start to wonder if that cup of water you drank in a small village in eastern Nepal was such a good idea after all. Or whether or not your favorite street vendor in Panama, the one who shook your hand often and prepared your meals almost every day, ever washed his hands.

When we travel, especially to developing nations in tropical climates, there is always the possibility that we’ll collect more than life-changing memories and a backpack full of souvenirs. We might bring home worms as well, which by the way, should technically be declared on our Customs Declaration Forms, especially if you want to avoid the wrath of your government.