How To Turn Severe Weather Into A Travel Memory

How To Turn Severe Weather Into A Travel Memory

First of all, let me reintroduce myself. Here I am. Wandering Earl.

It appears that more than a few people have been quite confused about my identity over this past week, often mistaking me for someone completely different. I’m not mad or anything. And even though some of you have berated me via email or twitter for what you believed was my seemingly inappropriate and irresponsible behavior, I shall not hold a grudge. After all, I do have to admit that the resemblance between myself and he who I have been mistaken for, is quite uncanny.

Let me take a moment to set the record straight…

This is me, Wandering Earl:
(don’t ask why I’m wearing that hat) 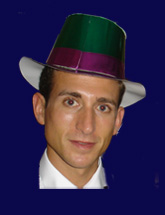 This is Hurricane Earl: 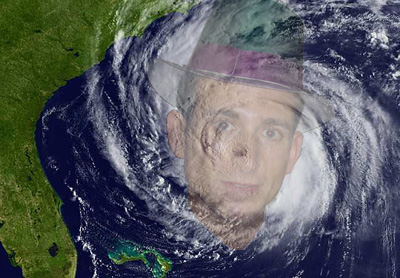 Honestly, that is a different Earl. And while back in college I may have been known to ‘accidentally’ knock over a chair or table after a drink or two, I have never had it in me to wreak havoc on an entire island or coastal community, at least not with the intention of knocking out electricity, snapping trees or flooding homes.

If you need more proof…

Unlike this other Earl, who refuses to answer my email requests for him to pack up and dissipate, my overall physical strength does not increase while over large bodies of warm water and rarely do I have the time to “help maintain equilibrium in the Earth’s troposphere”. As most of you know, I’m a busy guy.

MEMORIES OF ANOTHER STORM

On another note, after watching Hurricane Earl pass through the Caribbean and head towards the East Coast of the US, I was reminded of the last major storm that I encountered during my travels. It was back in 2008 when I was in the small town of Fatehpur Sikri, India about 45 minutes outside of Agra, home to the Taj Mahal.

About two hours after I arrived in town, Fatehpur Sikri started getting pummeled by the first intense storm of the monsoon season. As a result, I was forced to hole up in a nasty guesthouse room for two straight days, with the flash floods, 80 mph winds and impenetrable dust clouds making it impossible for me to even step outside. I just sat on my bed for 48 straight hours, with no electricity or running water, and nothing to do but allow the dust flying into my room through the cracks in the window to envelop me one layer at a time. I also had no choice but to laugh as I watched cockroach after cockroach, spider after spider and rat after rat enter my room through a variety of large holes in the walls, all in search of shelter as well.

However, the storm eventually passed and when it did, I quickly stepped outside, brushed the dust out of my hair, picked the dirt from my nose, walked up to the rooftop of the guesthouse and stared out over the ancient and impressive landscape of eerily quiet palaces, tombs and mosques. The sight was absolutely unreal, as not one thing within my view indicated that I was living in the 21st century. Had someone told me it was the year 1571, I would have simply shrugged my shoulders, thought, “What a crazy dream I’ve been having about the future!” and gone looking for some dry fire wood.

After enjoying the view, I decided to visit the one place where I knew locals would begin gathering now that the storm was over. That place was a popular chai stall I had noticed upon my arrival two days earlier and as expected, it was now full of people milling about and chatting away. I ordered a chai and tried to join in the conversations, unfortunately able to offer little more than a deliberate shaking of my head to indicate my disbelief at the power of nature.

After thirty minutes or so, someone made an announcement and everyone immediately stood up. From what I gathered, it was time to start fixing the damage caused by the storm.

I joined the crowd, much to their surprise, and began wandering through the narrow lanes. We had no real destination it seemed, as the goal involved fixing any damage whatsoever that we found along the way. What I began to experience was the true definition of ‘community’ as we assisted a man in pulling his bullock-cart out of ½ meter thick mud, we bailed the water out of an elderly woman’s tiny one-room home, gathered branches to repair the roof of a small shop and placed sand-bags at one street corner in order to prevent further flooding.

If I remember correctly, we wandered around Fatehpur Sikri for about 2 hours, helping out in whatever way we could, until there was nothing else to fix. At that point, we all returned to the chai stall, drank several cups of the sweet milky concoction and nibbled on what appeared to be four-day-old samosas.

Eventually, I stood up with the intention of walking back to my guesthouse, however, one of the other men in the group grabbed me by the arm and without a word led me down the street once more. Five minutes later I found myself sitting on the floor of a basic, concrete room, surrounded by a dozen ‘cousin-brothers’ and ‘sister-cousins’, all eagerly waiting for me to begin eating the huge plate of freshly prepared channa masala (chickpeas mixed with spices) that was placed in front of me.

Initially, I had planned to stay in Fatehpur Sikri for only two days, but I ended up staying for eight days in the end. During that time, I played cricket every morning at sunrise with a group of local teenagers, I watched Bollywood movies with a dozen giggling children every afternoon and I hung out in shops, chai stalls and local eateries every evening. It was hard to leave this place, mostly because I couldn’t get over the fact that I had instantly been welcomed and treated as part of this small community.

Without a doubt, signing up as a volunteer for an international or even local organization gives us the chance to really do some good in this world. But that’s certainly not the only way we can connect with a community and use our skills, knowledge or even just our two bare hands, to help improve the lives of others. Of course, I’m not saying that we should seek out places prone to natural disasters or travel at times when devastating storms are a guarantee, but inevitably, at some point during our travels we will encounter the force of nature, whether it be monsoon rains, a landslide, heat wave or anything else.

And if we happen to be caught up in such a situation, enduring nature right alongside those whose country we are visiting, this may prove to be the perfect opportunity to make a real difference. Instead of packing our bags and fleeing to the next town as soon as the storm is over, why not stay a while and offer some assistance? As with the above example, the result of such a decision is often rewarded with a sense of community that we don’t always experience as travelers constantly on the go.

Have you ever had an encounter with severe weather while traveling?